Chris’ note: Master trader and friend of the Cut Jeff Clark has been keeping busy during quarantine. He hasn’t let the pandemic get in the way of scoring his subscribers huge profits. Since the start of the year, he’s handed readers the chance to book six different gains of 100% or more.

Now, he’s teaching his 18-year-old son everything he knows about trading… and wants to teach you too. That’s why, this Wednesday at 8 p.m. ET, Jeff’s hosting a free online training session. He’ll walk you through all the steps of the trading technique he uses to double his money. He’ll even give away a free stock recommendation.

Make sure to reserve your spot here. And read on below for more on why Jeff decided to host this special event.

On August 26, I’m doing something I never imagined I’d do…

My 18-year-old son, Carson, will sit down with me at our kitchen table in California. And he’ll attempt to double his money using the same trading technique that helped me retire when I was just 42.

But then again, it’s been a strange year…

Just one example… thanks to this pandemic, I’ve barely left the house in five months.

Now, that’s not really a big deal for me. I’ve been working from home for close to 15 years. I have everything here that I could ever need. But, for some people, this whole situation has been hard to get used to. Take Carson, for example…

Ever since the coronavirus pandemic hit the U.S. and everything shut down, Carson’s been spending a lot more time at home.

He graduated high school this year. But, due to the shutdown, he wasn’t able to walk across the stage and claim his diploma. He missed out on his senior prom. His last semester of classes was over video chat…

It’s a shame Carson couldn’t experience the things most kids get to do in their senior year of high school.

But, there is a bright spot to all this.

With all this time at home, Carson has taken an interest in what I do for a living. He sees the type of money I’ve made over my 36-year career… and continue to make every day.

In fact, he’s been impressed that I’ve identified and shared six different opportunities this year that could have doubled your money… while many other people in the market have lost money or sat on the sidelines.

You see, I’m a trader. I make a living by profiting off short-term moves in the stock market.

I was hooked back in 1987, when a single trade just before Black Monday made me 10 times my money. Once you experience that kind of profit, it’s hard to imagine working a regular office job ever again.

I love my job. I’ve been trading for basically my entire career, and even managed to retire at 42 years old – 25 years earlier than most folks – by building a money management firm and selling it in late 2007.

I’ve often said trading is the one job where you can end the day with less money than you started. But, at the same time, you can wind up making so much money that you can take off the rest of the week… or the month… with nobody to answer to.

Heck, you could even take an impromptu vacation. I certainly have. Here’s a photo of Carson and me from our trip to Cape Cod last year. 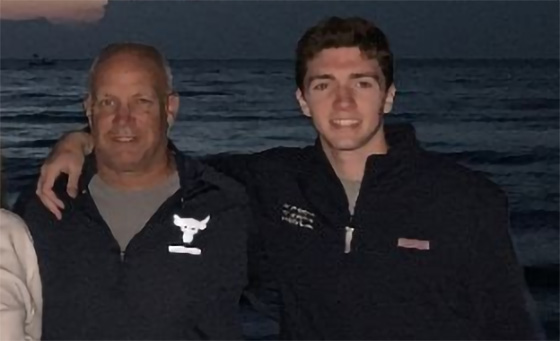 Carson and me bonding at Cape Cod last year

Now, when your job is to trade the markets, of course there are risks. Like I said, it’s possible to work all day and wind up paying to do it.

But, if you trade like I do, you can mitigate those risks, consistently make profits… and do so in a way that leads you to true financial freedom.

Why I’m Not Really “Retired”

Of course, trading isn’t my only job. My other passion in life is writing. And I’ve been lucky to find a way to combine the two.

You see, for the past 15 years or so, I’ve been publishing my best trading ideas and analysis to a small group of dedicated readers.

A lot of folks ask me why. After all… if I wanted, I wouldn’t have to work – or even trade – another day in my life.

I do it because continuing to write about and trade the markets keeps me sharp. And sharing my ideas holds me accountable, so I’m always improving and finding the best opportunities the market hands us.

And nothing makes me happier than helping everyday folks make money trading the markets – even during market crashes.

You see, market crashes can be like Christmas for traders like me. Where most investors fear volatility, it actually helps out folks like me who take advantage of extreme short-term moves.

So far this year, I’ve sent my readers several great opportunities. Across my services, we booked six separate gains of at least 100% – some much higher. Some people have even written in telling me that my trades have helped them recover everything they lost in the initial crash.

Those are the kinds of happy stories I want to hear every single day. That brings me back to my son Carson…

He’s been watching me carefully these past few months. He started waking up earlier to peek over my shoulder during my morning chart review. He’s asking questions about the stock market throughout the day.

Like a lot of kids his age, he’s seen the recent market crash as an opportunity to buy stocks and start building a portfolio for the future. He’s been fascinated by the moves in controversial stocks like Tesla (TSLA), Hertz (HTZ), and Kodak (KODK)…

All in all, it’s become clear he wants to learn to do what I do. He understands that if he can become a great trader, he’ll have the freedom to do whatever he chooses with his life. And I’d rather he learn from me than anyone else.

So I’m going to teach him. On August 26 at 8 p.m. ET, I’m giving Carson a crash course on trading. Then, he’ll attempt to double his money with my trading technique… and you’ll get to watch every moment of our training session, from start to finish.

My goal is to provide you a ton of great info, all of which will make you a better trader… completely for free. In fact, you’ll receive a FREE recommendation during the event… a chance for you to double your money by placing a single trade the morning after the event.

As for Carson’s trade, I hope he can pull it off…

He’s going to put his own money on the line – money that he earned doing landscaping work in our neighborhood last summer. This way, he’ll really understand what it’s like to trade the markets and risk losing his own hard-earned money.

I’m going to guide him along through the process, but whether he wins or loses is entirely on him. I won’t bail him out, and he knows that. If he loses money, he won’t be reimbursed… not by me, my publishing firm, or anyone else.

I hope he succeeds. And I hope that by joining me on August 26, you’ll be able to tell me and Carson your own happy story in what’s been such a difficult year.

If you haven’t already, sign up for the event right here. You don’t want to miss it.