The news headlines were filled with coronavirus panic.

And the U.S. stock market had its worst week since the 2008 global financial crisis. 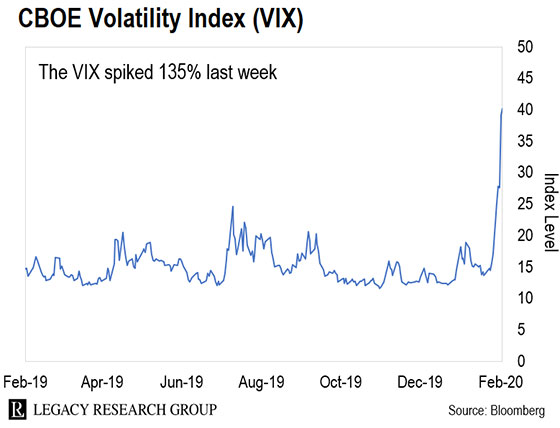 This has sparked fears that the coronavirus has killed the 11-year bull market on Wall Street.

And as you’ll see today, “Market Wizard” trader Larry Benedict says more gains are on their way over the coming days.

Larry is one of the world’s greatest living traders…

That includes 2008. In a year when most American households lost 25% to 30% of their net worth, Larry generated $95 million.

And between 2004 and 2012, Larry and his firm generated more than $274 million for themselves and clients.

So it’s no surprise that, last Monday, CNBC turned to Larry for insight on the tumble in stocks. From that report…

“The second-largest economy in the world [China] is completely shut down. People aren’t totally pricing that in,” said Larry Benedict, CEO of The Opportunistic Trader, adding a 10% to 15% correction in stocks may be starting. He also said some parts of the market, particularly large-cap tech stocks, appear to be over-owned. “It seems like there’s much more to come.”

As I mentioned up top, after Larry’s call, investors took stocks to the woodshed.

We saw the biggest fall in stocks since 2008. And investors dived into safe-haven bonds.

It’s natural, as an investor, to feel scared at a time like this.

But Larry says selling now would be a big mistake. That’s because he sees a rally off of last week’s low.

I (Chris) also pass along ideas and recommendations from the world’s top traders. Guys like Larry, Jeff Clark, and Andy Krieger, who’ve made millions for themselves and their clients trading both bull and bear markets.

That’s especially important now, with so many investors in panic mode. You see, traders can profit when stocks fall as well as when they rise.

And that makes them different from long-term stock market investors… who can make money only when their stocks go up in price.

It may sound crazy… but traders actually like when volatility (aka stock price swings) shoots up.

That’s because big moves in one direction… lead to big countermoves in the other direction.

Readers of master trader Jeff Clark will know what I mean…

Jeff calls it the rubber-band effect. And it’s what allowed him to make so much money in 2008… when most investors were getting slaughtered.

That year, Jeff gave his subscribers the chance to book gains of 100% and higher 10 different times.

We can all tell when a rubber band has been stretched close to the limit. The rubber at the center of the band stretches thin. Its color fades. It even starts to vibrate a bit. That’s usually when it snaps back.

The same goes for the stock market. Jeff again…

It’s a little harder to tell when the snapback is coming. But there are clues…

Stock prices stray far away from their averages. The technical indicators I watch on the charts reach extreme conditions. And TV’s talking heads all pile onto the same side.

That’s when the logical-thinking trader decides it’s time to bet on the rubber band snapping back.

He sees the rubber band stretching back after last week’s losses.

CNBC reached out again to him on Friday. And he called a bottom for this trade. As CNBC reported…

“I think the bottom is in for this trade,” he said. “The markets washed out in a big way. I don’t think we come out here in a straight moonshot, but potentially we get a bit of stabilization and a bit of an uptrade here.”

So if you’re nervous… and feeling like selling your stocks after last week’s rout… hold off. If Larry is right, we’ll see the bounce continue this week.

Does that mean stocks are out of the woods and the bull market is going to continue?

More on that in tomorrow’s dispatch. I just got off an interesting call with Jeff. And he says he’s looking out for a specific “test” that will tell him if the bull market will live or die.

Stocks are bouncing today. But that’s nothing compared with another under-the-radar kind of speculative investment.

I’m not talking about stock warrants… or options… or even bitcoin.

Like I said, they’re still under most folks’ radars. But I’ll tell you more about them later this week. So stay tuned for more on that.