I hope you had a great Thanksgiving yesterday with your family and loved ones.

In this week’s mailbag edition of The Daily Cut, our tech expert, Jeff Brown, asks whether it’s time to short the world’s most valuable automaker, Tesla.

And our “billion-dollar trader,” Jason Bodner, reveals how he used his Big Money Index to time the bottom of the COVID-induced stock crash last March to within one trading day.

First, a worried reader wants to know if his crypto portfolio is safe from exorbitant tax rates.

Standing by with a response is colleague and world-renowned crypto investing expert Teeka Tiwari.

If you don’t already know him, Teeka was the first guy in our industry to focus an advisory solely on crypto. He first recommended cryptos to his readers back in April 2016.

Reader question: I am a bitcoin believer. I support the idea of bitcoin being the safest currency alternative against the dollar. But I am concerned about governmental restrictions, such as exorbitant tax rates. Can you address this?

Teeka’s response: I’ll begin with something I’ve said from the start. Report your crypto gains. Pay your taxes. And don’t mess with the IRS.

Under U.S. tax law, you have to prove your innocence. The IRS automatically assumes you’re guilty. That means it can put you in jail and take all your assets. It can make your life miserable.

Criminalizing Americans if they don’t dot an “i” or cross a “t” makes me sick. This should be a civil, not a criminal, matter.

Let’s say you get some crypto airdropped into your digital wallet. In other words, a crypto startup sends you some free coins as part of its marketing campaign. And let’s say you forget to report that airdrop to the IRS. You’ve technically committed a felony. That’s ridiculous.

In the U.S. legal system, the pendulum tends to swing too far in both directions. Right now, it’s swinging too far toward a punitive approach to crypto tax reporting. My hope is it will swing the other way.

But if you’re concerned about taxes on your crypto, you can move somewhere that has a better tax regime. In Puerto Rico, I don’t pay any capital gains tax. That’s why I moved here in 2017. So if you want to legally reduce or even eliminate your tax burden, you have options.

Switching gears, that question for Jason…

Before joining us at Legacy, he worked on Wall Street. He was one of the few guys authorized to make trades of $1 billion – and up. He spent nearly 20 years placing these monster trades for some of the world’s wealthiest investors.

He now uses artificial intelligence (AI) as part of his proprietary system that spots when big-money investors start piling into the market’s strongest stocks.

He also uses this system to spot temporary market tops and bottoms.

Reader question: Before the COVID crash last year reached its bottom, you posted a video about stock market crashes and how to know roughly when they’ll bottom out.

And your prediction of when the S&P 500 would bottom was accurate to within a day.

Could you give a synopsis of how you came up with that prediction? Anything you could share about how we can recognize a reversal off new highs would also be intriguing.

Jason’s response: Hey, Graham. Thanks for writing in. I use the Big Money Index (BMI). It’s something that my research partner and I invented.

Basically, the BMI scans all the stocks in the U.S. daily and figures out when the big money is buying or selling. When you smooth those daily signals over a 25-day moving average, you can clearly see those money flows.

In mid-March of 2020, when the COVID crash was in full swing, the BMI (squiggly blue line) went oversold (horizontal green line). Then I took a 30-year average of how long it had taken after going oversold for the S&P 500 to bottom. 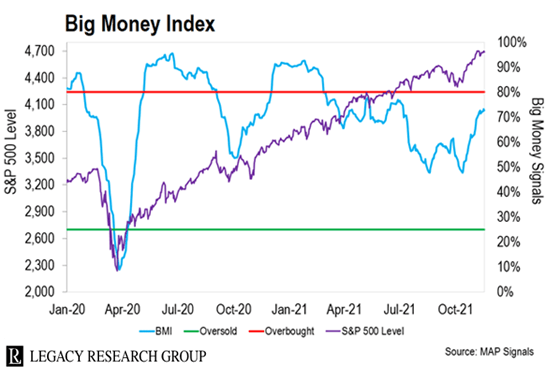 The bottom came one trading day later – Monday, March 23. So you’re right. I was off by a day.

We’ll wrap up today with that question for Jeff…

As I showed you last month, Tesla (TSLA) just became a trillion-dollar stock…

But as its share price has skyrocketed, its valuation has become unmoored from reality.

The market currently values Tesla higher than all the world’s other automakers combined.

And the only way that makes sense is if, 20 years from now, everyone is driving electric vehicles (EVs)… and all of them are Teslas.

As I’ve said before, that doesn’t pass the sniff test…

It’s far likelier everyone will be driving EVs… but only a fraction of these will be Teslas.

Reader question: Jeff, I read every article you publish and want to thank you for everything you do. Yours is by far the best research service on the planet. I use you exclusively.

Your take on Tesla seems to be bullish. And understandably so. You recommended it long ago, when everyone called you crazy.

Lately, you have mentioned on several occasions that you’re not sure about being a buyer at the current valuation. And you’ve said that Tesla’s stock is destined for a big pullback.

Why not short the stock?

You’re correct. I’m a big fan of Tesla. It’s one of the most advanced AI companies in the world. It also has remarkable EV battery technology. It put all this bleeding-edge tech into fantastic cars and trucks.

My view is that Tesla is the most advanced self-driving-tech company on the planet. And unless you own a Tesla and had the original self-driving kit, it’s hard to understand how advanced its self-driving capabilities have become.

That said, Tesla has become a very expensive stock.

It has an enterprise-value-to-sales (EV/S) ratio of roughly 25. That means investors are paying $25 for every $1 of current sales. That’s crazy considering the company has gross margins of only about 23%. So only a quarter of its sales revenues fall to the bottom line.

Given all that, would I bet on Tesla’s share price falling by shorting the stock?

No. Just because a stock is overvalued doesn’t mean it can’t go higher.

Irrespective of its relatively low margins, Tesla continues to grow like wildfire. It’s gushing free cash flow. And it has a huge army of dedicated investors. So it’s not a stock I’d short.