Vladimir Putin’s attack on Ukraine will be his undoing…

Right now, most of the media’s attention is on the human suffering in Ukraine.

It’s heartbreaking on so many levels…

Russian troops are shelling civilians in the cities of Kharkiv, Mariupol, and Kyiv… the Russian foreign minister has warned of a nuclear “third world war”… and 450,000 Ukrainians have sought refuge by crossing into Poland.

Putin may view the carnage he’s unleashed as a “success.”

But as you’ll see today, its long-term effects are a disaster for his regime and the Russian economy.

In short, a different world is unfolding. And it’ll rely less on Russia’s main exports – oil and natural gas.

Wind, solar, and nuclear will generate more of our electricity. And rechargeable batteries – not internal combustion engines – will power our cars and trucks.

And as I (Chris Lowe) will show you today, it has profound implications for one of the biggest market megatrends on our radar – the transition from oil, natural gas, and coal to zero-carbon fuels.

You may not be nodding along with me…

Some folks are skeptical on the science. Others see it as the most pressing issue of our time.

That’s why Putin’s invasion of Ukraine is a watershed moment.

Cutting our dependency on oil and natural gas is no longer just about going green. It’s now also a matter of nations securing their energy supplies.

This is especially true in Europe.

About a quarter of the European Union’s energy needs come from natural gas. And Russia pipes about a third of that gas across Ukraine.

Europeans use natural gas mainly for to heat their homes and cook with.

In my native Ireland, where I’m writing to you from today, there have been about 35 separate gas and electricity price hikes over the past year.

Europeans also rely on Russian gas to produce food. It’s essential for making fertilizer. It also heats the industrial-scale greenhouses where we grow fruits and vegetables.

This is already affecting supplies of tomatoes, bell peppers, cucumbers, and more.

This one data point highlights how severe this crisis is: About 70% of all Bulgarian greenhouses failed to produce crops this winter due to spiraling gas prices.

That gives Putin leverage over European governments – something they resent.

It’s all in this next chart. It tracks the price of U.S. crude oil – aka West Texas Intermediate (WTI) – and Brent crude oil, the international benchmark. 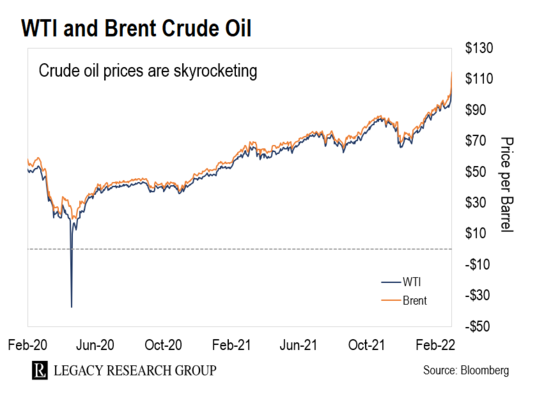 As you can see, the price of a barrel of the black goo has leapt from about $55 a barrel for Brent crude in February 2020 to about $114 today.

And the jump is even more startling for WTI. You may recall that the price of WTI oil for future delivery went negative toward the beginning of the pandemic in April 2020.

But as I type almost two years later, a barrel will set you back about $111.

That’s even more than the surge when Saddam Hussein sent Iraqi forces into Kuwait on August 2, 1991, at the start of the Gulf War.

In 1991, the average monthly price of oil in the U.S. climbed from $17 a barrel in July to $36 a barrel in October before coming back down.

And it compares these three ETFs (exchange-traded funds) to the performance of our regular stand-in for the U.S. stock market, the S&P 500.

Investors see the writing on the wall.

If the West wants to stand up to Putin, it can’t rely on Russian fossil fuel exports.

Putin sees America’s and Europe’s energy distress as the perfect time to pounce. The only answer is to accelerate the move away from oil.

I doubt the West will be able to cut oil demand fast enough to matter. But it’ll try. It’s the only choice to get out from under Putin’s thumb.

And it includes the transition from gas-powered cars and trucks to EVs. The U.S. government has already pledged billions of dollars to this transition. Now it’ll be even more.

Dave is putting his money where his mouth is…

And he just bought a copper mine near a town called Kenmare in the southwest of Ireland to profit from the EV boom. Dave again…

Copper is one of the most important “hard tech” parts of EVs. Hard tech has been a big focus for me lately. It combines a multitrillion-dollar tech trend – EVs – with the multitrillion-dollar infrastructure trend. Add those numbers… and you get insane gains. So copper – along with battery metal lithium – is top of the list.

About 50 pounds of copper goes into regular cars. EVs have more than three times that amount – about 180 pounds. It goes in the battery to some extent, but mainly in the wiring. It also goes in charging stations. After more expensive silver, it’s one of the most conductive metals.

There’s a lot of copper down here in Ireland. I visited a couple old mines yesterday. I’m looking at rebooting them. In a few years, Europe will probably be the biggest manufacturing center for EVs on the planet. I’m finding these early-stage opportunities to feed into the whole EV boom.

But Dave isn’t saving all the profits for himself…

Take his recommendation of Blink Charging (BLNK). It’s a leading owner and operator of EV chargers.

Dave recommended his readers profit from BLNK using a type of investment called a stock warrant, which you can buy through your brokerage.

It blasted 2,805% higher over the 21 months he held it in the model portfolio.

And as I’ve been spreading the word on all week, the average gain on his five EV-related recommendations so far is 867%.

I’m running out of space today. But Dave’s hosting a special online briefing tonight at 8 p.m. ET to share all the details of the even bigger opportunity he sees ahead.

You see, he’s found a tiny company in a small subsector of the EV industry that he says could shoot up 5,000% in the next 12 months.

He’ll tell you all about it tonight… along with what he’s learned on his boots-on-the-ground research trips.

So if you’ve already signed up, make sure to set an alarm for 8 p.m. ET. And have a pen and paper with you. You’ll want to take notes.

If you’re not already signed up, don’t worry. There’s still some time to reserve your free spot here.