Chris’ note: Colleague Teeka Tiwari is a world-renowned crypto investing expert. But he stresses the importance of diversifying your portfolio across different asset classes.

And he recently got important insight on that somewhere you might not expect – the Miami Grand Prix car race. Below, he shares what he learned… why it led to the biggest change at his Palm Beach Letter advisory since 2016… and how you can put your money where the ultra-wealthy do.

Formula 1 (“F1”) races are some of the most prestigious events in the world. The inaugural race in Miami was no exception.

F1 race cars are custom-built. And they’re worth millions. Red Bull sponsored the car Max Verstappen, the winner of the Miami race, drove. It cost over $20 million.

But as exhilarating as the race was… the real excitement was getting to rub elbows with some of the richest people on the planet. I was anxious to find out where the mega-rich were putting their money.

Teeka at the Miami Grand Prix

I also recognized plenty of lesser-known mega-wealthy folks. During the race, I asked them what they were doing with their money amid this market turmoil.

Their answers stunned me.

I spoke with some of the world’s biggest, most passionate car collectors. So it’s no surprise they’d love to own high-performance sports cars.

But that’s not all they’re buying.

A few even mentioned buying condos in downtown Miami – where high-end units are going for $5–6 million.

Many said they’re also buying millions of dollars’ worth of luxury watches and blue-chip art.

That’s when, amid the engines’ roar, I realized: They’re not buying these things as just a hobby…

They’re buying them to protect their long-term wealth.

Like you and me, today’s ultra-wealthy are concerned about inflation. In fact, according to a report by global wealth consultant Knight Frank, it’s their top concern.

We’re in a “New Reality of Money.” Obscene money-printing and out-of-control inflation have perverted the normal rules of money.

I own boats and cars I bought between three and five years ago. They’re now worth more than what I originally paid.

Friends, that’s not normal. It should never have been able to happen.

My biggest personal winning investment over the last 12 months hasn’t been in crypto. It’s been in luxury watches. I have watches with values that have soared as much as 800%.

Even with the global pullback in asset prices, many of these watches are off only 15% from their highs.

The Consumer Price Index (CPI) is a common measure of inflation. This chart shows how the CPI has risen since the start of the 21st century: 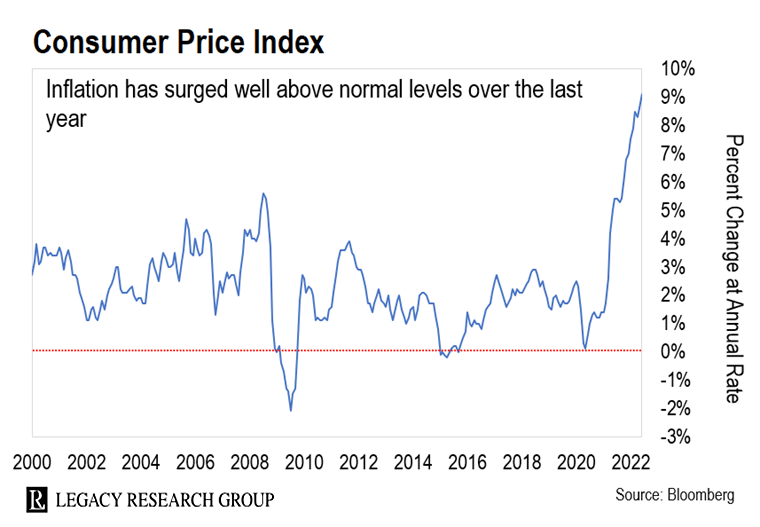 The wealthy are watching their cash reserves melt like ice cubes in the Miami sun. They’re desperate to protect their buying power as inflation hits its highest since 1981. Since the early 1980s, inflation has eroded the purchasing power of $1 to about 36 cents.

So the wealthy want some real wealth they can hold in their hands, put on their wrists, or admire in their 20-car garages.

Instead of sitting on cash or allocating the bulk of their assets to stocks and bonds… they’re buying assets that appreciate much faster than inflation.

In contrast, many everyday investors still follow the classic 60/40 model.

The “60/40” refers to the traditional portfolio split of 60% stocks and 40% bonds. Many financial advisers and institutions still recommend this ratio.

But my research says this model won’t grow fast enough to keep up with the New Reality of money-printing and out-of-control inflation.

You might be thinking, “Hey Teeka, the Fed is raising interest rates now. So inflation should come under control.”

I know. But the Fed will stop raising rates much faster than the everyday investor thinks.

Here’s why I think so…

The yield on the two-year Treasury note is already rising above the yield on the 10-year note. That’s the bond market telling you it thinks interest rates will fall in the future.

Stocks will rally once the Fed stops raising rates. That’s great news. But it’s not enough to combat the New Reality of Money. 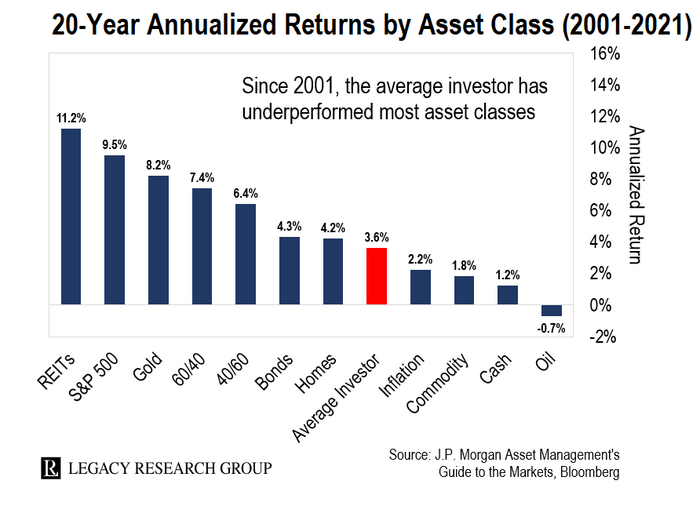 And since the creation of that chart, inflation has shot up to its current annual rate of 9.1% as of June. That means inflation is now 2.5x higher than Main Street’s average yearly return.

The yield on the 10-year Treasury is 2.6%. With inflation north of 9%, you’re losing 6.4% per year in purchasing power with this bond.

And that gap is growing every year.

No matter how hard you work, how many extra shifts you pick up, or how many more work meetings you slog through, your standard of living will continue to decline.

It’s not your fault.

Even if you scrap every luxury you allow yourself – a weekend getaway, an evening out with your spouse, something nice for the kids, an expensive cigar – it’s not enough to bridge the ever-inflating gap between the lifestyle you used to have and the life you’ll have next year and the year after that.

Remember what the rich are doing.

A recent Ernst & Young survey found that 81% of ultra-high-net-worth people now invest in these and other alternative assets.

Meanwhile, everyday investors allocate less than 5% to alternative investments. Is it any wonder the Main Street investor is getting left behind?

As more investors diversify into alternative assets, I expect we’ll see even bigger returns from these nontraditional investments.

The good news is you don’t have to buy a Ferrari, a Picasso, or a multimillion-dollar condo in Miami to protect yourself against inflation.

There are strategies anyone can use to invest just like the ultra-wealthy. You just need a game plan.

Since I took over my flagship Palm Beach Letter advisory in 2016, our average annual gain is 148.5% – even with this current market pullback.

By comparison, the average annual gain of the S&P 500 over the same time is about 13%.

But as times change, we need to change with them. And to help you navigate this New Reality of Money, I just made the biggest change in seven years to the asset allocation model we use at Palm Beach Research Group.

I now recommend allocating 50% of your portfolio to stocks… 20% to fixed income, or bonds… and 30% to alternative assets. 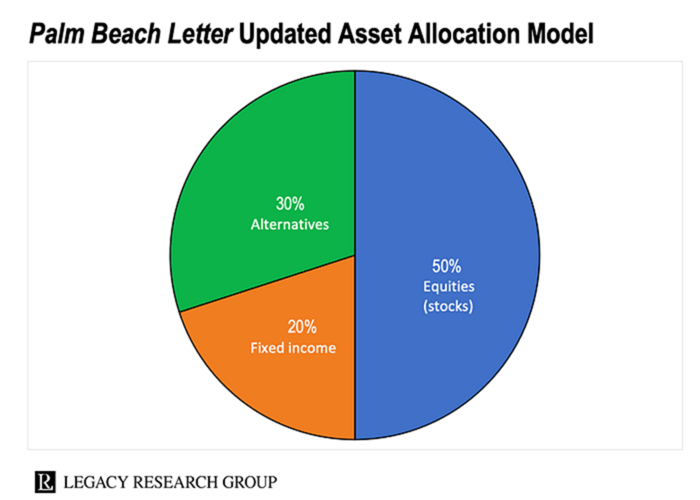 Don’t know how to start investing in alternatives?

My team and I have been tracking ways you can fractionally own classic cars and blue-chip art.

With fractional investment, the owner of an asset can list that asset on a platform and offer shares (or fractions of the asset’s value) to investors.

This is now available for everything from supercars to luxury real estate.

One platform I recommend is Masterworks. It allows you to get fractional ownership in some of the world’s most desirable paintings for as little as $20.

It’s a great first move to add some inflation-beating alternatives to your portfolio.