Ask most Americans if the U.S. is a capitalist country, and they’ll say yes.

You may even be one of them…

But America is NOT a capitalist country.

Every time there’s a crisis, the government suspends capitalism… and switches to something much closer to socialism.

Washington is now paying cash to over 80% of Americans, to the tune of $560 billion. It’s also authorized $500 billion in new spending to bail out corporations.

Meanwhile, the Fed is backstopping the stock and bond markets with what Minnesota Fed president Neel Kashkari described as an “infinite amount of cash.”

It’s why I hope you follow our advice today and buy gold as an alternative store of wealth.

As colleague Teeka Tiwari put it to our Palm Beach Daily readers, “What is money really worth if you can print an endless supply of it?”

Each day, hundreds of new readers sign up to a Legacy Research publication for a source of rational insights into how to make money in the markets.

That includes in the kind of crisis we’re living through today.

It’s why, each day, I bring you the best ideas and insights from Bill Bonner, Doug Casey, Teeka Tiwari, Jeff Brown, E.B. Tucker, and the rest of the Legacy Research team.

From time to time, I also talk to the advisors and experts in their Rolodexes.

And one of the biggest profit themes on our radar is gold.

The case for gold is simple…

The Fed is right to say the supply of the dollar is infinite. It can create as many dollars as it likes by marking up bank accounts.

And that’s what we’re going to see unfold…

Every central bank in the world is about to dilute the value of the government currency it manages at a scale we’ve never seen before.

That’s where gold comes in. Governments and central banks can’t create it at will. That means it’s going to be a better store of wealth as governments fire up the money-printers.

If you don’t already know him, Rick is an old friend of Legacy Research cofounders Bill Bonner and Doug Casey.

He’s been involved in natural resource investing since the early 1970s.

Rick is also a leading expert on natural resource stocks… and gold.

Last week, I spoke to him by phone. (Members of our Legacy Inner Circle advisory can catch up in full here.) And he told me that the surge in the gold price will come as a result of three things. Rick…

First, the Fed is doing more quantitative easing… or QE… which is what you and I would call counterfeiting if we did it. There have been enormous increases in the money supply without any increase of the backing of the currency. Which is to say the currency is being debased massively in front of us.

Second, the government is financing massive fiscal grants. The $2 trillion bailout is a Christmas tree of spending programs for politically connected and politically expedient things that had little to do with the coronavirus.

Third, central banks are manipulating interest rates lower. So at the same time that the creditworthiness of government bonds declines, the income that investors earn on them declines, too.

The response to all of this, Rick told me, is a move higher for gold. And it could be an even bigger move than the 166% rally for gold after it started to take off in the wake of the 2008 crisis.

How do you get exposure to the gold bull run?

As I showed you on Wednesday, it’s now nearly impossible to get your hands on gold bars and coins.

And if you can find some gold, you’re going to have to pay a premium over the gold spot price. (One dealer we talked to said he’d charge 10% above the spot price.)

In short, there’s a gold “crunch” going on…

That’s what happens when everyone rushes out and buys “disaster insurance” all at once.

To make matters worse, key refineries in Switzerland have shut down due to the coronavirus pandemic.

So right now, you have two main choices…

First, you can pick up shares in the Sprott Physical Gold Trust (PHYS)…

This is an exchange-traded trust Rick and his colleagues at Sprott Inc. created.

It’s the next best thing to holding actual gold.

That’s because PHYS shares are fully backed by physical gold, and can actually be redeemed for the metal.

A key advantage for PHYS is that Sprott stores its gold in a fully allocated account at the Royal Canadian Mint, meaning that the fund holds titles to specific serialized gold bars.

This is in contrast to ordinary gold exchange-traded funds (ETFs) such as the SPDR Gold Shares ETF (GLD), which holds its metal in unallocated accounts. That means it doesn’t have titles to any specific bars. The ETFs simply have agreements with custodian banks to provide certain amounts of gold. This creates an inherent counterparty risk that leaves the funds vulnerable should the custodian go under.

Another option is to buy gold mining stocks…

Typically, what we see when stocks crash is that everything falls with them… including gold and gold stocks.

That’s because leveraged traders sell everything that’s not bolted to the floor to satisfy margin calls.

But after an initial dip… gold and gold stocks take off.

Take a look at what happened after the dot-com stock crash that began in March 2000. 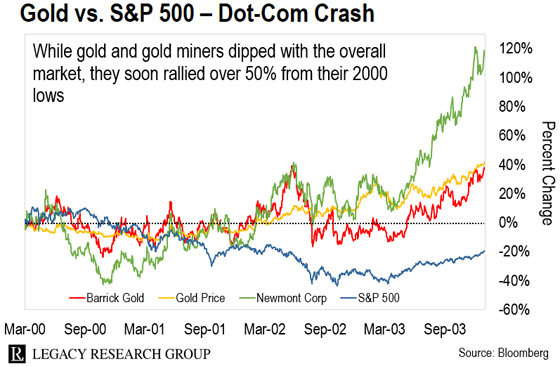 The same thing happened after the 2008 crash. Take a look… 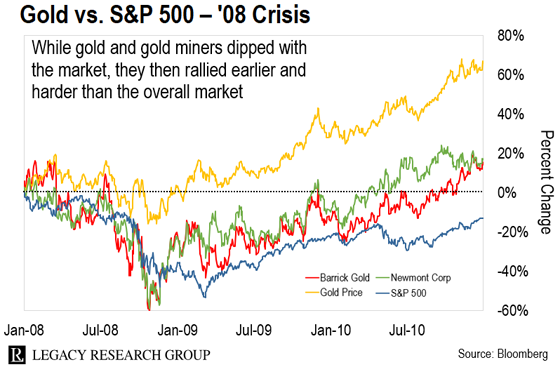 Again, we saw the prices of gold and gold miners fall with the market… then bottoming and rallying before the overall market began to recover.

As he put it during our call…

Your readers need to grasp that, in the near term, gold stocks are stocks. When the margin calls are made, all stocks get sold off… including gold mining stocks.

In each circumstance, gold started to move three or four months after the crisis.

Look out for more on this subject in future updates.

Right now, the important takeaway I have for you is that you want to own gold.

I recommend you steer clear of paying a premium to own the physical stuff… and opt for something like PHYS instead.

And for extra oomph… you can own a basket of the world’s largest gold miners through the VanEck Vectors Gold Miners ETF (GDX).

Just make sure to own gold as part of a sensible asset allocation plan like the one colleague E.B. Tucker lays out here.