“Trees don’t grow to the sky”…

The tallest tree in the world is a redwood in California.

And it’s 379 feet tall. That’s taller than the Statue of Liberty, which stands at 305 feet.

That’s impressive. Nobody expects Hyperion to grow to 379 miles tall. That would be ridiculous.

But you can bank on stock market investors to forget this simple truth – nothing goes in one direction forever.

And when stocks they own pull back… even if it’s not a significant loss relative to the gains they’ve been making… investors often panic and sell.

Take the pullback in tech stocks that’s been dominating the headlines in the mainstream financial press lately.

One of our regular stand-ins for the tech sector, the Nasdaq-100 Index, is down 8% this month.

But as you’ll see today, the worst thing you can do is panic and sell after a pullback like this. If you’re in the right tech stocks, history shows these pullbacks are opportunities to buy, not sell.

Together, they make up the Legacy Research team.

As your editor, I (Chris Lowe) make sure you’re plugged into the most profitable opportunities they put on their readers’ radars.

And some of the biggest opportunities we track for you and your fellow readers are in disruptive new technologies. It’s why we’ve spilled so much digital ink on 5G, blockchain and cryptocurrencies, self-driving cars and trucks, artificial intelligence, gene editing, and quantum computing.

You see, in 2015, we invited Silicon Valley insider and tech-startup investor Jeff Brown to join the Legacy team.

Since then, we’ve launched three tech-investing advisories with Jeff – The Near Future Report, Exponential Tech Investor, and Early Stage Trader – to track these trends… and more.

And he’s given his paid-up subscribers the chance to close out tech stock recommendations with gains of 239%… 259%… even 277%.

And rest assured, we continue see a bright future for tech thanks to exponential growth in tech innovation.

So are we worried about the pullback in tech at all?

First, we’re nowhere near the kind of nosebleed valuations we saw at the peak of the dot-com bubble at the end of the 1990s.

Second, investing in bleeding-edge tech stocks with massive growth potential will feel like a roller coaster much of the time. It should come as no surprise that there are dizzying ascents… and nauseating plunges.

And just like with a roller coaster, the reason tech stocks plunge so hard is they first experienced a massive surge.

It’s an on online discount furniture store. And investors can’t get enough…

Or take Tesla (TSLA)… The world’s most high-tech automaker shot up 590% from its March lows to the end of August. It has since fallen by as much as 34%, and is still down 17% on the month.

Or Zoom (ZM)… The video conferencing company has seen a boom in new users since the pandemic began. And its stock soared 326% from March to August.

Those are scary price falls for many investors…

And if you’re tuning in to the mainstream media… it might seem like tech stocks are a bad place for your money.

But the following two things can be true at the same time: Today’s best-in-breed tech companies could be the most successful stocks in the world over the next few decades. Along the way, they’ll plunge several times… even crash spectacularly.

This is just the way some tech stocks trade. They’re so successful, investors have a hard time reining in their exuberance. This causes big price rises… followed by big price falls.

But if you want truly life-changing profits… the key is to sit tight and do nothing as share prices gyrate.

That’s what history teaches us…

Apple’s “market cap” (the sum of all its outstanding shares) is higher than the combined market cap of the top 100 companies listed on the London Stock Exchange.

But there were major bumps along the way. Over that time, Apple’s stock has fallen by more than 75% on three occasions. And it’s been cut in half eight times.

But NFLX investors have experienced two different 75% drops and many drops of 25% or more. 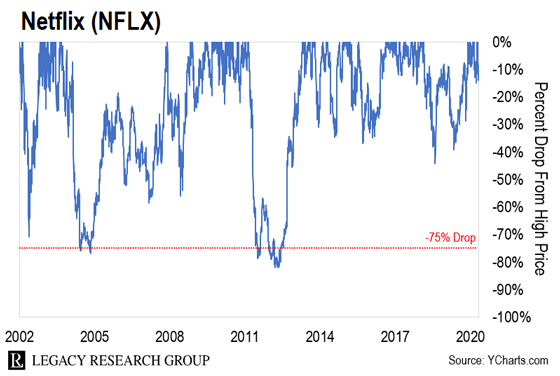 Nvidia (NVDA) is another example of how eye-popping returns don’t come in a straight line.

Since its IPO (initial public offering) in January 1999, the specialized chipmaker’s share price has shot up by 31,220%. That’s a 30% annualized return.

But NVDA hasn’t been immune to sharp drawdowns. It has seen four different periods of dropping more than 75%. 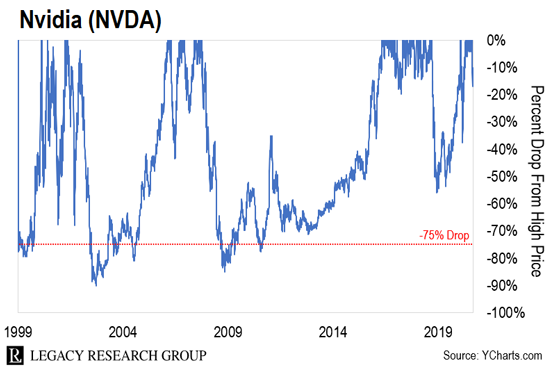 So the next time you hear one of TV’s talking heads wring their hands over the pullback in tech stocks… remember this history.

Price falls like we’ve seen in tech this month are par for the course. If anything, you should use them as opportunities to buy more of your favorite stocks.

And look out for tomorrow’s dispatch… We’ll look at a new breed of traders that’s largely responsible for a lot of the recent volatility in technology stocks.