Chris’ note: Tonight’s the night… At 8 pm ET, our natural resource investing guru, Dave Forest, kicks off his Super Spike Summit. It’s all about recurring periods he calls Super Spikes. They’re when commodities prices skyrocket across the board. And 2022 is setting up for one of the biggest spikes in history.

There’s still time to secure your spot for Dave’s event. So if you haven’t already, make sure to register for free here.

Then read on to learn more from Dave on what past Super Spikes can teach us about how to profit from these windows. As you’ll see, one of the biggest Super Spikes was in the 1970s. And it’s no coincidence that inflation, war, and geopolitical turmoil were in the headlines back then too.

As I showed you yesterday, we’re at the start of something I call a commodities Super Spike.

These are recurring windows when prices for many key commodities skyrocket.

They typically happen when inflation, wars, and geopolitical turmoil hit the headlines.

That’s what makes this year’s Super Spike such a massive profit opportunity… particularly as tech stocks and crypto prices fall.

Supply chains have been strained – partly because of Russia’s ongoing war on Ukraine.

We’re more worried today about global instability and vanishing paper wealth than we’ve been since the Super Spike of the 1970s.

And although we tend to remember that decade as a dud for investors… commodities investors made fortunes.

That’s when Egypt and Syria triggered the Yom Kippur War. They launched surprise attacks on Israeli forces in the Sinai Peninsula and the Golan Heights.

Oil-exporting Arab nations hit back by choking off U.S. supply… And all hell broke loose.

Over the next six months, the price of oil rocketed 300%. This kicked off an inflationary spiral.

This kicked off a Super Spike. Take a look… 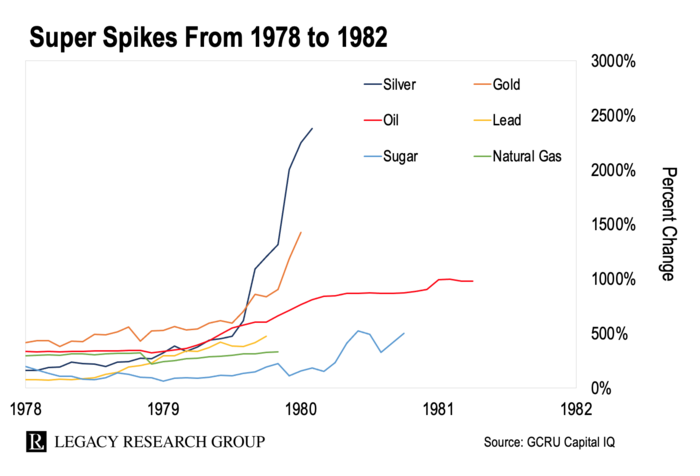 Investors who caught the 1970s Super Spike made some of the most exceptional gains of the last century.

History gives us a blueprint to these Super Spikes. They have three phases…

Right now, we’re still in the Profit Phase. Let me explain with an example…

Last year, I gave my paid-up Strategic Investor subscribers the chance to close out gains of 194%… 284%… and 385% on lithium mining stocks.

I also gave my International Speculator subscribers the opportunity to close out gains of 104%, 241%, and 247% on hard tech mining stocks.

And we continue to see lots of investor enthusiasm around hard tech.

Take what’s happening with the one of the biggest tech companies of our time – Tesla (TSLA).

The hints of a Tesla deal sent shares in Lithium Corporation from 30 cents each to as high as $1.09 in hours. 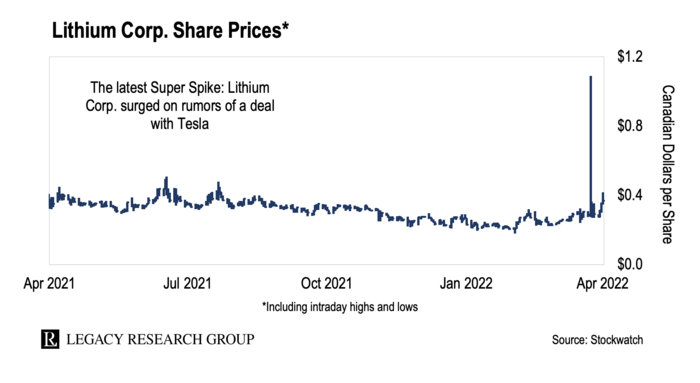 The Tesla deal turned out to be a head fake. But investors’ frenzied reaction to the rumor tells me there’s still enthusiasm – so we’re still in the first phase of the current Super Spike.

They’re not only crucial to the EV megatrend. We also need them to generate renewable energy from wind and solar and feed it onto the grid.

More demand means the spikes will get crazier… the swings will get wilder… and hard-tech mining stocks will enjoy bigger gains.

Whatever Super Spike phase we’re in, there are tiny natural resource stocks set to surge when the time comes.

Inflation is eroding our wealth. Geopolitical turmoil and war are front-page news.

We’ve seen this before. And although it can seem scary… Super Spike investors have made huge profits when these conditions were in play.

During it, we’ll look at the massive profits past Super Spikes have generated… and how you can create even more wealth during the current one – all while shielding your portfolio from this rocky market and the devasting effects of inflation.

This is one of the most important events of my career. So I’ve made sure it’s free for you to attend. Reserve your spot right here.