As I (Chris) showed on Monday, our favorite precious metal just hit an all-time high of $1,976 an ounce.

That’s almost double the tech-heavy Nasdaq… which, as you’ll have heard in the mainstream news, is also having a great year.

But silver has outpaced even those gains. 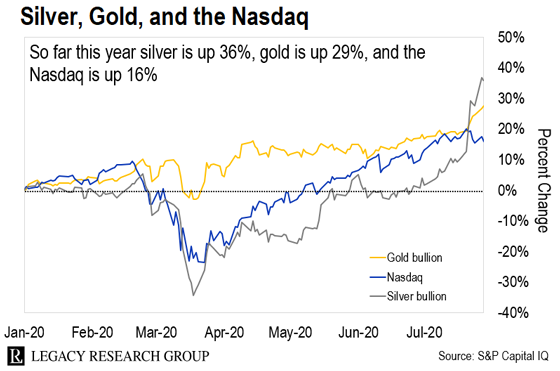 That’s the biggest weekly gain for silver in 40 years.

And as I’ll show you in today’s dispatch, this rally is just heating up.

But before you invest a cent, you need to grasp something hugely important about the silver market.

Silver is one of the most speculative metals on the planet…

Silver is way more volatile than gold. That means it bounces around a lot more in price.

E.B. says a good rule of thumb is to expect silver to move three times as fast as gold in percentage terms – in both directions.

That’s because the silver market is much smaller than the markets for other metals. 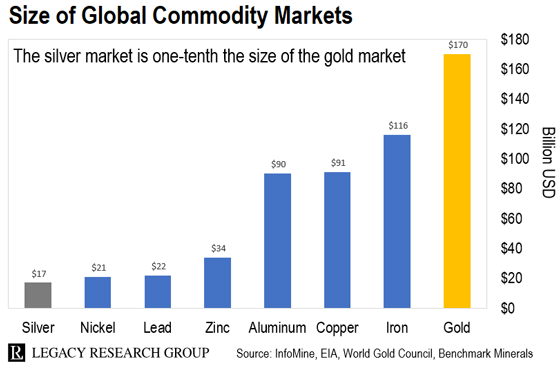 The silver market is roughly one-tenth the size of the gold market. So each new dollar invested in silver has a greater impact on prices. That leaves the metal prone to explosive moves as investors rush in – or out.

It’s why Legacy Research cofounder and legendary speculator Doug Casey says, “Gold is for saving. Silver is for speculation.”

When the public gets manic in a monetary crisis, silver is much more volatile, since it’s a much smaller market. People rush to buy gold and silver, which they think is one thing.

That’s a good reason to be in silver right now, when the markets are weak and it’s cheap.

Silver bottomed for the year on March 18…

That was just 11 trading days before Doug published his recommendation. 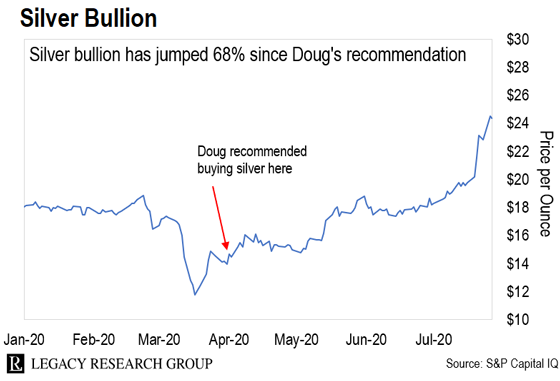 Kudos if you acted on Doug’s advice. No one is going to complain about a 68% gain in a little under four months.

But if history is judge, this is the start of a much bigger move higher.

When silver takes off, it really takes off…

That’s the lesson from this next chart. 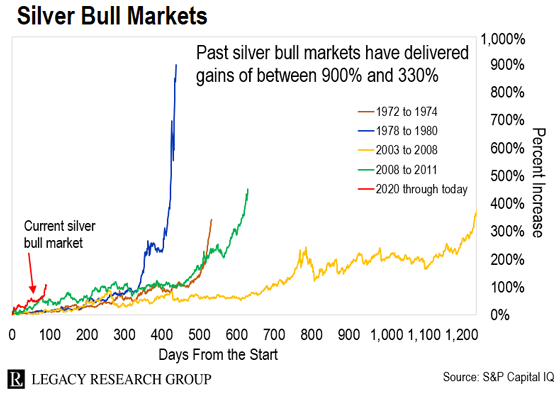 It tracks the four silver bull markets going back to the end of the gold standard money system in 1971 versus where we are now in the current bull market.

In each past bull market, silver has muddled along for a year or more. Then, suddenly, it’s gone near vertical.

That near vertical part of the current cycle is still ahead…

That’s according to colleague Nick Giambruno over at Casey Research.

As regular readers will know, Nick is behind the video that went viral about gold’s return to the center of the world’s money system.

He also put the silver rally on our Crisis Investing readers’ radars in July 2019. It was a deeply contrarian call.

Silver was going through a painful bear market that began in 2013. Nobody was talking about it on CNBC or in The Wall Street Journal. It was cheap, hated, out of fashion… and completely off most folks’ radars.

But here at Legacy, that’s our favorite time to buy. Here’s what Nick told his readers at the time…

As the dollar is debased people will panic into precious metals… just like they did in the 1970s and 1980s, but likely on a much bigger scale today. Much of that money will make its way into the tiny silver market. This will cause the price to spike. It’s a predictable pattern…

The stars are aligned for a silver price spike for the record books. And now is the perfect time to get in. The current bear market in silver has been running for more than eight years. It’s the longest bear market in living memory – and one of the deepest ones. Silver is down by about 70% from its peak in 2011.

Silver is overdue for a bull market. And as silver prices head higher, select silver mining stocks could offer some of the best crisis investing returns in the months and years ahead.

Not according to the gold-to-silver ratio…

If the ratio drops to 10, it means you now need 1/10th of an ounce of gold to buy 1 ounce of silver. (Silver is expensive in gold terms.)

But as Nick explained it to our Crisis Investing readers, there’s an even simpler way to think about it…

When we go to a coffee shop we don’t think of the “cappuccino to U.S. dollar ratio,” but simply the price of a cappuccino (in dollars).

That’s why you shouldn’t think of the gold-silver ratio as a ratio, but rather the price of silver (in terms of gold, which is honest money). It will help you think clearer.

Gold reflects the true price of things better than paper money, which can be manipulated by politicians. In other words, gold is an honest measuring stick. The fiat [government-issued] dollar is like a measuring stick where the definition of an inch is continually shrinking.

So what’s the true price of silver now?

When Nick wrote those lines on June 23, silver cost just 1/125th an ounce of gold. 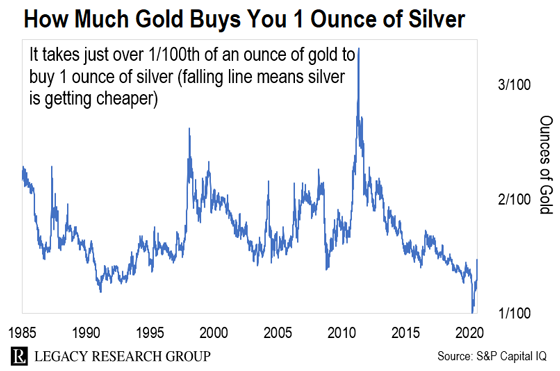 That’s still at the cheaper end of its historical range. We’ll leave Nick with the final word on why that’s a great setup…

Risk is mostly a function of price – when prices are low, there’s less risk, all else equal. And silver is still cheap in gold terms. That doesn’t mean the silver price can’t go lower. But silver’s upside greatly exceeds the downside.

The best way to own silver is in your hand…

Like with gold, common 1-ounce coins are a good starting point. They’re a real, hold-in-your-hand asset.

But it’s not easy to get your hands on silver coins right now. As I showed you in March, there’s a shortage of the gold coins and bars retail investors typically buy. The same thing’s happening with silver.

Due to surging demand, you should expect a delay of between two weeks and a few months on your silver orders, depending on what you buy.

You’ll also have to pay a steep premium to own the physical metal. In some cases… up to $8 over the quoted silver price.

Another option is to buy the Sprott Physical Silver Trust (PSLV)…

Unlike exchange-traded funds (ETFs), this exchange-traded trust holds physical silver in “allocated” accounts on your behalf. That means you legally own specific bars in your name.

This is safer than ETFs that store unallocated metals on your behalf.

With unallocated gold and silver ETFs, there may not be sufficient quantities of the metals backing all of the ownership claims. So in the event of a bankruptcy of the custodian, you could end up being an unsecured creditor.

With the PSLV, you can also take physical delivery of your silver bars in an armored truck. (Although this is subject to a minimum delivery value.)

And like with the Sprott Physical Gold Trust (PHYS), which I’ve also recommended, there may be a tax advantage for U.S. investors.

Physical gold- and silver-backed ETFs are some of the few investments subject to a maximum 28% long-term capital gains tax rate. It’s the rate you’re taxed on gains from assets you hold for more than one year.

Neither PSLV nor PHYS falls under the same classifications as gold- and silver-backed ETFs. Because they’re set up as trusts, your gains are taxed at the lower long-term capital gains rate of 15% (20% for higher-income taxpayers).

At the start of the week, I promised to show you how you can turbocharge your gains on the precious metals rally through shares in the companies that dig them out of the ground.

In the last bull market… top names soared 980%… 1,711%… and 3,510%. And as you’ll see tomorrow, those kinds of gains are on the table again today for investors in the right gold and silver mining stocks.

I’ll also be circling back to silver… and the other fundamental drivers pushing up its price.

Meantime, make sure to check out the three chapters on gold… and one chapter on silver in the free Coronavirus Crisis Playbook we put together for you.

You’ll hear from Doug about why silver is the perfect currency in a monetary crisis… and how to pick best-in-breed precious metals mining stocks.

You’ll also hear from our globetrotting geologist and mining expert, Dave Forest, on how gold stocks can deliver gangbuster profits… even in an overall bear market for stocks.

Here’s that link again to download our free special report.