A gathering of freethinkers… These left-for-dead commodities are coming back… Why the next run for gold stocks will be spectacular… In the mailbag: Are you buying gold?…

I (Chris) have never met so many freethinkers in one place…

Last week, the Legacy Research team… along with more than 300 of your fellow subscribers… gathered at the luxurious Fairmont Southampton hotel in Bermuda.

We were there for the inaugural Legacy Investment Summit.

Going by the feedback we got the from folks who made the trip to be with us, it was a roaring success. I can’t begin to tell you how many kind words we got from attendees.

We had folks there from Japan, India, Vietnam, Australia, New Zealand, Britain, Ireland, Switzerland, Sweden, Russia, Ukraine, and Norway… as well as from all over the U.S. and Canada.

There was even one former NFL player… and an adventurous 26-year-old car stereo engineer from Detroit, who was making his first trip outside the U.S. to meet Palm Beach Confidential editor Teeka Tiwari.

Everyone was from different backgrounds and geographies. But there was a common thread running through all the folks who made it over to Bermuda.

They were all freethinkers.

The kind of people who “like to be outside of their comfort zone,” as one couple put it to me at the opening cocktail reception down on the beach on Wednesday evening.

Later in the week, we’ll be updating you on more of the ideas and insights from the Summit.

Today, we want to fill you in on what we believe will be one of the most profitable calls of the event – a new bull market in commodities.

That was the big call from our resident geologist, Dave Forest.

Dave heads up our elite commodities investing advisory, International Speculator. He’s one of the smartest guys you’ll find in the mining industry.

He’s got more than 20 years of experience in the business. And over that time he’s been an eyewitness to two boom-bust cycles. Now, for nearly two years, he’s been pounding the table on why we’re on the cusp of a new boom in natural resource prices.

And as Dave told the group in Bermuda, his thesis is playing out…

In 2016, you started to see commodities that nobody had cared about since the peak of the last boom in 2010 or 2011 suddenly come back to life.

Iron ore prices went up 96% in 2016. Coal – a commodity everybody thought was dead – doubled in price. And coal mining stocks went crazy. Several of the smaller ones were up more than 700%.

Fertilizer is another sector nobody cares about. You won’t read many headlines in Bloomberg or The Wall Street Journal about what’s happening with fertilizer stocks. But I recommended one of the world’s largest makers of fertilizers, Israel Chemicals (ICL), to my International Speculator readers in January. It’s up 45% since then.

That’s not a normal run-up for a stock the size and maturity of ICL, according to Dave…

ICL is a giant of the fertilizer industry. It’s got a market cap of $8 billion, which puts it on a level with Under Armour and Western Union. When you can get that kind of return on a big, blue-chip stock like that… it tells you that money is pouring into the sector.

But the coming bull market is about much more than these commodities.

At the end of our two-day Summit, Legacy Research managing partner Amber Mason gathered our analysts on stage to grill them on their top picks.

When she asked master trader Jeff Clark what his top speculation for the rest of the year was, he didn’t skip a beat. Jeff said beaten-down gold stocks are going to be a “rocket ship” over the next six months.

Regular readers will be familiar with Jeff’s call on the gold market.

It’s called an “inverse head-and-shoulders” pattern. And it tells Jeff that a reversal of the recent bear market in gold stocks is underway… and a new bull market is on the way. 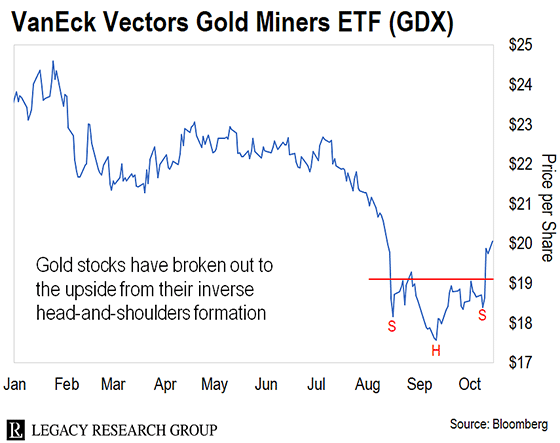 Meanwhile, “dumb money” investors – the mom-and-pop traders who have a consistent track record of selling at market bottoms – have reached record levels of bearishness on gold.

He recommended an options trade for the folks in Bermuda that he reckons will deliver 10x returns over the next six months.

While we can’t share it, we can tell you that he urged ordinary investors to get in on this trend by buying GDX.

By investing on your behalf in 48 of the world’s top gold mining companies, it gives you overall exposure to the global gold mining industry.

It won’t give you the oomph of the options trade Jeff talked about in Bermuda. But it could still be the top-performing investment in your portfolio over the next six months… as gold stocks take a rocket ride.

These were only some of the big ideas at the Summit…

…and why you want to make sure you’ve got a wealth protection plan in place for when the next bear market in stocks strikes.

But tomorrow, we’ll be turning our focus back to another popular topic at last week’s Summit – and the one we’ve spilled the most ink on here at the Daily Cut…

How to reclaim your liberty in an age of digital censors and snoops.

Meantime, it’s all about gold in the mailbag…

On Thursday, we asked you: Do you own gold? Are you adding to your position? Or do you think gold still has a ways to go before we see higher prices?

And we got a ton of great responses. But first, a sharp-eyed reader spotted an error…

Thanks for catching that, Steve. Now, back to gold…

Gold is one of those commodities that requires market timing. Yes, I have gold, but as soon as I can get out at a profit I will. Timing the market is for people who have more time than I do. I’m patiently waiting for the turnaround and then, bye bye.

I think gold and silver are still in time out. I would put my money that 2020 will be the year for the metals. I have been accumulating metals since 1970. Never have I sold one ounce. The ups and downs need to be ignored. Remember, you are doing it for survival just as you do with an insurance policy.

Not quite ready to jump on the gold bandwagon yet. As stocks search for direction, so does the gold price. And with the choppy up and down we have seen, who knows. But my buy finger is definitely hovering over the trigger.

I bought gold and silver back in around 2004 or 2005 when it was around $400 an ounce. I also bought silver dirt cheap. Near the peak I sold enough to get my money back but that was less than one-fourth of what I owned. I have added a little here and there since, but my core purchase is still about triple what I paid for it.

I’ve been buying gold for a few years now. I bought it as a hedge only. I had a friend in college who escaped from Vietnam after the Communist takeover. He told me his family had hoarded some gold over the years and used it to “buy a ticket” out of the country. I hope I never need to use it in that way, but one can never know.

Is this the beginning of the next bull market in gold and gold stocks, as Jeff predicts? Let us know at [email protected].

P.S. For those who couldn’t make it to the Legacy Investment Summit last week, here is your editor talking with award-winning reporter John Stossel… conservative pundit Glenn Beck… and our own Bill Bonner about the assault on liberty.

We’ll have more on this theme for you tomorrow, so stay tuned…