The fight against COVID-19 isn’t over yet…

Over the weekend, the number of confirmed cases of COVID-19 worldwide passed 10 million.

The virus has now killed more than 502,000 people globally.

Nine states… including California, Arizona, and Florida… are reporting spikes in hospitalizations and positive test rates.

And governors in Texas, North Carolina, Louisiana, and Kansas are turning reopening plans into “un-reopening” plans.

That means it’s now more important than ever to play defense in your portfolio… as well as offense.

And as you’ll see today, the perfect “un-reopening trade” is something we talk about all the time here at the Cut – gold.

On the money-making side, standout calls include Teeka recommending bitcoin back in 2016 ahead of a 4,340% run… Nick recommending legal cannabis stocks in 2017 ahead of a roughly 650% run… and Jeff Brown recommending gene-editing company CRISPR Therapeutics before it ran up about 330%.

And we continue to see a bright future ahead for tech stocks… cryptos… pre-IPO deals… and legal cannabis stocks.

These all make for great speculations. But it’s now more important than ever to make sure you also have wealth-protection measures in place.

You see, there are growing signs that stock investors are turning sour on the idea of a smooth reopening of the U.S. economy…

And that spells trouble for the rally on Wall Street.

These are the canary in the coal mine for whether or not the reopening is a success.

For most of the 20th century, it was common for miners to send a canary down coal mines to detect carbon monoxide and other harmful gases.

Canaries act like sentinels. They’re more sensitive to these gases than humans. If the bird became ill or died after flying down the mine, the human miners would evacuate.

And you can think of airline and hotel stocks in a similar way.

If the virus goes away… and enough people start to feel confident again about traveling… airline and hotel shares will rise on surging optimism. (The canary lives.)

If the virus lingers… and the idea of an un-reopening starts to loom large… it could be the end of the rally. (The canary dies.)

And right now, the canary isn’t doing so well… 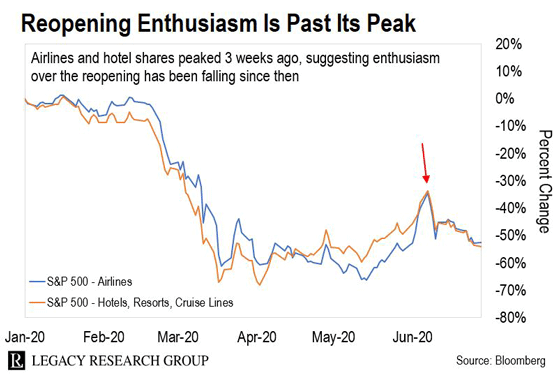 This chart tracks airlines, hotels, and cruise businesses. These are three of the sectors the coronavirus has had the most impact on.

And as you can see – using share prices in these sectors as a proxy – enthusiasm over the reopening peaked three weeks ago.

As regular Daily Cut readers will know, Andy is the guy who bet big against the New Zealand dollar in 1987… and netted $300 million for his employer at the time, Bankers Trust.

That landed Andy on the front page of The Wall Street Journal as a thirtysomething gunslinging trader.

But that wasn’t even Andy’s biggest win.

He later made $1 billion in a single currency trade for a private speculator – off a trade that put $10 billion on the line.

There is only a handful of people alive today who’ve put together trades this big… that have netted dollar gains this size.

And after decades out of the limelight, in February, Andy decided to go public with an urgent warning.

And, boy, was his timing spot-on…

Our February 13 dispatch was all about what Andy saw coming down the tracks. Here’s how I put it at the time…

Andy is convinced there is a major currency move coming soon… and these moves almost always coincide with major shifts in bond, equity, and commodity markets as well.

Andy believes that, if you position yourself right, you could see massive gains from this move. But as he told me last night, he’s worried for folks who don’t see it coming. Because it could mean potentially dire losses.

That was just one week before the U.S. stock market began its fastest plunge into a bear market in history.

And Andy pounced on the opportunity… giving his Andy Krieger’s Big Trades subscribers the chance to make 105%… 114%… even 299% on these moves.

That’s why, when Andy speaks, we listen…

Record infection rates in states which opened up their economy early on – such as Texas and Florida – are removing any doubt about this remarkable little virus which so desperately wants to live. It is contagious almost beyond belief.

COVID-19 is also going to slow the economic recovery and create a series of new problems for the authorities to manage. Many people are going to stay home, so consumption won’t recover as fast as hoped.

If the current record infection rates result in a new surge in deaths, I don’t believe that the market can hold up for long… unless the Fed goes completely mad and starts buying shares.

As crazy as it sounds… we wouldn’t rule out the Federal Reserve buying stocks directly.

It’s something Legacy cofounder Bill Bonner has been warning about…

As he and colleague Dan Denning have been showing their Bonner-Denning Letter readers, the Fed is already buying shares in corporate bond exchange-traded funds (ETFs) to prop up the bond market.

So, there’s nothing to stop it from buying stocks.

The Fed could wade into the U.S. stock market and become the buyer of last resort.

But that’s not a bet you want to make with your nest egg.

That’s why we’ve been so vocal about gold…

Gold and gold stocks have done what they’re supposed to do in a crisis – protect your wealth. 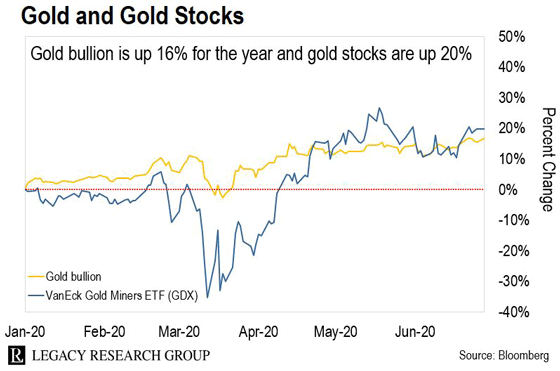 And if the un-reopening trade gathers momentum, they’ll do even better.

Remember, gold is “disaster insurance.” You don’t own it instead of stocks. You own it because it tends to go up when crises strike.

And that’s a beautiful thing if you’re taking a hit on the stocks in your portfolio.

Gold is also a way to protect your wealth from central bank money printing. And Andy says it’s hard now to see any other outcome…

I believe it is reasonable to assume that for some time, future growth rates, trade numbers, and many other things will be equally hard to predict.

About the only thing that everyone can feel comfortable forecasting is that the Federal Reserve will continue to keep its printing presses cranking out its funny money at record speed.

For more on how to build the ideal gold portfolio, make sure to check out the issue of our Legacy Inner Circle advisory that I’ve unlocked for you.

You’ll learn how much to put to work in physical gold versus gold stocks. You’ll also learn about the different kinds of gold stocks… from junior miners… to majors… to gold royalty stocks.

I consider it a masterclass on gold investing. So please set aside the time to read it so you can see how it squares up with your own gold portfolio.