We called it… Did you buy it?

In my April 20, 2020, dispatch, I (Chris Lowe) showed you how the crowd had gotten the legal cannabis sector dead wrong.

This was at the start of the stay-at-home orders state governments put in place to curb the spread of the coronavirus.

Our regular stand-in for the legal cannabis market, the Horizons Marijuana Life Sciences Index ETF (HMLSF), was down 26% for the year.

That’s a big plunge. A 20% fall from a peak is the common definition of a bear market.

Investor sentiment was in the ditch… and the mainstream media was full of scary headlines about a sector-wide wipeout.

But as I put on your radar at the time, legal cannabis companies weren’t just surviving the COVID-19 lockdowns. They were thriving.

During March 2020, for instance, California saw a 54% jump in cannabis sales compared to the same time a year earlier…

And Michigan saw a 25% jump in sales for March 2020 following the governor’s stay-at-home order. As I wrote at the time…

[C]annabis sales are spiking… right as cannabis company share prices are falling. And that makes it a perfect time to buy in.

If you’re a longtime reader, I hope you acted on my recommendation to buy shares in HMLSF. 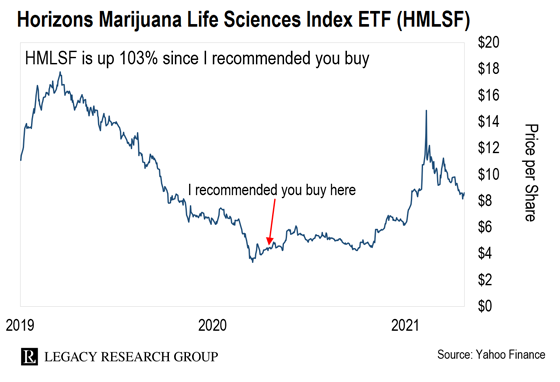 But don’t worry if you brushed off my advice this time last year… or if you’re new to the Cut. As you’ll see today, with more legislative wins… and sales continuing to smash records… legal cannabis is still one of the best speculative opportunities for your radar right now.

The drama over the results of the presidential race last November drowned out the big news on cannabis.

But six cannabis legalization initiatives were on the ballots in five states on Election Day – Arizona, Mississippi, Montana, New Jersey, and South Dakota.

You’ll notice these are “red” as well as “blue” states. Mississippi is one of the most conservative states in the country. But voters passed all six initiatives in a clean sweep. (South Dakota was the first state to legalize medicinal and recreational cannabis on the same day.)

And already this year, New York, Virginia, and New Mexico made cannabis fully legal. This brings the number of states where cannabis is fully legal to 17, along with Washington, D.C. As a result, government prohibition of cannabis is now effectively over for about one-third of Americans.

The legalization wave hasn’t crested yet…

More states will follow suit. That’s going by a set of polls over the past three months in states where cannabis is still illegal for recreational use.

This table from the poll watchers at FiveThirtyEight reveals how voters in nine of these states view cannabis legalization.

In all nine states, voters support it. This is often by wide… even overwhelming… margins. 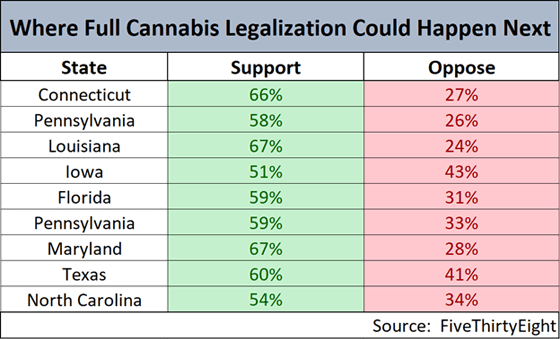 In Connecticut, Louisiana, and Maryland, for instance, it’s more than 2 to 1 in favor of legalization.

Federal legalization is getting closer, too…

It won the support of about half of House Republicans and almost all House Democrats.

If it passes in the Senate, it will solve one of the industry’s biggest challenges.

There have been some workarounds. But this has forced many legal cannabis companies to do business in cash. Instead of storing their earnings in the bank, they use costly armored trucks to deliver wads of cash to secure storage facilities they rent or buy.

The SAFE Banking Act would allow federally regulated banks to do business with legal cannabis companies for the first time.

Legal cannabis has powerful supporters in the Senate, too…

We’ve just run a decade-long experiment of legalization of recreational use at the state level. Schumer says this shows that the worst fears of Washington’s War on Drugs crusaders were misplaced. As he told a reporter at Politico…

The legalization of states worked out remarkably well. They were a great success. The parade of horribles never came about, and people got more freedom.

The most recent Gallup poll showed that more than two-thirds of Americans – 68% – support fully legal cannabis. That includes nearly half of registered Republicans.

It’s just a matter of time before lawmakers lift the 50-year prohibition on the plant.

Even without federal legalization, cannabis sales are soaring…

It’s something colleague William Mikula has been tracking closely.

If you don’t already know him, he’s Teeka Tiwari’s chief analyst at our Palm Beach Venture advisory. And he’s one of the Legacy Research team’s top experts on the legal cannabis industry.

At Palm Beach Venture, Teeka and William help their readers profit from the early stages of undeniable market megatrends.

And Teeka and William have been focused on the legal cannabis industry as a primary source of early, or “venture-stage,” profits. Here’s William with more…

We launched Palm Beach Venture in the summer of 2019. Cannabis was the first major trend we pinpointed. We believed it was perfectly poised to deliver outsized returns.

Don’t get me wrong. Like we’ve seen in crypto, there have been bone-crunching drops along the way. But over the past 12 months the trend has been up.

What Teeka and I love about legal cannabis is its potential to grow at a rapid pace. What most people don’t know is sales have never stopped climbing since the initial stages of the cannabis legalization wave in 2012.

Colorado reported over $2 billion in sales for 2020. That was amid sweeping COVID-19 lockdowns and a 52% fall in tourism spending.

Last month, Illinois set a new monthly sales record of $109 million. The state is entering only its second year of legalization. And it’s already threatening to top high-revenue states such as Washington, where cannabis has been legal since 2012, and Oregon, where it’s been legal since 2015.

I know there’s still some pessimism over legal cannabis after the bear market from March 2019 to March 2020. Investor sentiment is still banged up pretty bad. But the signs continue to point to an indisputable megatrend forming in cannabis. You just have to fade out the short-term volatility and stay focused on the long-term prize of widespread legalization.

What should you do now?

Last year, cannabis sales shot up 46% over the previous year to $17.5 billion.

And market research firm Grand View Research forecasts the market will be worth $84 billion by 2028.

That’s more than four times what it’s worth today. That will result in a rising share price for the Horizons Marijuana Life Sciences Index ETF (HMLSF), which I mentioned up top.

It holds a basket of the world’s top cannabis companies.

Not all of these are pure plays on the growth of the U.S. market. But this exchange-traded fund is a simple way to get broad exposure to the legal cannabis megatrend.

One last thing before you go…

I know a lot of folks are on the fence about investing in cannabis. That’s because they associate cannabis with hippies or “stoners.”

Maybe you’re one of the doubters.

I get it… We’ve been exposed to decades of government propaganda suggesting cannabis is only for dropouts and deadbeats.

But remember that cannabis has revolutionary potential as a medicine, too.

For more on that, make sure to catch up on the dispatch I wrote from a medical cannabis conference in Madrid, Spain, in February 2020.

You’ll read the story of Carola Pérez, one of the speakers there.

When Carola was 10 years old, she broke her tailbone. The nerve pain from the injury left her in long-term debilitating pain. For most of her life, she spent about 15 hours a day in agony lying on her back on the floor. Even the tiniest move sent stabbing jolts of pain through her body.

That is… until she discovered the painkilling properties of cannabis…