Last week, the Nasdaq dropped 3.8%. That was the tech-heavy index’s seventh straight week of declines.

Tech stock investors haven’t had a losing streak this long since 2001 after the dot-com bubble burst.

And tech isn’t the only sector feeling the pain.

The S&P 500 tracks the 500 largest U.S. stocks by market value. On Friday, it briefly dipped into bear market territory (technically, a 20% or more fall from a peak) before rallying at the end of the day.

In short, it’s ugly out there.

If you’re like thousands of Daily Cut readers… and you started investing during the pandemic… this is your first major pullback.

Even if you’re a more seasoned investor, it’s still the worst plunge since the 2008 global financial crisis.

So this week, I’ll continue to spotlight the moves you can make now to protect and grow your wealth.

Most mainstream investors don’t know it… but the best time to invest is when nobody else wants to.

Before we get to that, you need to understand something important about bear markets.

Not all bear markets are the same…

As colleague Teeka Tiwari has been writing about, there are two different types of bear markets.

“Secular” bear markets are long-term downtrends. They generally last between 12 and 20 years.

“Cyclical” bear markets are shorter-term downtrends within secular bull markets. They generally last between 6 and 18 months. Then the longer-term bull trend takes over again.

Bull markets are the same – either secular or cyclical.

But each of those was a cyclical – or short-term – bear market within a larger, long-term bull market. So they weren’t times to sell out of stocks and move to cash.

You can see how it played out in this chart… 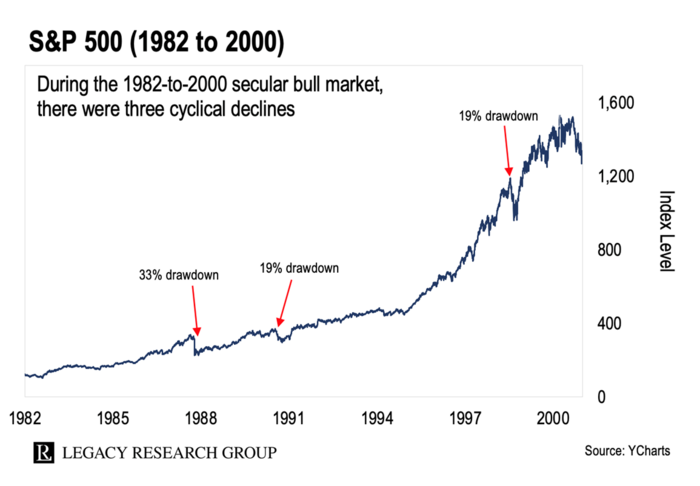 But to earn that return, you had to stay the course through three major cyclical bear declines.

Those 19% drops didn’t quite make the official definition of a bear market. But they’re close enough to count.

Counting the current drawdown, we’ve already had three cyclical bear or near-bear markets within that longer-term uptrend. You can see this in the chart below. 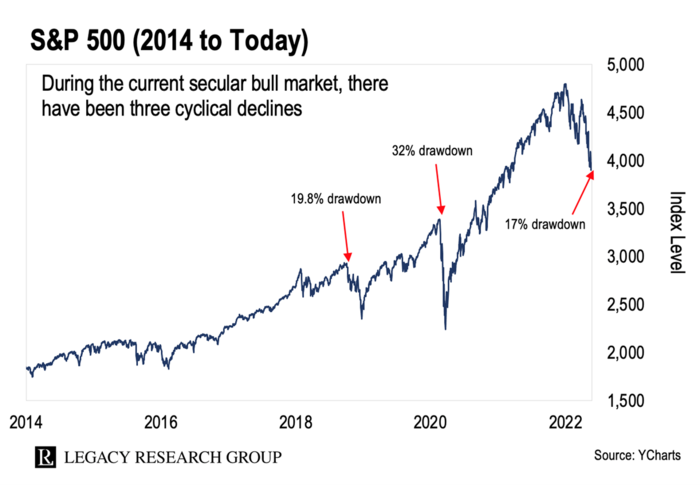 The first was at the end of 2018. That’s the last time the Fed began raising interest rates. And the S&P 500 dropped 19.8% before reaching new highs.

Then we got the pandemic-induced cyclical bear market. It raged between February and March 2020. Over that time, the S&P 500 plunged 32% before reaching new highs.

Both times, folks who panicked over the short term lost out on long-term gains.

Teeka says the same thing is true today. Folks who resist the temptation to panic sell… and hold on to their stocks… are poised for gains when the bullish trend resumes.

Why does Teeka think we’re in a secular bull market today?

It’s largely down to something called the M/Y ratio.

When there are more middle-aged people than young adults in the population, Teeka calls it the Golden Ratio. 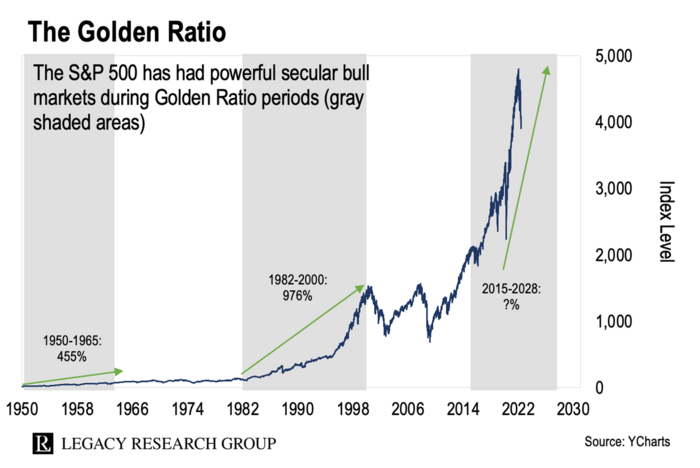 Now we’re back in a Golden Ratio period. And demographic trends show it’s set to last until at least 2028.

Folks in their late 30s and 40s generally have higher salaries than younger folks. So they tend to have more discretionary income.

These folks also often have young families. So they need to spend more on average than young adults.

And middle-aged people are typically saving for their retirements and investing more in the stock market than young adults are.

Few analysts keep a close eye on the Golden Ratio like I do. You have to study academic papers to find in-depth research on it.

When the Golden Ratio is in play, the economy tends to grow faster, corporations profit more, and the stock market rises faster. This was true in the last secular bull market. And this Golden Ratio period is set to last until 2028.

Folks in the mainstream are panicking about the recent sell-offs. I’m not as concerned. These demographic trends point to stock prices going up. The Golden Ratio says this bull market has another six years to run.

Teeka has a simple playbook for cyclical bear markets…

It involves doing the opposite of what most mainstream investors are doing. Teeka again…

I know this market sell-off is painful. But if you want to emerge from this bear market richer, you have to view it as a gift.

It may seem counterintuitive when there’s a sea of red everywhere. But you must treat it as a fire sale.

The key is to pick investments backed by powerful megatrends that can make it through this cyclical bear market.

As I mentioned up top, the best time to invest is when nobody wants to. And we’re in one of those times right now.

But if you understand that we’re in a cyclical bear market, not a secular one, you know there’s no reason to panic. Instead, you can focus on picking up quality investments at low prices.

And our analysts have been working hard to identify the best of these opportunities.

More on that later this week.