Investors are losing their minds over Fed rate hikes…

For more than a decade, America’s central bank has had an ultra-cheap interest rate policy.

It’s also puffed up its balance sheet from $3 trillion to $9 trillion. That’s roughly $6 trillion of stimulus.

This has helped fuel one of the best stock market runs in history.

But last November, minutes from one of the Fed’s rate-setting meetings dropped a bomb on markets.

They revealed that, for the first time since the pandemic began, the Fed was considering reducing stimulus to combat rising inflation.

And stocks started to dive. 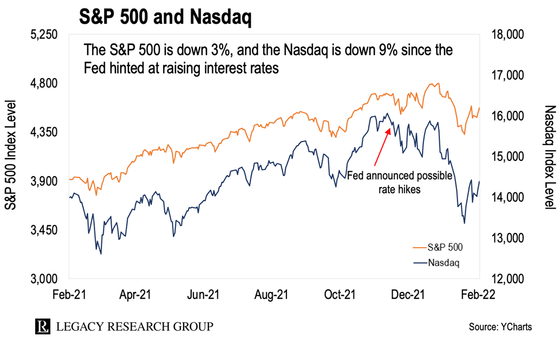 Now, mainstream investors are freaking out. They think rate hikes could trigger a bear market… even a crash. And the talking heads on TV are echoing these fears.

But is it really time to panic?

Not according to the newest member of the Legacy Research team, Nomi Prins.

As you’ll see today, she doesn’t expect the Fed to follow through on its tough talk about raising rates.

But first, an introduction…

Before joining Legacy, Nomi worked in the upper echelons of the financial world…

But after the 9/11 attacks, she quit her seven-figure job at Goldman. And she started blowing the whistle on how the Fed coddles Wall Street… and colludes with other central banks worldwide to distort markets.

Her latest is Collusion: How Central Bankers Rigged the World. It’s an exposé of how central bankers overstepped their mandates in the wake of the 2008 crash… and began directing the flow of epic sums of stimulus without any checks or balances.

That’s why we brought Nomi on board. She’s here to guide you through the massive economic and financial distortions this stimulus has created.

And Nomi’s take on what’s happening with the Fed right now is different from the one you’ll hear from the mainstream press.

It must control inflation. And it must help the country reach max employment.

But it also has a third, unofficial mandate: keep stock prices rising. Over to Nomi…

The Fed claims to care about the economy above all. It operates under a so-called dual mandate that became law in 1977. But at the end of the day, it also follows a third mandate to be a market watcher and rescuer.

But it’s really because the Fed cares most about its shareholders – the big banks. Nomi again…

The Fed isn’t a government institution, like most people think. It’s a quasi-corporation. A members-only club. Twelve different reserve banks make up the Federal Reserve System. These banks span districts across the country. They’re the ones who own the Fed.

Sure, the White House chooses the Fed’s board of governors. And Congress confirms those choices. But the federal government doesn’t own stock in the 12 reserve banks. Member banks such as JPMorgan Chase (JPM), Citigroup (C), and Bank of America (BAC) do.

Its official job is looking after the economy.

Its unofficial job is propping up the stock market and keeping the big banks happy.

When push comes to shove, Nomi says the banks prefer inflation over the end of cheap money…

Jamie Dimon – the CEO of my former employer, JPMorgan Chase – predicted the Fed would raise rates six or seven times this year. But I believe it will be three, tops.

And Nomi says this is an opportunity for you to profit…

We know from all the recent volatility that the prospect of aggressive Fed rate hikes spooks the market.

And the fearmongers in the mainstream press make that worse.

For example, The Wall Street Journal recently ran the headline “The Federal Reserve Is About to End America’s Era of Easy Money.”

But as Nomi has been showing her readers… that couldn’t be further from the truth.

And even if the Fed does what investors fear it will… and raises rates by 2% over the next two years… that doesn’t mean easy money will vanish.

With inflation running at 7%… and borrowing costs at 2%… you can still get free money.

Raging inflation will wipe out any interest income you have to pay.