Skin and hair are still flying over Election 2020…

In the latest twist, President Trump has fired the director of the Department of Homeland Security’s cybersecurity agency, Christopher Krebs.

Krebs is one of the country’s top election-security officials.

And last Thursday, his agency announced that there was “no evidence that any voting system deleted or lost votes, changed votes, or was in any way compromised.”

Trump fired back on Twitter that he continued to believe there was election fraud. And yesterday, the president announced that Krebs had been “terminated.”

This makes for great entertainment. It’s addictive stuff. And it’s what hundreds of millions – even billions – of people are tuning in to every day.

If you like the drama, that’s fine… But it’s not going to help you make money in the markets.

So today, I (Chris Lowe) am urging you to tune out the partisan mudslinging in Washington… and focus instead on the stories that matter for your wealth.

The Election Day result that matters most for us as investors is that legal cannabis is here to stay.

Six cannabis legalization initiatives were on the ballots in five states – Arizona, Mississippi, Montana, New Jersey, and South Dakota. (South Dakota was the first state to legalize medicinal and recreational cannabis on the same day.)

Voters passed all six initiatives in a clean sweep. And not a single ballot has been challenged… and there are no claims of fraud over the results.

You’ll notice that the list of states that passed legalization initiatives contains “blue” as well as “red” states.

In other words, Election Day was an overwhelming landslide for the legal cannabis industry. And both sides of the aisle celebrated it.

The chart below is of the Horizons Marijuana Life Sciences ETF (HMLSF).

It’s an exchange-traded fund (ETF) that tracks the returns of the 29 largest cannabis stocks. So it’s a good a stand-in for the legal cannabis sector. 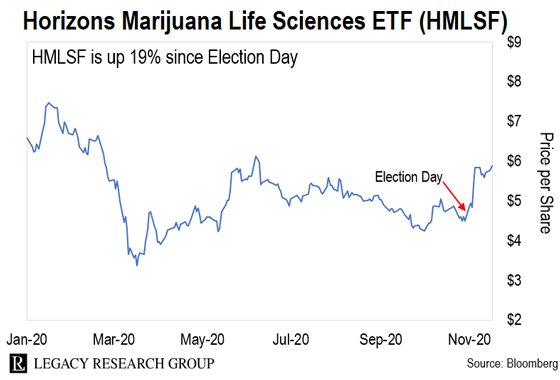 HMLSF has been trending up since the low for the year it hit on March 18. And since Election Day, it’s up 19%.

This marks the start of a new bull run for cannabis.

At our Crisis Investing advisory, he’s been calling for a bull market in cannabis since June 2017.

A month later, he added Innovative Industrial Properties (IIPR) to the model portfolio. It finances and leases grow facilities to cannabis companies operating in the U.S.

It’s now up 856% – the highest gain of the more than 290 open stock recommendations across the model portfolios of all 18 investment advisories we publish at Legacy Research.

But it hasn’t been a straight shot higher for cannabis stocks. Many of them – including ones Nick has recommended – have taken it on the chin over the past two years.

As you can see, that’s when the cannabis sector endured a brutal bear market. 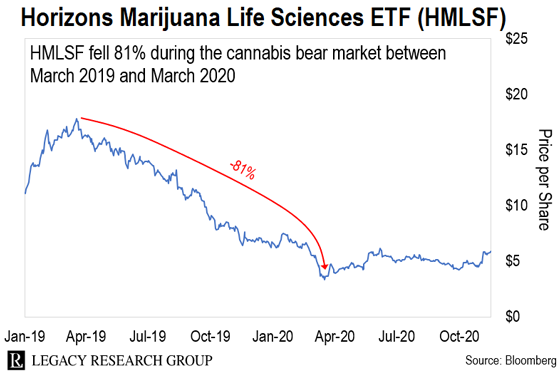 The last time we saw such a bloodbath in a hot new sector was during the dot-com crash at the turn of the millennium.

But Nick believes the “green wave” election means the bear market is now in the rearview mirror. And it’s time to buy again…

In every state where a legal cannabis question was on the ballot, those laws passed. There’s a tipping point here. A lot of these states were conservative, red states.

New Jersey was the most significant state to legalize cannabis. For recreational use. This will set off a domino effect on the densely populated East Coast. New York, Connecticut, and Pennsylvania will follow suit. I think this will force Washington to act.

Here’s how I think federal legalization will look. Recreational cannabis will be decided on a state-by-state basis. And the feds won’t interfere with whatever those states decide. But the federal government will flat-out legalize medical cannabis.

That means another 14 states joining the 36 that have already made cannabis legal for medical use. That’s another roughly 94 million Americans who’ll have access to cannabis health products.

Most folks know “Big T” as the crypto guy.

And whether it’s in public or private markets, legal cannabis is one of the sectors he’s most bullish on right now

These recent ballot wins will open up over $2 billion in new opportunities and 21 million people to legal cannabis. This is on top of the already stunning growth the cannabis market has enjoyed since Colorado and Washington state legalized adult use in 2012.

And remember – each new state serves as a legalization domino for the surrounding states. It’s easy to cross state lines in the U.S. Legalities aside, this makes it easy for folks in states where cannabis is still illegal to buy in a neighboring state where it’s legal.

This forces the hands of state governments to approve legalization measures – or else miss out on tens of millions of dollars in tax revenue. Revenue that is all the more important now thanks to COVID-19-induced budget shortfalls.

The three largest cannabis companies – Curaleaf (CURLF), Green Thumb (GTBIF), and Cresco Labs (CRLBF) – are coming off their best quarterly earnings ever. They averaged sales of $164 million in the July-to-September quarter. That’s over 215% higher than in the same quarter last year.

It’s time to cash in on the green wave…

At Palm Beach Venture, that’s exactly what Teeka and William’s readers have had the chance to do.

The private shares Teeka and William put on their radars in 2019 went public yesterday. Shortly after they listed, the shares rose as high as 300% from the entry price available when Teeka and William made their recommendation.

William told me in a call earlier today that if those shares hit he and Teeka’s target price, it’ll mean a gain of nearly 4,000%.

And they’re not stopping there.

Before the pandemic, Teeka and William crisscrossed the globe hunting for early-stage opportunities in the legal cannabis industry…

They’ve cut down on their travel since then. But they’ve continued to work their network of insiders for new opportunities. And they now have three pre-IPO cannabis names on their radar that they believe will deliver returns of up to 11,222%.

To learn more about the opportunities Teeka and William have unearthed in the private markets… follow this link.

As I mentioned up top, it’s shot up 19% since Election Day. And Nick, Teeka, and William all see more gains on the way.

Cannabis stocks, as we’ve seen, can offer explosive gains. They’re also highly volatile. So as with any other speculation, never bet the farm. And prepare for sharp ups and downs along the way.