If today’s stock market confuses you, you’re not alone…

Last week, we got a trifecta of what looked like bearish news.

…we got news that the U.S. just went through two quarters of negative GDP growth – a common definition of a recession.

…and an inflation gauge the Fed closely watches leapt to its highest 12-month gain in more than 40 years.

But stocks didn’t head lower as you’d expect. Instead, they rallied.

That brings its gains for July to nearly 8%.

Which leads us to the question for today’s dispatch: Is the bear market over?

First, a closer look at that bearish trifecta…

When the Fed raises interest rates, it increases the yield on Treasury bonds.

This raises the “discount rate.” It’s the yield you could earn on the 10-year Treasury note if you don’t tie up your money in stocks.

When folks get laid off, they spend less. People with jobs tend to spend less, too, because those jobs become less secure. Less consumer spending pressures companies’ revenues.

And inflation doesn’t bode well for stocks either.

On Friday, news broke that the personal consumption expenditures (PCE) index – the Fed’s main inflation gauge – rose 6.8% in the 12 months ending in June.

That was the steepest 12-month jump since January 1982.

As super-investor Warren Buffett pointed out in a shareholder letter in 1981, this pushes up companies’ costs and squeezes margins…

Inflation acts as a gigantic corporate tapeworm. That tapeworm preemptively consumes its requisite daily diet of investment dollars regardless of the health of the host organism. Regardless of a company’s profits, it has to spend more on receivables, inventory, and fixed assets to simply equal the unit volume of the previous year.

Despite these three headwinds – rising rates, a recession, and high inflation – stocks have been ripping higher.

Small caps and tech stocks have been leading the surge…

These are more speculative than the larger S&P 500 stocks. That makes them a great early sign of investor sentiment.

And they’re now up even higher from their lows than the S&P 500 is.

You can see that in the chart below. It tracks the performance of the Russell 2000 index of small-cap stocks and the Nasdaq-100 tech index. 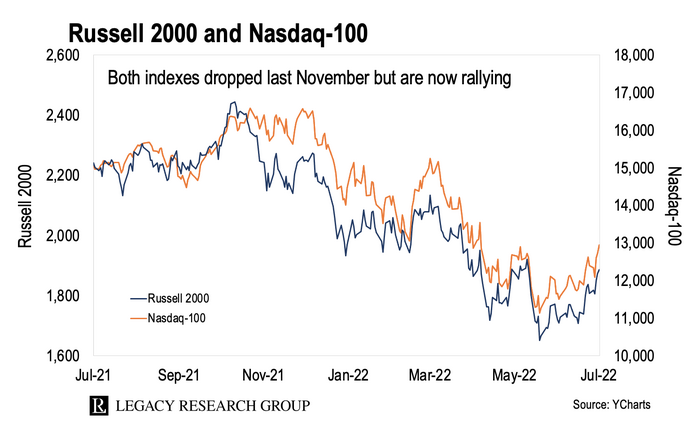 Cryptos such as bitcoin (BTC) and Ethereum (ETH) are speculative investments too.

Like small caps and tech stocks, they fall faster and further in a bear market than the typical S&P 500 stock. But they’re also the first to turn around when a bear market has run its course. 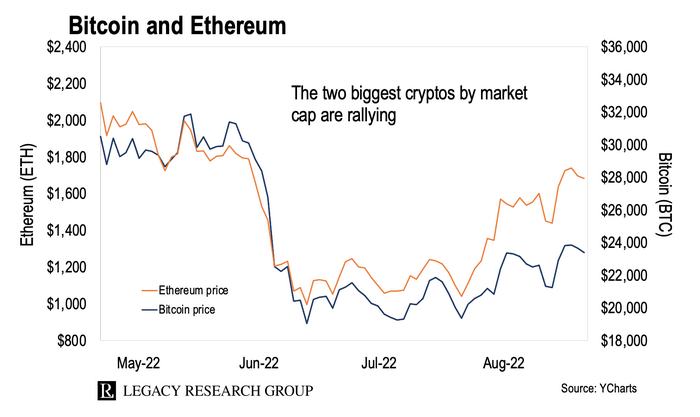 That’s another sign that speculators are coming back into the market.

Could this be the end of the bear market?

But it’s also possible investors have already priced in these three headwinds… and the worst of the bear market is behind us.

If so, it’s good news for readers who took our advice and stayed the course. We may be about to have a turnaround that few in the mainstream see coming.

Either way, our advice remains the same…

Stay the course with the stocks you already own. Unless something you don’t like has changed about the underlying business, there’s no reason to sell.

As colleague Teeka Tiwari has been reminding his readers, volatility is a feature, not a bug, of the stock market.

It’s the price you pay for a shot at life-changing wealth.

Don’t get me wrong. Bear markets are painful. I’ve seen my own portfolio tumble and my net worth plunge.

But as I showed you here, years following bear markets tend to deliver above-average returns. They’re the reward waiting for you on the other side.

Don’t confuse current volatility with a permanent erosion of capital. Enjoy your life, enjoy your children, enjoy your grandchildren. The stocks and cryptos you own will do their own thing daily. There’s nothing you can do about it.

Sitting in front of the screen and praying won’t move you toward your goal of financial freedom in any way. Getting in on great investments… and sticking with them for the long term… will.