That’s how we feel every time we check our brokerage accounts these days.

And the tech-heavy Nasdaq has plummeted almost 30% from its all-time high last November.

The last eight times the S&P 500 ended a calendar year in the red, bonds finished the year up.

This has softened the blow of past bear markets.

But this year, stocks and bonds are down more than 10%.

And it’s led to an 18% drop in the classic 60/40 portfolio. That’s the asset allocation model most mainstream advisors follow. It splits your wealth between stocks and bonds – which is supposed to protect against these kinds of falls.

So I hope you pay special attention to today’s dispatch.

Colleague and former hedge fund manager Teeka Tiwari just put out an alternative model. It’s based on what ultra-high-net-worth individuals in his network have been doing with their wealth.

And it’s perfectly suited to help you grow your wealth as inflation rages. That’s especially important since we just got news that annual inflation rose to 9.1% in June.

If you just opened this e-letter for the first time, congratulations. It means you recently subscribed to one of the 21 investment advisories we publish at Legacy Research.

The Daily Cut is the premium big-ideas newsletter we created for you and our other paid-up subscribers.

Our mission is to help you survive and thrive in today’s chaotic world by keeping you up to date with the latest from Teeka, Jeff, Nomi, and the rest of the team.

Most folks seek insights from traditional media outlets such as CNBC and The Wall Street Journal… or on Twitter, Facebook, and other Big Tech social media platforms.

But that’s a mistake.

These mainstream outlets aren’t in the business of helping you become wealthy. They’re advertising platforms.

And good luck making sense of the world through the lens of Twitter.

Legacy is a subscription-based publisher. Our only loyalty is to you – our reader.

If our analysis is insightful and profitable, you’ll continue to subscribe. If not… you’ll move on.

It’s a business model we’re proud of… because it’s win-win. For us to be successful, we first have to help you succeed.

And the most important place to start is asset allocation.

I believe the most vital part of building wealth is how your investments fit together into one holistic portfolio.

And several studies back it up.

One of the more famous ones is by economists Robert Ibbotson and Paul Kaplan.

They looked at 10 years of monthly returns for 94 mutual funds and five years of quarterly returns for 58 pension funds. And they found that asset allocation explained about 90% of the variability of these funds’ returns over time.

You’ve heard athletes use the phrase “no pain, no gain.” It’s the same for investing…

Without risking some of your wealth… you can’t hope to earn a return.

If you’re a younger investor, you’ll have a higher risk tolerance because you have time to recover any losses.

So you’ll likely own a higher proportion of riskier investments, which give you the chance of higher returns.

If you’re closing in on retirement, you don’t have as much time to regain losses. So you’ll skew your portfolio toward steadier, less speculative investments such as bonds and blue-chip stocks.

But regardless of how you put your portfolio together, you need to make sure it can weather downturns.

The idea is you invest 60% of your wealth in stocks, which tend to do well during good times. You also invest 40% in more defensive bonds.

Bonds give you more modest returns than stocks. But because the income payments you earn on a bond are guaranteed as long as the issuer doesn’t go bust, they’re also less volatile.

So investors have turned to bonds as safe havens when times are tough.

The problem is bonds tend to do badly when inflation is high. That’s because, over time, it eats away at the value of the income they pay out.

As you can see from the table below, bonds are down with stocks this year as a result.

That’s going by the Bloomberg U.S. Aggregate Bond Index. It’s a common stand-in for the performance of the U.S. bond market. 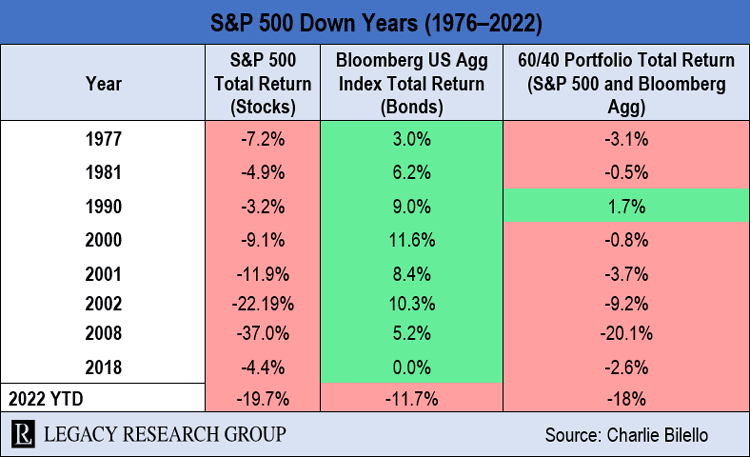 And as long as inflation is a problem, bonds won’t do well.

That means the 60/40 split is broken. It just doesn’t work when inflation is this high.

He’s one of the best-connected investment experts in the world today. And he doesn’t stop putting his connections to use for his readers.

I’ve seen him after he’s flown overnight from Moscow to Fort Lauderdale, arriving at our Delray Beach headquarters bleary-eyed to brief staff on his latest research.

The next day, he’d catch a red-eye to California to research an investment opportunity. Then, he’d be off to the Colombian highland jungles with an armed escort in search of more life-changing gains.

And last week, he rolled out a new asset allocation model at our flagship Palm Beach Letter advisory.

It’s based on his conversations with ultra-high-net-worth folks… and what they’re doing with their portfolios.

And he says it’s the biggest change he’s made to the core investment strategy at Palm Beach Research Group since he first recommended bitcoin there in 2016.

I’ll have more specifics for you in tomorrow’s dispatch. So make sure to look out for that.

You don’t want to miss it…

Teeka took over at The Palm Beach Letter in 2016. Since then, the average annual gain in the model portfolio is 147.8% – even with this current market pullback.

Teeka says that more than 10x outperformance is down to one thing above all else – the right asset allocation plan.

And as you’ll see tomorrow, by following his new model, you’ll no longer have that sinking feeling when you open your portfolio. Instead, you’ll know you’re well protected and set to profit.