So says colleague Teeka Tiwari in a new recommendation to his readers over at Palm Beach Research Group.

Teeka got his start in finance over three decades ago, when he worked at Wall Street investment bank Shearson Lehman. At just 19 years of age, he became the youngest-ever vice president there.

He then ran his own hedge fund… before joining the newsletter publishing business to help regular folks beat the market.

Nearly all that time, he’s been a fan of gold as wealth protection.

But as I (Chris Lowe) put on your radar on Monday, gold has been falling since its peak last July. 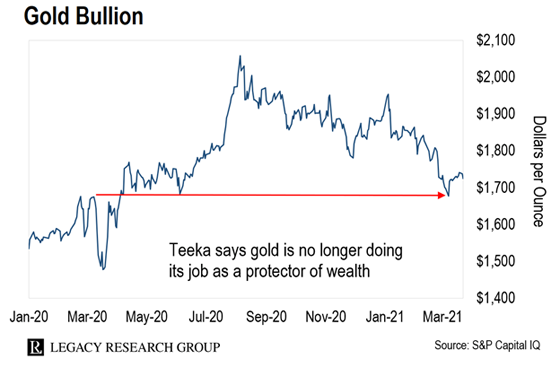 After a marginal rise last year, it fell back to where it was in March 2020, when the COVID-19 pandemic hit the United States. It’s since ticked up a bit to where it was last June.

That’s odd, given what’s going on at a macro level. As Teeka put it…

Even though the U.S. spent more than $5.3 trillion on coronavirus relief in the last year… and our stimulus spending (more than we’ve seen from any other country on the planet) is worth a staggering 27% of our annual GDP… gold hasn’t done a thing.

As a result, he’s come out with a bold new call. He says gold is losing ground as a store of wealth. And he’s urging readers to replace some of their gold with bitcoin.

This is seismic. Especially if you’re a long-term gold owner.

So in today’s dispatch, I’ll unpack Teeka’s big call for you. As you’ll see, it involves radically rewriting your portfolio.

The common thread running through everything we publish is it’s independent, non-mainstream thinking about how to grow and preserve wealth.

But our analysts all have their own views… their own strategies… and their own ideas about how to do that.

Legacy is a marketplace for ideas. Some you’ll like. Others you’ll reject. At times, they’ll even be controversial. But our hope is you’ll find them all thought-provoking.

And if you find yourself having an allergic reaction to a new investment idea… that’s usually a good thing.

It means it’s yet to find its way into the mainstream. And pre-mainstream is where the real magic happens…

With that in mind, let’s dive into what’s happening with gold and bitcoin.

It sure is strange to see gold falling right now…

I wrote a full dispatch about this on Monday.

With so many concerns over the size of the stimulus Washington and the Fed are pumping out, you’d expect gold to rally.

There’s only so much gold on Planet Earth. And it’s expensive to produce more of. You need diggers, dozers, workers, and permits… and you often have to mine in politically unstable countries.

Gold’s scarcity makes it inflation-proof. That should make it a go-to choice for folks worried about U.S. dollar inflation.

But the chart above shows investors don’t care.

This chart says it all… 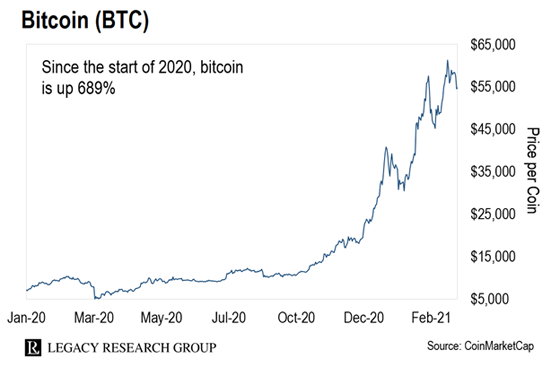 Bitcoin does the same thing as gold… protecting investors against inflation… only digitally.

There’s a finite supply – a hard cap of 21 million bitcoins.

And it’s expensive for “miners” to create new bitcoins. The computer hardware and energy costs involved in keeping the bitcoin network secure are enormous.

To give you an idea, the energy these computers need to run for a year is roughly the same as the energy necessary to power Argentina, a country of 45 million people, for the same time frame.

Because of their similarities, you’d expect both bitcoin and gold to perform well under current conditions. But as you saw, gold is struggling.

This brings us to Teeka’s big call…

As he told his Palm Beach readers, there’s one reasonable explanation for what’s happening…

Gold has finally been replaced by something better. And that something is bitcoin.

I know this may be hard to accept. It is for me, too. As longtime readers know, I’ve been very pro-gold ever since we launched the Cut in August 2018.

But Teeka was right on bitcoin when he first recommended it to his readers at about $400 a coin in April 2016. He’s handed them the opportunity to make as much as a 13,900% gain since then.

And he recently had Palm Beach Confidential readers take profits on 13 other coins in the model portfolio. They were up an average of 4,733%.

So it’s worth at least hearing him out… even if you’re a dyed-in-the-wool “gold bug.”

He shared this passage from Scientific American with his readers…

In 1907, there were 140,300 cars registered in the U.S. and a paltry 2,900 trucks. People and goods still travelled long distances on land by railroad, and short distances by foot or horse-drawn carriage. […]

That’s how Teeka sees gold and bitcoin. Here he is with more…

It’s not hard to imagine bitcoin replacing gold in the same way. One study from deVere Group, an independent financial advisory organization, revealed that more than two-thirds of millennials prefer bitcoin over gold as a safe-haven asset.

They function similarly and offer many of the same benefits. Bitcoin is equally scarce, durable, and private as gold. But it’s more easily stored, transported, and exchanged than gold. That makes gold the horse… and bitcoin the car.

Now, he recommends putting up to 10% of your portfolio in bitcoin alone… up to 2% in other cryptos… and up to 1% in gold.

As he explains it…

Now, am I saying this means you should sell every piece of precious metal you own? No. A small allocation to gold still makes sense as “end of the world” protection – say, in the event of a complete power grid failure or something else equally catastrophic.

But I believe it’s critical you have a much larger stake in bitcoin and maintain exposure to other cryptos. If that means taking money out of gold, so be it.

For example, if you have 10% of your assets in gold and just 1% in bitcoin, Teeka recommends you reduce your gold allocation to 1%… and up your bitcoin allocation to 10%.

And don’t worry that bitcoin now appears “expensive” at around $56,000. As Teeka wrote about yesterday, he believes we’ll see $500,000 bitcoin within five years.

What do you think?

Does Teeka’s stance on gold offend you? Or is he right to recommend shifting some of your gold into bitcoin?

As always, you can write us at [email protected].

The bitcoin versus gold debate is already raging in our mailbag. Here’s just small sample of the feedback we got last time we tackled this thorny topic…

Bitcoin is finite in supply and easily divisible, and it can’t be double-counted. It has no borders or central authority. If you live in a country where fanatics take over, your bitcoin is encrypted online.

You can send any amount of bitcoin to anyone in the world in minutes, for cheap. No government or authority can control the transaction or confiscate it, unless you let them.

Everyone is entitled to their opinion, but willful ignorance of the biggest change to money in modern history is pretty unproductive.

Gold has been used as a store of value for millennia. But our puppet masters have ways of controlling gold by beating down the price. And if enough “deplorables” become interested in gold, I would not exclude confiscation.

Bitcoin is not as easy to handle and understand as gold. It needs computers and encryption to live. But it has the advantage that there is currently no known way of controlling it. Even governments have failed so far to destroy it.

Conclusion: I am not willing to put all my reserves into gold. It’s too easy to manipulate. That’s why I prefer to trust both gold and bitcoin.

I’m in my mid-30s, and I’ve been into bitcoin and a lot of other cryptos over the last few years.

I’ve spoken with people aged 50 and above. 99% of them say bitcoin and digital assets just don’t make sense to them. But gold does, because it’s been around for a long time.

I’ve also spoken with people aged between 20 and 40 years old, and about 60% of them see the vision of bitcoin. They know where the world is headed. Cryptos make perfect sense to them.

It’s easy to see where we will be 10 years from now. Bitcoin will take a huge share of the gold market. And a ton of new money will come into the system.

We all invest for the future, not for today. So why would anyone want to own something that will devalue in the years to come? Change will happen. That’s just part of life. We got around on horses for 4,000 years. Look at us now!

The world can crash and burn, or we can all hold hands around the campfire and sing Kumbaya… In either scenario, bitcoin rises in value over time. However, in the event of an EMP [electromagnetic pulse] attack or nuclear strike, those cryptos won’t mean much when the lights are out.

My parents instilled in me the “four Gs” for a successful life. God, gold, gardens, guns. If you’ve got those four things in your life, you can survive anything. God bless!

Gimme a break. Asking an investor to choose between gold and bitcoin is like asking a healthy adult to choose between love and sex. They each have wonderful qualities. And you can achieve a good balance with a mix of both.

Again, you can let us know where you stand on this debate at [email protected].

On Wednesday, March 31, at 8 p.m. ET, he’ll reveal all the details – including the name of this coin – in a free special event. Reserve your spot here.