I (Chris Lowe) even expect to get some angry feedback in the mailbag over it.

You can have your say, as always, at [email protected].

But my mission is to share with you the best big-picture ideas from the Legacy Research team on how to really move the needle on your wealth… no matter how controversial.

And the one idea generating the most controversy right now among your fellow readers is that bitcoin (BTC) could be replacing gold as investors’ go-to hedge against inflation and a weaker dollar.

This isn’t just some philosophical question. Getting the answer right could be the difference between retiring comfortably… and retiring in luxury.

The Legacy analyst who stirred up this controversy is Teeka Tiwari…

As his readers know, Teeka has been a long-term fan of gold.

At the start of the pandemic, he even urged our Palm Beach Letter subscribers to up their allocations to gold to shield their wealth from the inflation he saw coming.

But on March 22, he made a big call. He recommended his readers sell most of their gold and replace it with what he calls digital gold – bitcoin. As he wrote…

I no longer expect gold to adequately protect your wealth against the money-printing happening right now. I believe bitcoin and other cryptocurrencies are doing a better job – and will continue to.

More than that, I believe they’ll benefit from a surge in new demand as the rest of the world wakes up to the same realization.

Especially if you’re over the age of 40, you’ve probably long thought of gold as the ultimate inflation-proof asset.

And if you’re a hardcore gold fan – as I know many Legacy readers are – this idea may sound borderline blasphemous.

But even if you passionately oppose Teeka’s view on gold… read on.

At the very least, you’ll find his thoughts on this stimulating. You may even be convinced by his logic and make some changes to your own portfolio.

Gold and bitcoin are both “hard” currencies…

This has nothing to do with physical hardness. A hard currency is a currency that’s hard to produce more of relative to its existing supply.

To get gold out of the ground, you first have to invest vast sums. You need diggers, dozers, drills, licensing agreements, and lots of skilled workers.

And there’s a limited supply of gold on Earth. Gold is forged in outer space when giant neutron stars collide.

Astronomers first observed the creation of gold this way on August 17, 2017. Using well-placed telescopes in Chile, they spotted the blast in a galaxy called NGC 4993.

It shot glowing debris… including mind-boggling amounts of gold… into space at about one-third the speed of light.

So it’s likely new gold is being created somewhere in outer space. But on Earth, we have to make do with what’s already here.

Bitcoin shares these characteristics with gold…

Bitcoins are made in cyberspace, not outer space. But they’re still hard to produce relative to existing supply.

“Mining” new bitcoins requires shelling out on high-powered computers. Then you need roughly the same amount of energy to run them as you’d need to power all of Argentina. That costs a lot of money.

There’s a cap on supply, too. There’ll only ever be 21 million bitcoins. That’s baked into the protocol that governs the bitcoin network.

This “hardness” should make bitcoin and gold similarly desirable as inflation-proof assets. But as Teeka has been showing his readers, that’s not what’s been happening of late.

Gold has stagnated as bitcoin has soared…

The chart below goes back to the start of 2020 – right before the pandemic broke out. 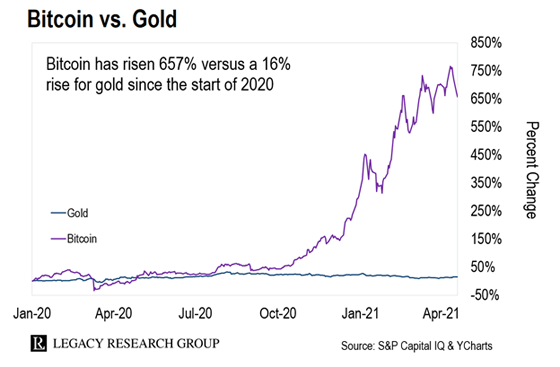 In other words, bitcoin investors have done 41x as well as gold investors.

Here’s something else odd… Gold isn’t even keeping pace with other commodities. Take a look… 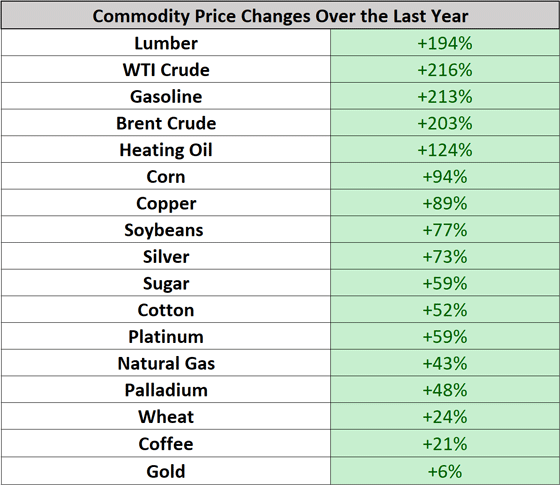 Since this time last year, gold is up just 6% versus an average gain of 94% for 16 other commonly traded commodities – all of which also individually posted higher gains than gold.

These should be the perfect conditions for gold to rise…

But it’s stayed more or less flat since the start of 2020.

Bitcoin and gold offer many of the same benefits – they’re scarce, durable, divisible, and private. Based on all the money-printing we’ve seen, gold’s chart should look like bitcoin’s. But it doesn’t.

If you’re a gold bug, it’s hard to accept that anything… let alone bitcoin… could replace gold. Gold has thousands of years of history as a store of wealth. Bitcoin has been around for only a decade. But people also used horses to get around for thousands of years. Then, in less than a decade at the start of the 20th century, the automobile rendered horses obsolete.

I view gold as the horse and bitcoin as the automobile. As more people come to terms with this, bitcoin’s price will soar higher.

Teeka’s insights on crypto are worth paying attention to…

He’s been spreading the word on bitcoin for the past five years.

In April 2016, he officially recommended the cryptocurrency to our Palm Beach Letter and Palm Beach Confidential readers.

That showed remarkable prescience and courage. Back then, the mainstream narrative on bitcoin was that it was a Ponzi scheme or a currency for criminals and money launderers.

Teeka saw a future of mainstream adoption instead. And he understood that the new demand would push prices higher.

He recommended bitcoin at $428 and ether (ETH) – the crypto associated with the Ethereum blockchain – at $9.

And these aren’t even Teeka’s biggest winners.

I’m not cherry-picking, either. Of the 68 open positions in Palm Beach Confidential, the average return is 2,724%.

After escaping Britain’s foster care system, he got a job on Wall Street.

At just 19, he became the youngest-ever vice president of mainstream financial firm Shearson Lehman. Later, he ran his own hedge fund.

All that time, he was a big fan of gold.

That’s why his latest call is worth reflecting on.

Let’s say you didn’t already have a dog in this fight. Is it so hard to imagine, in an increasingly digital world, bitcoin taking over from gold as the go-to inflation hedge?

Personally, I’m still a fan of gold. I don’t think it will lie dormant forever.

But I’m open to Teeka’s idea. As he points out, over the next 25 years, younger Americans will inherit $68 trillion from their parents and grandparents.

And young folks overwhelmingly prefer digital assets to gold. DeVere Group is an independent financial advisory firm. In a survey it conducted, more than two-thirds of millennials said they preferred bitcoin over gold as a safe-haven asset.

Does this mean selling all your gold?

A small allocation to gold still makes sense as “end of the world” protection. Say, in the event of a complete power grid failure or something else equally catastrophic.

In some largely unforeseeable event like that, gold could end up skyrocketing overnight and keep you afloat. But I believe it’s critical you have a much larger stake in bitcoin and maintain exposure to other cryptos. If that means taking money out of gold, so be it.

He believes this will not only better shield your wealth against inflation, but also give you far higher upside potential.

You may still be skeptical of Teeka’s claim…

So was his new chief analyst at The Palm Beach Letter, Nilus Mattive.

As I’ll show you tomorrow, Nilus has long been a precious metals guy… and an agnostic on bitcoin.

He recently discussed this topic with Teeka… and pushed back hard on Teeka’s idea that bitcoin is replacing gold.

Did Teeka manage to convince Nilus that bitcoin is the new gold?