If you’re of a certain age, you’ll remember it well.

President Clinton was still in the White House… Bon Jovi and Madonna were still topping the charts… Moviegoers were packing theaters to see Tom Hanks talk to a volleyball in Cast Away.

If you were unlucky enough to be holding tech stocks… you got slaughtered.

The Technology Select Sector SPDR Fund (XLK) tracks the 70 largest tech stocks in the S&P 500. It finished down 41% for the year. 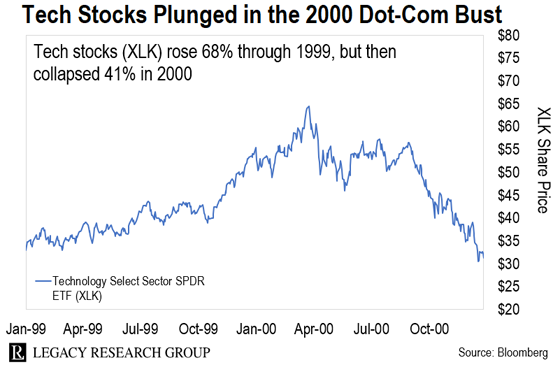 And during the global financial crisis, tech investors took a second hit to the gut. In 2008, XLK plunged 42%. 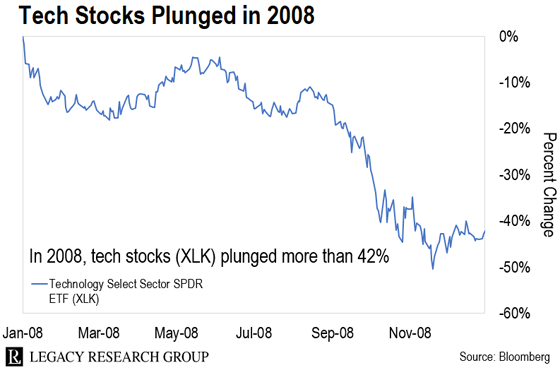 But as you’ll see in today’s dispatch, something fundamental has changed since then. Instead of falling in this recession, tech stocks have been going up…

My name is Chris Lowe. I’m your editor.

It’s my job to keep you plugged into the market megatrends the analysts here at Legacy Research track for their paid-up subscribers.

And one of the most profitable megatrends we track for you is the exponential growth of tech.

Here’s how our resident tech expert, Jeff Brown, put it to me in an interview for our Legacy Inner Circle advisory back in February 2019…

Future job growth is almost exclusively in companies and industries that are driven by technology. And this is a trend that’s only going to accelerate as tech fills ever-larger parts of our lives.

As I’ve been telling my readers, there are a number of tech megatrends already in motion. For instance, self-driving cars… 5G wireless technology… and artificial intelligence (AI).

The companies providing products, solutions, and services related to these and other tech megatrends are the ones with the most significant growth potential. They’re going to be the next Coca-Cola… the next Disney… and the next IBM.

As regular readers know, Jeff is a former Silicon Valley insider with more than two decades’ experience in the C-suite of some of the most advanced technology companies.

This gives him an insider’s view on what’s going on with tech. And he nailed it with his February 2019 call… Tech stocks have become the new blue-chips.

By many measures, we’re in the deepest recession since the Great Depression.

The Atlanta Fed projects a 53% drop in April-to-June GDP.

About 13% of Americans looking for work can’t find it – levels we last saw in the 1930s. And large parts of the economy remain shuttered… or partly shuttered… due to the coronavirus pandemic.

There are now 9.3 million confirmed cases of COVID-19 worldwide. In the U.S., states including Florida, Texas, and California are seeing spikes in new confirmed cases.

Add in civil unrest and nationwide protests following the killing of George Floyd… and the near-term outlook isn’t exactly rosy.

But look at how tech stocks have performed during this recession… 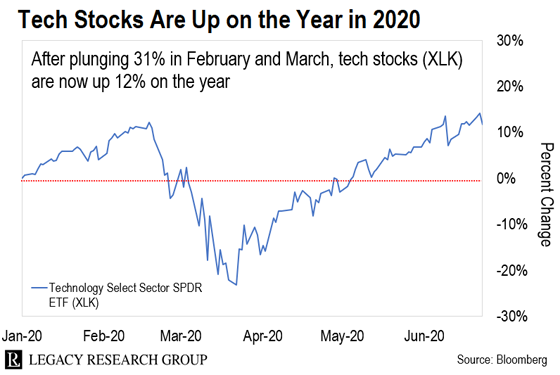 XLK plunged as much as 31% in February and March. But it’s promptly recovered those losses. And it’s now up 12% on the year.

And individual tech stocks have skyrocketed this year… 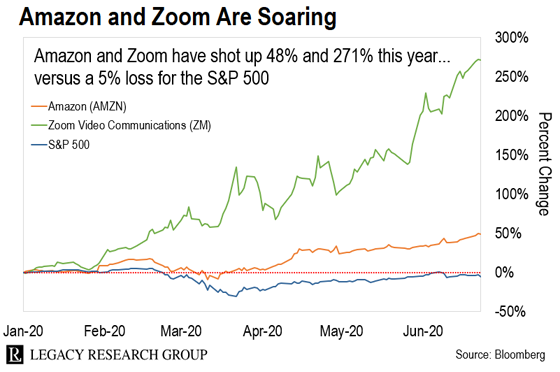 AMZN and ZM aren’t the only tech stocks thriving. Peloton (PTON), the tech-enhanced exercise bike company, is up 92% in 2020.

Tech profits have been remarkably solid during this crisis, too…

It’s all in this next chart of the five largest tech stocks in the S&P 500.

As you can see, in normal, non-recession times, the FAAMG stocks have an average profit margin about double that of the S&P 500.

Here’s Jeff again with more on that…

There’s limited downside risk in the right tech investments. They’re rapidly expanding into new markets all the time. So it’s not about fighting against your competitors for market share in a static or shrinking market. It’s about trying to expand the size of your market as much as possible.

That’s why I’m so keen to get as many Legacy Research readers as possible to invest at least a portion of their wealth in technology stocks. I think it’s critical… if you’re serious about building wealth over the next decade and beyond.

For the best technology firms, like the ones I recommend, it isn’t business as usual. They’re not simply improving on an existing product that’s been around for decades. They’re inventing entirely new products.

These companies are paradigm shifters. In many ways, they are literally powering the future. You won’t find that kind of massive profit potential anywhere outside of tech.

Last December, Jeff closed out a two-year position in chipmaker Advanced Micro Devices (AMD) for a 278% gain in his Near Future Report model portfolio.

Since he recommended chipmaker Nvidia (NVDA) to readers in January of last year, it’s up 170%.

And since he recommended shares in cloud-based contracts management firm DocuSign (DOCU) in April of last year, they’re up 213%.

The average gain across Jeff’s 24 open recommendations is 43%.

Now, the stocks I listed above have gone over Jeff’s recommended buy-up-to prices. So they’re not recommendations at today’s prices.

But you can still get broad exposure to tech by picking up shares of the Technology Select Sector SPDR Fund (XLK).

We saw some more volatility in the stock market today… with the Dow, the S&P 500, and the tech-heavy Nasdaq falling more than 2% apiece. And we could easily see more price falls before we’re at the other end of the coronavirus crisis sometime next year.

But if Jeff is right, XLK will give you surprisingly limited downside risk… and huge upside potential… as the tech megatrend rolls on.