One niche mining sector will soar under Team Biden…

Don’t worry, I (Chris Lowe) am not going to try to push your political buttons.

You can find wall-to-wall coverage of Washington’s partisan mudslinging in the mainstream press.

Our beat here at the Cut is money – how to make it and hold on to it.

That’s why, today, I want to make sure this mining megatrend – “tech metals” – is front and center on your radar.

Over the past eight months, two tech-metal mining stocks Dave Forest recommended at our Strategic Investor advisory are up 353% and 609%.

Those gains are exceptional. But Dave believes the best is yet to come…

That’s due to some of the Biden administration’s specific plans. As we’ll cover today, these will be accelerants for the next leg of this already hugely lucrative rally.

Each week, thousands of folks like you seek out the independent investment insights and recommendations we publish at Legacy Research.

The Daily Cut is the e-letter we created for you and your fellow paid-up Legacy readers so you never miss a big idea from the team.

And one of the ideas we’re most excited about right now is a revolutionary energy shift that’s underway. It’s something our cofounder Doug Casey has called a “gigantic economic earthquake.”

I’m talking about the move from a world centered on oil-powered internal combustion engines… to one centered on high-tech, industrial-strength, rechargeable “lithium-ion” batteries.

To hold a charge, these batteries all need metals… such as lithium, cobalt, and nickel… that mining companies must haul out of the ground.

If you don’t already know him, Dave is our globetrotting “rock hound.”

He’s spent the last two decades with his boots on the ground, searching for new discoveries and breakthroughs in the natural resource sector.

Over that time, he helped develop the sixth-largest platinum-producing district in the world. He also discovered more than 1 billion pounds of copper in Asia and South America.

And here at Legacy, he’s given paid-up readers of our International Speculator and Strategic Investor advisories the chance to make gains of 357%… 411%… even 571% on the world’s most promising tech metal stocks.

The first major energy shift was when we went from burning wood to burning coal. This happened in the late 19th century. At the turn of the 20th century, we had another shift from burning coal to oil with the birth of the automobile. The third shift was toward widespread use of uranium as a source for nuclear power in the 1960s.

Now, we’re seeing the fourth shift. It’s toward energy storage in the form of high-tech batteries.

This kind of shift happens only once in a lifetime… if you’re lucky. And when it does, the profit opportunities can be massive.

Imagine catching one of these past energy shifts…

The shift underway is great news for investors in tech metals…

Even though they’re called lithium-ion batteries, lithium isn’t the only metal that goes into them.

The batteries that power every Tesla (TSLA), and every other electric vehicle (EV) on the road, also contain nickel, cobalt, manganese, aluminum, iron, and phosphate in varying mixes.

And we don’t need tech metals for just the EV revolution. We also need them for the 5G wireless internet megatrend we track for you.

Military drones can’t fly without tech metals either. And these metals are necessary for a host of other high-tech military hardware, including night-vision goggles, communications equipment… even fighter jets.

Plus, tech metals are critical ingredients in the batteries we use to store power from renewable sources and then add it to the grid.

I first wrote to you about this emerging market megatrend in our October 2, 2018, dispatch.

I called it a “game changer for the mining business.” And I pointed you in the direction of the Global X Lithium & Battery ETF (LIT).

It’s an exchange-traded fund (ETF) I said would be a second-best option to the individual tech-metal mining stocks Dave recommends to his paid-up readers. 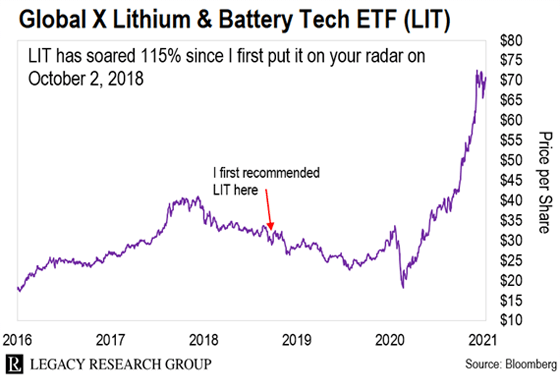 Since then, LIT is up 115%… enough to more than double your stake.

That does NOT mean it’s too late to profit. Megatrends tend to run on the order of years… even decades.

And as Dave has been shouting from the rooftops, Team Biden is going to light an even bigger fire under this already red-hot opportunity.

As a voter, you may or may not be in favor of that. That’s up to you.

But as an investor looking to move the needle on your wealth, you should know that a big chunk of that money will fuel the rally in tech metals. Take it from Dave…

A Democrat-led government isn’t going to eliminate oil and gas. That’s not what this is about. But it is going to digitally “print” trillions of dollars that didn’t exist before. A big chunk of that will go toward the metals in EVs.

It will take time to see exactly how this plays out. But it likely means policy support for mining – and perhaps direct financial aid, like we’ve seen recently in the rare earths sector.

It’s based out of Charlotte, North Carolina. And it’s the largest provider of lithium for lithium-ion batteries.

This came after CEO J. Kent Masters told Bloomberg he believed the lithium market would benefit from a Biden administration. As Masters put it…

There’s the incentives, and the emphasis that’s put on electrification and EVs around that. The market side of it would be more favorable with Biden.

Biden has promised to replace the government’s fleet of about 650,000 cars and trucks with EVs.

He also ran on the promise to build 550,000 EV-charging stations along U.S. highways.

And a proposed tax credit could narrow the cost gap between EVs and traditional, gasoline-powered cars.

This is more than just a U.S. phenomenon…

By 2025, China – the world’s largest auto market – wants EVs to account for one in five new car sales.

Germany has extended subsidies on EVs for an extra four years. And starting in 2030, Britain will ban sales of new petrol and diesel cars.

And that’s before you get to all the batteries we need for every laptop… smartphone… and rechargeable electronic device on the planet.

I’m running out of space today to get into all the details. But stay tuned tomorrow for how exploding demand for these metals will send prices rocketing even higher.

As you’ll see, rising demand from the EV sector alone is expected to suck up nearly every pound of lithium we have on the planet…