Another sign the top is in for stocks… These “generals” are beating the retreat… The S&P 500 can’t shake this powerful drag… In the mailbag: Do we need to get our “Libertarian heads” out of the sand?

That’s how much investors wiped off the market value of Apple (AAPL) between the closing bell ringing on Wall Street yesterday and this morning’s market open.

After a furious rush for the exits during after-hours and early-morning trading, Apple shares opened down by nearly 9% this morning.

And when you’re at a nearly $1 trillion market value, like Apple is, that’s a big hit in dollar terms.

You could buy all the outstanding shares of Starbucks (SBUX) for $79 billion – just $5 billion more than Apple lost in less than 24 hours.

The trigger was a bearish statement from Apple CEO Tim Cook…

He took the unusual step of lowering the company’s fourth-quarter sales guidance via a letter to shareholders.

And Wall Street analysts weren’t happy about the news one bit. As Bloomberg reported earlier today…

At least four firms reduced their share price forecasts for the iPhone maker by more than 15% after Cook said Wednesday that the company expects sales of about $84 billion in the quarter ended Dec. 29, down from earlier estimates of $89 billion to $93 billion.

The new estimate would mean Apple is reporting a holiday quarter slowdown for the first time since Cook became CEO in 2011.

It’s also a problem if you own an exchange-traded fund (ETF) that tracks the S&P 500.

Apple has been one of the highest-flying S&P 500 stocks during the bull market. 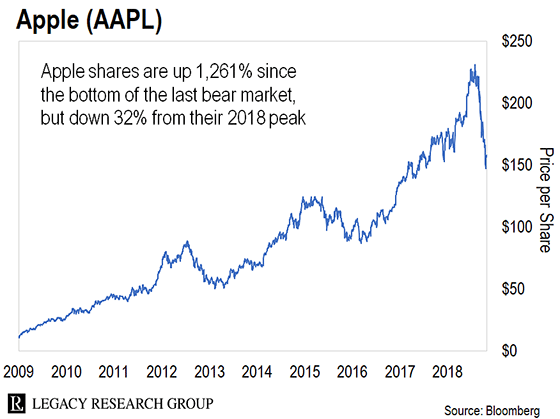 That’s been a powerful lift for the index… and anyone holding an S&P 500 tracker fund.

But since they peaked last October, Apple shares have led the way on the downside, too.

The most valuable companies drive the bus when it comes to the S&P 500.

And it’s what most folks are referring to when they talk about “the U.S. stock market.”

The S&P 500 tracks 505 stocks in the 500 most valuable U.S. companies that trade on the New York Stock Exchange or the Nasdaq. (Five of these companies issue two classes of stock, hence the discrepancy.)

That makes it a great way to track the health of the U.S. stock market.

But it doesn’t treat each of those 505 stocks equally. Instead, each stock is “weighted” by its market value.

The bigger a company’s market value is, the bigger the sway it has over the index… and anyone taking a broad bet on “the U.S. stock market.”

Here’s an example of how it works…

In other words, giant Apple has 200 times the weight in the S&P 500 than minnow Mattel.

And it’s not just Apple…

The top five stocks in the S&P 500 by weighting are Microsoft, Apple, Amazon, Berkshire Hathaway, and Johnson & Johnson. If all stocks in the index were treated equally, these five companies would represent just 1% of the index.

Like generals lead their troops, these stocks lead the rest of the stock market – in both directions.

Put another way, when investors sour on the biggest and most popular stocks in the S&P 500, it’s a sign the market’s topping.

The generals drive the indexes higher when they’re in rally mode. But as investors rush for the exits – as they’re doing with Apple right now – they become a powerful drag.

That’s why Apple’s tumble isn’t just a problem if you own individual Apple shares.

For the market to stop plunging and start recovering from its worsening losses, we need the generals to start rallying.

And for Apple watchers wondering if they should “buy the dip”…

Let’s hear from Jeff Brown, who heads up our flagship technology investing advisory, The Near Future Report.

If you don’t already know Jeff, for the past 26 years, he’s been a Silicon Valley insider.

He served at an executive level for some of the most successful tech companies in the world – including Qualcomm, Juniper Networks, and NXP Semiconductors.

He’s also been involved in the early stages of over 100 tech startups… and is currently a formal advisor to eight more.

In his letter to shareholders, Cook tried to pin the blame for Apple’s sagging sales on a slowdown in China. But Jeff says the company’s problems run a lot deeper than that.

First, Apple has priced itself out of a portion of the smartphone market. Its new flagship iPhone X will set you back $999 for the most basic model. And prices go as high as $1,499, if you get the larger-screen XS model with all the bells and whistles.

In a market that tends to see declining prices against increased functionality over time, Apple is raising average prices in a meaningful way. That puts it out of reach for millions of potential customers and hurts its ability to grow market share.

Second – and even more problematic – the latest round of features just aren’t compelling enough for its traditional base to shell out that kind of money for the new phones. I bought the iPhone XS. And I’m disappointed. For what it is, it should be $200 to $300 cheaper than the previous model.

So the message is clear: It’s best to take a wait-and-see approach with Apple right now.

As for the rest of the stock market, it continues to plunge…

As we’ve been telling you since October, caution is warranted right now. It’s a great time to own plenty of cash and gold. Stocks may still recover. But the big risk is to the downside.

In the mailbag: “It’s time that Doug Casey and others get their Libertarian heads out of the sand”…

The debate turns back to the hot-button issues of pot legalization and the autonomous electric vehicle revolution, after comments from readers Nico P. and Brian P. (catch up here and here)…

Nico has obviously not read the exhaustive studies done on cannabis. He apparently gets his information from the same source that [Jeff] Sessions did. Or undoubtedly more accurate, he has no source of information, only his uninformed opinion.

Destroying our youth? Pot was the drug of choice for our youth in the 1960s and ‘70s. Have you not heard about the world-wide opioid problem? Have you not heard of ecstasy and all the other chemically manufactured drugs that the youth use today? Are you totally unaware of the deaths directly attributed to alcohol and tobacco? Do you live in a cave? Can you name a single country that has decriminalized all drugs that doesn’t say they no longer have a problem?

Turn off your TV, Nico, and read. You’ll be surprised what you can learn.

I really think that the position of total legalization of drugs is wrong, and I think the spread of legalization of marijuana is the “death knell” for the continuing existence of the United States as a First World country.

I think it’s time that Doug Casey and others get their Libertarian heads out of the sand on this issue and think beyond their sacred individual rights to do whatever the hell one wants, and consider matters on a wider, societal level.

Brian P. has hit the nail on the head – electrical infrastructure simply isn’t up to the task. Both the USA and Europe (and I would bet China and India as well) are woefully behind in their ability to support the electrical demands of electric vehicles (EVs), never mind self-driving cars. Doug Casey’s take on the EV revolution is likely correct, but it will certainly be over a much longer period while the power grids are upgraded to meet the demand, and while the Nimbys continue to throw every possible obstacle into the mix.

Oh! And imagine running out of power in the middle of the night on some lonely stretch of road in the rural countryside. You can’t hail a passing motorist to take you to the nearest power point for a bucket of volts. It will likely be government mandated that all EVs carry a “get-you-home” spare battery to lug around, i.e. extra weight, less overall efficiency.

Is Legacy Research cofounder Doug Casey right that all drugs should be legalized? Or do you agree with reader Bill D. that it’d only have a negative impact on society? Give us your take at [email protected].