My mission here at The Daily Cut is to make sure you never miss a moneymaking idea from Teeka Tiwari, Jeff Brown, Dave Forest, Nomi Prins, and the rest of the Legacy Research team.

And in the July 19, 2021, dispatch I spotlighted an idea from Dave on how to tackle rising inflation…

It’s a real estate investment trust that leases farmland in 15 states across America.

And it’s been performing exactly how Dave predicted it would as inflation rises.

LAND is up 55% since we highlighted it in these pages last July. And it’s up 80% since Dave first recommended it to our paid-up Strategic Investor readers last May.

As we’ll get into today, it’s another great example of how to stop inflation from eating away at your wealth.

Farmland is a “hard asset”…

They have intrinsic value. And they’re hard to produce more of relative to their existing supplies.

This makes them different from the fiat currencies central banks and commercial banks can (and do) create at will.

Take crude oil. We need it to power our transportation and generate our electricity. And it’s the result of millions of years of pressure on animal and plant remains. You can’t make more of the stuff on a whim.

The same goes for farmland…

You can use it to grow crops and raise livestock. And there’s a limited amount of it on Earth. That makes it inflation-proof.

After it lost World War I in 1918, Germany began one of the worst bouts of hyperinflation in history.

In January 1923, a loaf of bread cost 250 Papiermarks (Germany’s currency at the time). By that November, you needed 200,000 million Papiermarks to buy the same thing.

But the Inflation King – a German businessman called Hugo Stinnes – made a fortune.

He made so much money during the country’s hyperinflation, TIME magazine featured him on its cover in March 1923.

Stinnes was born in 1870 to a coal-mining family…

After his father died, he expanded the family business to include a shipyard and ships trading throughout Europe. 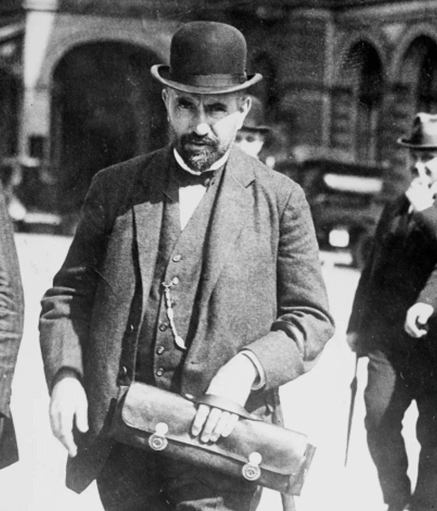 And Stinnes used the inflation-beating strategy I outlined above. He swapped increasingly worthless Papiermarks for hard assets. Over to Dave…

Stinnes realized the increase in the German money supply was bad news. He knew it would ultimately erode the buying power of the Papiermark.

Everything he’d worked for over the years was at stake. So he borrowed in Papiermarks then used it to buy mines and real estate.

He knew these hard assets would increase in value while his paper money became worthless. Then he paid off his debt with that paper money.

The supply of farmland isn’t just scarce… Relative to the size of the world’s population, it’s shrinking.

It’s also due to rising temperatures and droughts around the world, which are rendering farmland unusable.

Meanwhile, the United Nations expects there to be about 10 billion people on Earth by 2050. That’s up from about 8 billion today.

It’s all in this chart of arable land per capita worldwide going back to 1960. 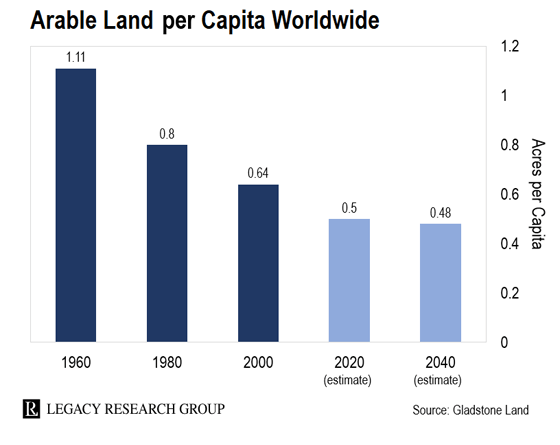 And that’s before we get to the war in Eastern Europe.

Remember, Ukraine is the breadbasket of Europe.

Although it’s 13% smaller than Texas, it’s home to about 25% of the world’s super-fertile “black soil.” And it has 42 million hectares of arable land. That’s about a third of the arable acres in the U.S.

And right now, much of that land is in the middle of a warzone, making it largely unusable.

So how do you play it?

But we’re in a volatile market. We could easily see a dip before another climb higher. So keep an eye on LAND shares. If they drop below $30, they’re a screaming buy.

Meantime, remember that the best way to beat inflation is by investing in hard assets. And consider joining Dave as a Strategic Investor subscriber…

He’s been knocking it out of the park there with his hard asset recommendations.

For instance, a play on oil exploration company Occidental Petroleum (OXY) he recommended in October 2020 is up 1,180%.

Dave is keeping the focus on other hard asset plays this year.

For instance, he just recommended a company that mines one of the metals that goes in electric vehicle batteries.

To find out more about joining Dave as a subscriber, check out the urgent briefing he put together on hard assets and inflation. You can access it here.