Chris’ note: This week, Jeff Brown is taking over the Cut. He’s best known for his tech stock recommendations. But he’s also a successful crypto investor. Only he hasn’t done it the usual way.

Instead of investing directly in cryptos, he put a large chunk of his money into a little-known type of private investment he calls “crypto placements.” These are early-stage investments in some of the world’s most lucrative crypto projects.

So make sure to sign up for that for free here. Then read on below for more from Jeff on why wealthy investors put so much of their money into private deals.

In yesterday’s Cut, I introduced one of my favorite investment ideas for 2022. It’s where I’m putting my own money now.

Yesterday, I shared my vision for the future of blockchain and crypto. Today, I’ll focus on the second part of the equation – private investing.

Last month, I took the stage at the Mandarin Oriental hotel in Washington, D.C., for the third annual Legacy Investment Summit. Hundreds of subscribers sat before me. Several hundred more watched virtually.

During the summit, one of the most popular questions was some variation of, “What should I do now?”

I know these are trying times. Markets have been highly volatile this year. Inflation is at a 40-year high. Everyday goods are scarce. And there’s a brutal war in Eastern Europe.

So today, I’ll tell you what I told conference attendees. And I’ll share what I’m doing in my own portfolio as stock and crypto markets swing.

As you’ll see, you can use the same strategy to create your own generational wealth in the years ahead.

How the Wealthy Sidestep Volatility

You may think gold and silver are best to protect and grow wealth as stocks tumble.

That’s not a bad idea. I own several hundred ounces of silver coins for that reason. But this isn’t my favorite strategy for today’s volatile markets.

And it’s not the idea I shared with summit attendees.

Instead, I shared this chart…

How much of their portfolios wealthy investors have in private investments. Source: UBS/Campden Wealth Global Family Office

It shows what percentages of their portfolios different types of wealthy investors have allocated to stocks that have yet to go public and list on a stock exchange such as the New York Stock Exchange or the Nasdaq.

As you can see, wealthy investors and family offices – private wealth management firms that serve wealthy families – have nearly half their portfolios in private investments.

Endowment funds – funds set up to benefit universities and non-profit organizations – have more than half of their portfolios in private deals.

Meanwhile, regular investors have nothing in these investments.

Why are wealthy investors putting nearly half of their capital into private companies? They know small investments in the right ones can create generational wealth. The returns from great private companies will easily outpace inflation and then some.

And private investments don’t trade on public markets. So there’s no daily volatility like there is in public stocks and cryptos. This makes private deals pure “set it and forget it” investments.

Wealthy investors have known this for a long time. That’s why they’ve been investing in private companies for decades.

And as I told your fellow Legacy subscribers in D.C., it’s time for you to do the same.

Your Chance to Become a Venture Capitalist

Until recently, investing in private shares was virtually impossible for everyday investors like you. Most opportunities were restricted to accredited investors – folks with net worths of more than $1 million or who’ve made at least $200,000 a year for the past two years.

This always seemed unfair to me. The government allows you to go to a casino and gamble your paychecks away. But it doesn’t allow you to invest in private companies the way wealthy investors do all the time.

Luckily, in November 2020, the Securities and Exchange Commission (SEC) – the main U.S. stock market regulator – changed the regulations around investing in private deals.

Most relevant was an increase in the total amount of money a private company can raise through two crowdfunding options. Both allow regular investors to take stakes in companies before they go public.

These limits are for a 12-month period. So after 12 months, the company can sell more private shares to investors in return for further funding.

With a $5 million limit, a fully funded Reg CF offering is now on par – if not better – than most traditional initial funding rounds with venture capitalists (VC).

And a Reg CF offering has better terms for investors and founders than most early stage VC rounds. For example, the minimum Reg CF investment is often just $100.

We can already see the impact of this on early stage capital formation.

SEC figures reveal that, from 2019 to 2021, the number of new Reg CF offerings per month more than doubled. 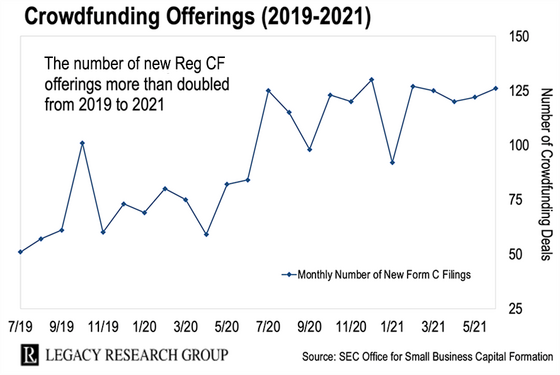 And in three of the last four quarters, Reg A+ offerings have brought in more than $1 billion a quarter. 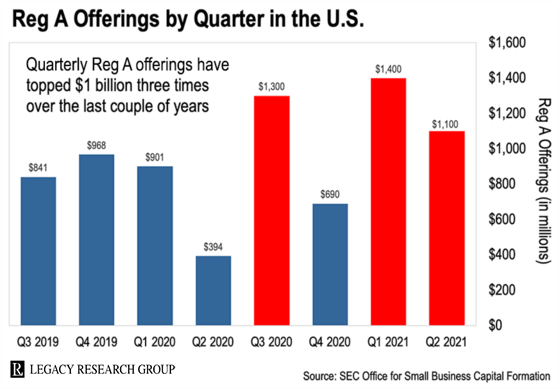 This growth in funding is a direct result of the SEC’s changes. Now, private investing is a realistic option for regular investors.

So which private companies should you gain exposure to?

In tomorrow’s Daily Cut, I’ll answer that question. I’ll also explain more on why I’m focused on crypto placements in my personal portfolio.

Then, at 8 p.m. ET tomorrow, I invite you to join me for my Crypto Placements Summit.

So reserve your free spot here. Then clear some time in your schedule for tomorrow’s summit.