Bitcoin has hit a high for the year…

The world’s first cryptocurrency started the year at $7,200. 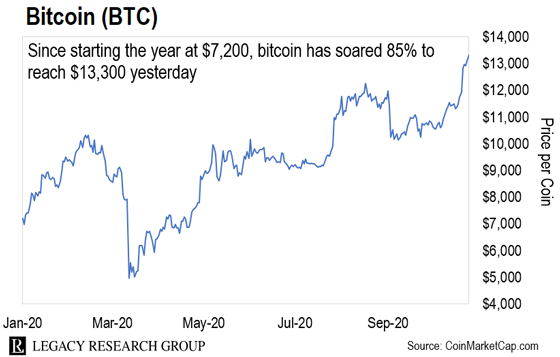 That’s a gain of 85%. And it’s the highest level bitcoin has been at all year.

This follows news out last week that PayPal (PYPL) will allow its 346 million customers to hold bitcoin and other cryptos in a new online wallet.

PayPal will also allow them to shop using crypto as easily as they can with dollars with the 26 million merchants in its network.

It’s more good news for Daily Cut readers who responded to our long-running campaign to get you to buy some bitcoin.

But don’t worry if you’ve missed out on the gains so far. If Teeka is right, we’re still in only the early innings of the bitcoin bull market.

By a megatrend, I (Chris Lowe) mean an emerging, unstoppable force impacting society, our economy, and our lives.

Think the birth of the motorcar… or air travel… or radio, TV, and the internet.

Folks who’ve grasped what was going on with these megatrends ahead of the crowd could have had the chance to make life-changing returns.

Take Zenith Radio. It was one of the best-performing Great Depression stocks. This was the Golden Age of Radio. And between 1932 and 1954, Zenith soared 24,146%.

In 1962, as the automobile trend was entering full swing, you could have bought a share of the then small oil driller for $1.62.

There are more recent examples, too…

The one that sticks out in the internet age is Jeff Bezos’ Amazon.com (AMZN). 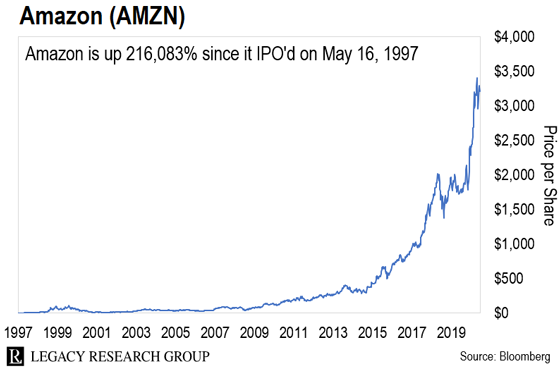 These mammoth gains seem obvious to us now. That’s because we have the benefit of hindsight.

But in the 1990s, the internet still wasn’t a sure thing…

It’s now clear that the internet was a game changer.

And it seems perfectly normal that the five largest stocks in the world are internet stocks.

But cast your mind back to 1997… when Amazon went public.

Bill Clinton had just begun his second term in office. Seinfeld was still running on NBC. We still watched home movies on VHS. And Macs and PCs still came with floppy-disk drives.

Most folks didn’t know what the internet was. Many who did were skeptical of its potential.

Take Robert Metcalfe. He co-invented Ethernet. It’s one of the key networking technologies that make up the internet to this day.

I predict the Internet will soon go spectacularly supernova and in 1996 catastrophically collapse.

Their skepticism was understandable…

In 1997, there were only 16 million people with internet connections. That was about 0.4% of the world’s population at the time.

And they were still using noisy, slow, clunky dial-up modems to get online. For most folks, that meant you couldn’t make or receive phone calls at your house while you were online.

It also meant websites had to stick mostly to basic text and links. Images downloaded pixel by pixel, at a snail’s pace compared to now. So web designers had to use them sparingly. 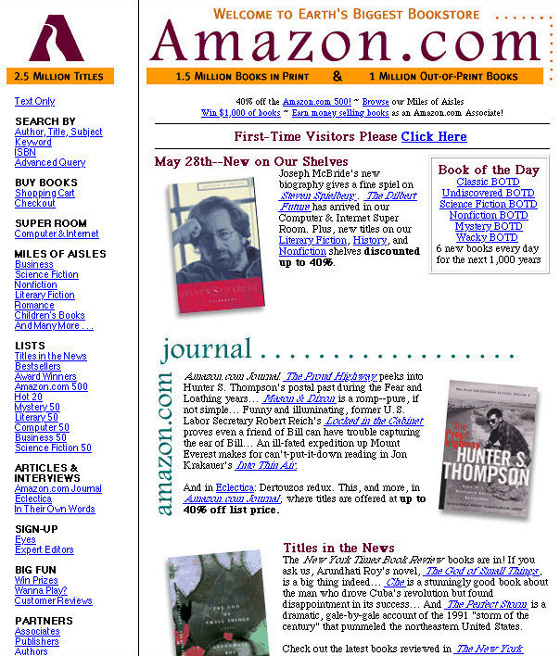 This is ultrabasic by today’s standards. It was hard to imagine back then what the internet could become.

But since then, there’s been wave after wave of adoption and innovation – including broadband, music and video streaming, social media, peer-to-peer file sharing, mobile web, and 4G and 5G wireless networks. Today, 4.8 billion people are online.

Meantime, internet stocks have been among the most powerful wealth generators on the planet. And early investors who stuck with the trend are sitting on fortunes.

For years, he’s been hammering on the same message to his followers…

Similar to what happened with the internet… waves of adoption and innovation will take bitcoin from a niche to a mainstream asset.

The supply of bitcoin is capped at 21 million coins. So that extra demand means one thing – higher prices.

When a technology starts to benefit from this virtuous circle, it’s transformative. It’s also rocket fuel for stocks.

In 2003, while I was still on Wall Street, I started recommending Apple (AAPL) to my clients. It wasn’t the investor darling it is now. Steve Jobs… the founder of the company and the guy the board brought back in to rescue it… was dumping millions of dollars’ worth of Apple stock. People thought I was crazy to be so bullish.

Back then, Apple’s biggest product was the iPod. But only folks with an Apple computer at home could use it. So the addressable market for the iPod was only about 3% of computer users.

But I knew the company was working on a version of the iPod that would be compatible with PCs running Windows software. And PC users made up the other 97% of the market.

Apple had innovated a breakthrough new way of listening to music on the go. And it was on the cusp of widespread adoption.

Teeka says the decision to buy Apple was easy…

I went out, bought an iPod, and confirmed it was an amazing device. I immediately recognized it was the most transformational music device since the Sony Walkman of the 1980s.

So it was a no-brainer that PC users would fall in love with the iPod – just as Apple users had. Except this time, Apple could sell iPods to a market of hundreds of millions of PC users instead of the fewer than 10 million Mac users sales were previously limited by.

That worked out well for Teeka’s clients. From the launch of the PC-compatible iPod in April 2003 to today, Apple shares are up, adjusted for new shares issued, 46,532%.

That’s why PayPal’s adoption of crypto is so big…

A lot of folks still don’t believe bitcoin and other cryptocurrencies are useful as money.

It actually came up around the dinner table last night. My folks (both in their 70s) are looking for ways to escape the zero… and even negative… interest rates that are available on their cash in Ireland, where I’m from.

I said they might want to put some of their cash into bitcoin. And the first thing my father asked was, “Can you actually spend bitcoin?”

The truth is, there’s still a long way to go before crypto is a widely used currency.

But the PayPal announcement brings crypto much closer to the mainstream.

PayPal has 286 million users worldwide. They’re all about to be able to buy, sell, store, and transact with crypto.

They’ll also be able to use crypto on the PayPal-owned Venmo mobile payments app. It has 40 million users in the U.S.

Make no mistake… Crypto is having its iPod moment. And now’s a great time to add some bitcoin to your portfolio. If you’re not sure where to start in buying your first bitcoin, check out our free special report here.