I (Chris) hope you had a great holiday with your friends and family and that 2020 is off to a good start.

I spent Christmas with my folks in Dublin, Ireland. And got the chance to recharge my batteries with the help of some home cooking… and more than a few Irish whiskey nightcaps.

Over the coming weeks, I’m going to be sharing with you some more predictions for the new decade from our team of analysts.

But to kick off the new year, I want to take you on a whistle-stop tour of our “Hall of Fame” trades in 2019.

I’ll also tell you a bit about what I believe should be the No. 1 move for building your wealth in 2020.

First, a quick look at how markets performed overall in 2019.

It was a banner year for the U.S. stock market…

That’s going by our regular market stand-in, the S&P 500. 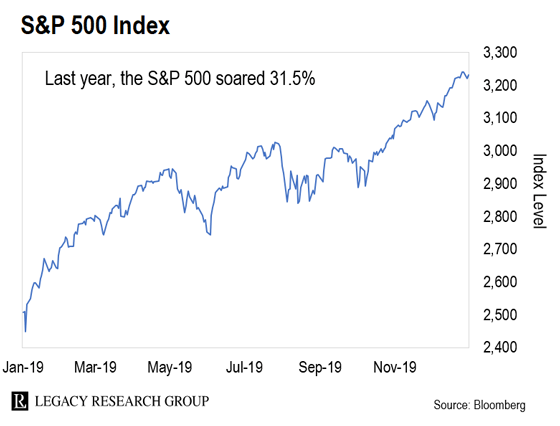 The tech sector did even better…

The Nasdaq-100 Index tracks the 100 largest U.S.-listed nonfinancial stocks in the Nasdaq. 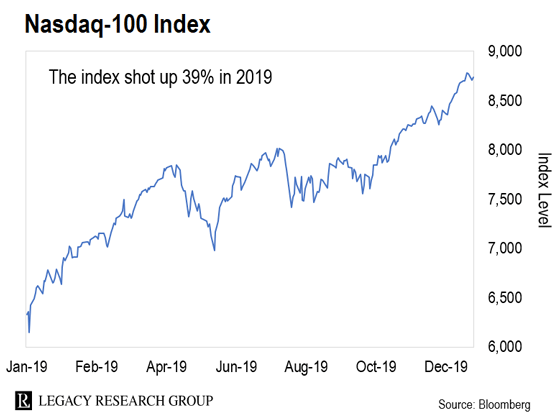 That’s the tech index’s 11th straight year of gains. And it’s the largest gain since 2009, when the index surged 55%.

As longtime readers know, we’ve been bullish on gold since we launched The Daily Cut in August 2018.

Gold stocks did even better. 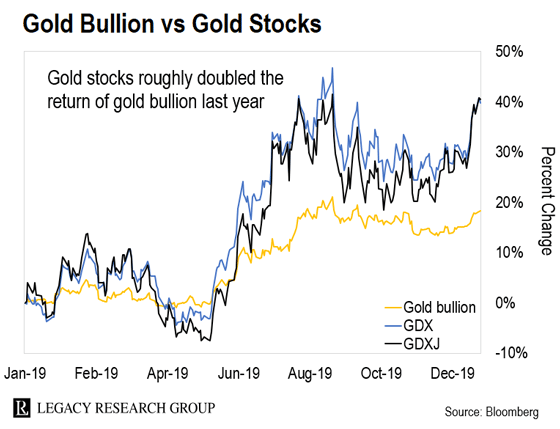 As I’ve been showing you, gold stocks are leveraged to the price of gold. And last year, we saw that leverage in action.

And he closed a position in Canadian gold miner Atlantic Gold (AGB.V) for a 215% gain.

It was bought out by Australian mining firm St Barbara. And Dave’s readers had the chance to profit from the sale.

But the largest gain was at our Early Stage Trader advisory…

Our tech expert, Jeff Brown, is at the helm. His mission is to help readers profit from explosive early-stage tech stocks.

And even though Early Stage Trader has been around only five and a half months, he’s already delivering on that promise.

Better still… his readers didn’t have to hang around long to earn that return. Jeff added this stock to the model portfolio on October 29. He sent a sell alert on December 9.

And that wasn’t the only Hall of Fame win for Jeff’s readers last year.

At The Near Future Report, he focuses on bigger, better-known tech stocks. But despite being among some of the biggest and best-financed companies in the world, these stocks can be rocket ships.

In December, Jeff closed out a two-year position in chipmaker Advanced Micro Devices (AMD) for a 278% gain.

Kudos if you acted on one of these Hall of Fame wins… or any of the other 12 triple-digit winners our team closed out in 2019.

But we’re not resting on our laurels. We’re already gearing up for Teeka’s first – and potentially most lucrative – live event of 2020.

And during the event, Teeka will reveal the No. 1 wealth-building opportunity of 2020.

I can’t reveal too much here. But I can say that, for the first time ever, you’ll have the chance to get in on a pre-IPO (initial public offering) deal with a billionaire, before it lists on the Nasdaq.

Teeka’s billionaire contact is a legend in private equity. Insiders compare him to Richard Branson and Bill Gates.

But here’s the thing… There is limited space for the billionaire’s pre-IPO deal. This deal closes forever this month.

So my advice is register for Teeka’s event now to avoid disappointment. Sign up, for free, here.