Inflation is top of our minds these days.

It’s top of your minds, too, judging by the feedback we’ve been getting.

It’s also increasingly on the minds of the general public.

As you can see from the chart below, Americans are Googling “inflation” the most since at least 2004. 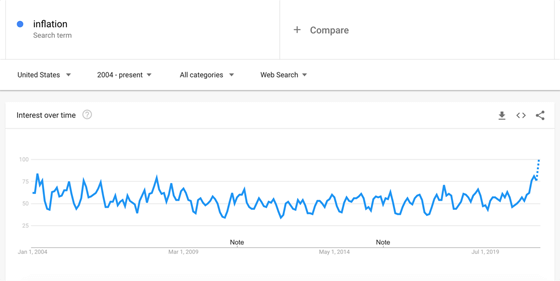 As I (Chris Lowe) wrote to you about in Wednesday’s dispatch, commodities prices are soaring.

And the commodities sector overall, as measured by the Bloomberg Commodity Index, is up 52% over that time. 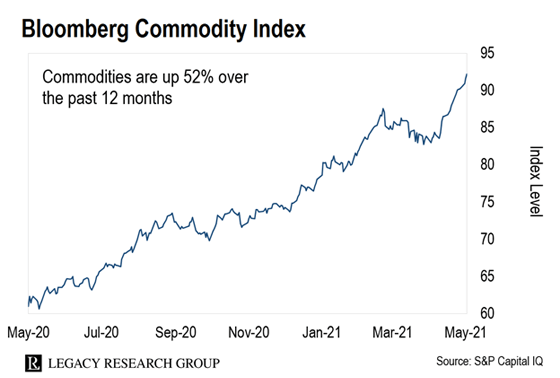 Meanwhile, as we covered yesterday, there are unprecedented levels of stimulus flowing in the economy – on both the fiscal (government-spending) and monetary (central bank) sides.

It’s a disturbing outlook. But it’s not a hopeless one. This is something you can act on now… before it’s too late.

So for today’s mailbag edition, we’ll take another look at the top strategies our experts have for not only surviving, but also thriving, in an inflation.

As I’ve been showing you, inflation happens when there’s an abundance of currency relative to what it can buy.

The way to beat it is to buy stores of value that are scarce. These could be gold, silver, or other commodities. They could be art and collectibles. They could also be real estate, including productive farmland.

Commodities are expensive to get out of the ground. And there’s only so much of them on Earth. Art can’t be easily reproduced. Nor can farmland.

Here at the Cut, we group bitcoin with these scarce assets.

Like gold and other physical commodities, its issuance is bound up in an expensive “mining” process. And there’s a hard cap of 21 million bitcoins.

This stands in contrast to the U.S. dollar, the euro, and the yen… along with all other government-issued currencies.

Central banks can emit the currencies they control at will – with nothing more than a few strokes of a computer keyboard.

But one reader wants to know where else to look for inflation-busting investments.

Standing by with answers are our globetrotting gold investor, Tom Dyson… and our commodities investing expert, Dave Forest.

I mean assets that will increase in value and income production at or above the rate of inflation. I’d be interested in owning something like that. We know inflation is on the horizon. Practical steps and timing to prepare for it would be interesting.

Tom’s response: It’s a great question, Robin. It’s something I’ve been thinking about a lot over the past few years.

As you may know, I’ve been warning my readers that the international monetary system is broken.

The U.S. has too much debt. There is no way of rebalancing the economy without inflation and a major devaluation of the U.S. dollar. This makes the debt burden more manageable.

My go-to protection from the madness that’s coming is gold. But lately, I’ve been looking for a way to diversify from gold – without moving away from my core insight that keeping as far away as possible from the financial system will protect me from what the future holds.

And shipping stocks fit the bill. I’m talking about stocks in companies that move goods and commodities across the world’s seas and oceans.

Shipping is a great business to protect your wealth from inflation and dollar devaluation, because ships are hard assets. They’re made of steel.

As inflation pushes up the costs of commodities – including steel – ships become more expensive to make. You also get more for selling them for scrap. That puts a floor under the asset values of shipping companies.

It suits my general view of trying to get out of the U.S. dollar – and doing it via something that’s very cheap, has been hated for a long time, and generates a lot of cash flow.

This is not something vulnerable to becoming obsolete, like electric vehicles replacing taxis. There is no substitute for shipping heavy materials across the ocean.

Technology cannot make the shipping business redundant. It’s here to stay. That gives me a lot of confidence.

My paid-up Tom’s Portfolio readers can find my shipping stock recommendations here. You can also find out how to subscribe here. But if you’re not a subscriber, a good place to start your search is Scorpio Tankers (NYSE: STNG). It focuses on delivering products from refineries to railcars, trucks, and pipelines.

Its share price has soared 122% since its low last October. But I see more gains ahead as folks wake up to fact that inflation is coming.

Dave’s response: Thanks for your question, Robin.

I’m a fan of blue-chip gas-pipeline stocks as a way to protect against inflation and earn an income stream in the process.

Once these pipelines are in place, these businesses are opening checks other companies send them for allowing them to use their pipelines to transport natural gas.

Someone puts the gas in one end of the pipe. Someone takes it out at the other. The gas-pipeline operator gets money in the middle.

Right now, these companies are paying dividend yields of between 6% and 10%.

Where can you get that kind of income these days?

Even if drilling for natural gas stopped… we’ve got enough coming out of existing wells for years to come.

So why wouldn’t you take a 10% payout? And you’ll probably make more as natural gas prices rise and shares in pipeline stocks go up as well.

Corporate America is waking up to the inflation threat, too.

Companies such as Nasdaq-listed software maker MicroStrategy (MSTR) and electric carmaker Tesla (TSLA) are converting billions of dollars of cash reserves to bitcoin because of its scarcity value.

We got a great question about this, which I sent on to Dan Denning.

He cowrites The Bonner-Denning Letter with Legacy cofounder Bill Bonner.

At the Cut, we write a lot about big moneymaking opportunities, such as crypto, bleeding-edge tech stocks, legal cannabis stocks, and pre-IPO (initial public offering) deals.

What Dan and Bill do is different. Think of them as lookouts high up in the crow’s nest on a ship. Their primary mission is to help their readers preserve their wealth from dangers on the horizon that others overlook or ignore.

Which brings us to our last question today, for Dan…

Reader question: Is there any currency now that’s backed by gold, silver, or something else tangible and valuable?

If the entire planet is using fiat currency, isn’t the whole world going down the same path as the good ole USA?

Aren’t we all going to see what’s at the bottom of the rabbit hole?

Dan’s response: It’s a great question, Leo. Sadly, the answer is no. There hasn’t been a gold-backed currency system since President Nixon took the dollar off gold in 1971… and effectively took the world off gold at the same time.

Other reserve assets are special drawing rights (SDRs), which are the reserve assets the International Monetary Fund (IMF) issues, and foreign currencies such as the Japanese yen, the Swiss franc, the euro, and the British pound.

If you believe there’s gold in Fort Knox and at the Federal Reserve Bank of New York… then that, at some level, also backs the dollar.

What’s interesting to me is foreign central banks are loading up on gold.

In 2018, Hungary added 28.4 tonnes of the yellow metal to its official reserves. It was one of the world’s largest central bank buyers that year.

Why are these two countries loading up on gold? Maybe to hedge against their own exit from the euro… or a collapse of the shared currency?

The European Central Bank (ECB) is Europe’s equivalent of the Fed. It charges its member banks a negative rate on the accounts they have with it.

These banks then pass on this cost to their customers, which is the whole point of the ECB’s negative-interest-rate policy.

Commerzbank is one of Germany’s biggest banks. Since last year, it’s been forcing its customers to pay a 0.5% annual rate to keep large sums of money with it.

You couldn’t make this stuff up. I doubt it’s popular with voters. And maybe politicians in Hungary and Poland intuit that better than their other European counterparts.

That’s all for this week. Have a great weekend.