If you’re like us, you’re starting to think about the opportunities… and risks… ahead.

Our team of analysts here at Legacy Research is doing the same. Over the following weeks, I’ll share with you where Teeka Tiwari, Jeff Brown, Dave Forest, Nick Giambruno, Jason Bodner, and the rest of the team see the biggest opportunities in the new year.

But to round out the year, we’re taking a look back on the highlights from 2020.

It was a banner year for the model portfolios we publish. The wins spanned stocks… commodities… cryptocurrencies… and pre-IPO deals.

These wins have given our subscribers the chance to substantially improve their financial situations. And that’s one of our top priorities as a business.

That’s not us being selfless. As our cofounder Bill Bonner points out, we thrive when you and your fellow readers thrive. It’s a win-win relationship.

But before I (Chris Lowe) get into the biggest wins in the model portfolios, a quick recap of the year we’ve just been through.

To call 2020 a wild year is an understatement…

Take a look for yourself. 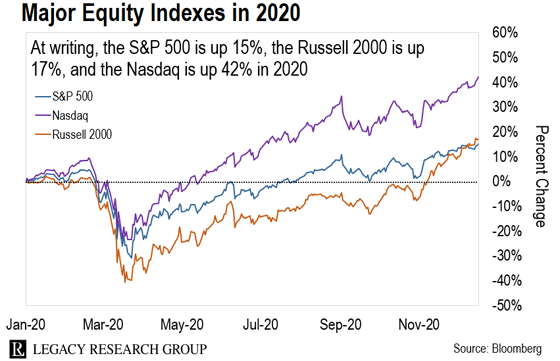 As the year began, the coronavirus was already spreading across the globe. By February, stock market investors were unable to ignore its economic impact.

It was the quickest fall into a bear market (defined as a 20% or more fall from a peak) in history.

But the recovery that followed was the fastest ever.

These gains mean outsized returns if you were able to hang on and avoid panic selling, as we advised in these pages back in March – at the beginning of the U.S.’ nationwide lockdowns.

But our Palm Beach Trader subscribers are doing even better.

Regular readers will know he was one of the few guys on Wall Street authorized to put together trades of $1 billion – and up – on behalf of wealthy clients.

When he quit Wall Street, he developed his own trading system. It’s based on what he learned over his more than 20 years on the Street.

First, it sorts the top stocks based on profits, sales, and balance-sheet strength. Then, it alerts Jason when big-money investors are piling into those stocks… before the rest of Wall Street finds out.

As Jason’s paid-up subscribers know well, this can lead to triple-digit price spikes in these stocks.

These picks helped the model portfolio earn an average return of 40% in 2020.

That’s more than double the return of the S&P 500.

At this writing, it’s the best-performing stock pick at Legacy in 2020. And it’s in a brand-new industry – psychedelic medicine.

When Nick Giambruno introduced our Crisis Investing readers to this emerging industry, only the savviest insiders knew about it.

As he explained here, evidence shows that psychedelics can help treat depression, anxiety, addiction, and PTSD.

When Nick discovered that, he recognized that momentum was building and that a new profit trend was emerging.

Billionaire investors such as Peter Thiel and Steve Cohen were starting to get involved. And U.S. cities were considering decriminalizing psilocybin, the psychedelic compound found in “magic mushrooms.”

In March, Nick added a tiny psychedelic medicine stock called Mind Medicine (MMEDF) to the Crisis Investing model portfolio as the best way to profit from this trend. It’s rocketed higher since then…

Readers who acted on Nick’s recommendation were able to close their positions for a 1,282% return.

And the momentum behind this trend is still just picking up…

Since Nick’s recommendation, more big-name investors, such as Kevin O’Leary of Shark Tank fame, have pledged funds toward growing the industry.

And on Election Day, Oregon voted to become the first state to legalize psilocybin for therapeutic use.

This is a major catalyst. Lawmakers in California and Washington have now said they’ll put legalization on their states’ ballots.

Don’t worry if you haven’t gotten in on this trend yet. Nick says we’re still in its earliest days. Here he is with more:

Today, investing in psilocybin is on only the savviest investors’ radars. The psilocybin industry is still in its nascent stages, and legalization still has a long way to go before it reaches critical mass… But there lies the opportunity.

So look out for more on this emerging trend next year in these pages.

One asset class far outearned most stocks this year…

Big T began the year by showing how two factors would align to propel crypto prices higher. As he put it on the first day of 2020…

The first driver is a dramatic drop in incoming supply caused by the bitcoin halving event. (As you may recall, the halving is when the bitcoin reward is cut in half. The first was in 2012 and the second was in 2016. The third will occur in May 2020.)

The second driver will be a surge in brand-new, massive demand for bitcoin and crypto assets. This demand will come from new crypto financial products created by Wall Street.

He hit the nail on the head with both predictions.

As he predicted, bitcoin (BTC) has rocketed higher since the most recent halving on May 11. 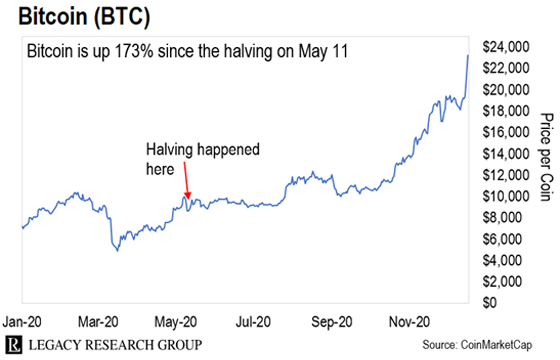 It’s not just bitcoin that’s been on a roll this year. So-called altcoins – crypto assets outside of bitcoin – have also had a stellar year.

The top 10 altcoins by market cap have outperformed even bitcoin. They’re up an average 241% this year.

And that pales in comparison with the altcoins Teeka recommended to paid-up subscribers of our Palm Beach Confidential advisory.

A look at the top gainers shows they’ve more than doubled the return of the average altcoin this year. Aragon (ANT), the top gainer, climbed 700%.

At writing, the average gain of the 67 open recommendations in the model portfolio is 487%.

Folks who follow along with all of Teeka’s recommendations have had the chance to almost triple the value of their crypto portfolios – in a single year.

Kudos if you acted on the recommendations I’ve highlighted today.

Gains like these make me proud to be part of the Legacy team. Because we’re delivering on our promise to help you meaningfully grow your wealth based on ideas outside the mainstream.

And these weren’t the only big winners in the model portfolios we publish here at Legacy.

Tomorrow, I’ll cover a wide range of tech wins, the metals that power them, and gold miners’ banner year.