Coronavirus has slipped across Europe’s borders…

I (Chris) am writing to you from Ireland. And I can tell you there’s a growing panic about the spread of the deadly virus this side of the Atlantic.

That’s mainly due to an outbreak in northern Italy. So far, it’s killed seven people and infected more than 200 others.

Following the news, European investors have hit the panic button. Stocks in London, Paris, Rome, and Madrid plunged by between 3.3% and 5.4%.

But if you bought gold on my advice at the start of the outbreak… you’ve protected your wealth.

In the January 27 Daily Cut, I urged you have plenty of gold in your portfolio to shield your wealth from any fallout from the virus outbreak. Since then, gold’s up 5%.

And as I’ll show you today, gold’s surge isn’t just a flash in the pan. That’s why, if you haven’t already, now is the time to take action and buy.

It’s of the price of gold bullion going back 12 months. 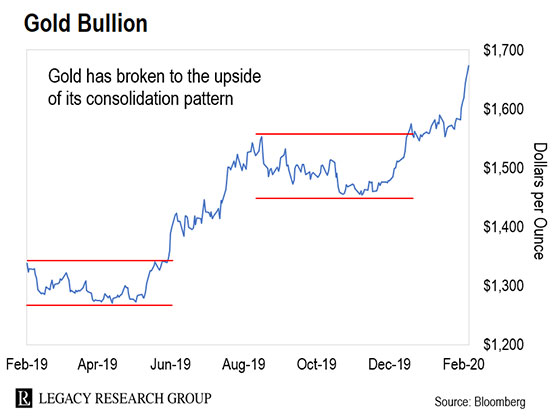 As you can see, gold has broken out to the upside of its trading range.

The news out of Italy is troubling…

As I mentioned up top, the government in Rome says the virus has killed seven Italians and infected more than 200 others.

And the government has locked down at least 11 towns… closed schools in major cities… and canceled soccer games… to try to contain it.

It even canceled the Venice Carnival. It’s the celebration that’s world-famous for its elaborate masks. But this year, the only masks people were wearing in Venice were surgical masks to keep the virus out.

There have been major outbreaks in South Korea and Iran, too…

In South Korea, there have been eight confirmed deaths and 833 additional confirmed cases.

In Iran, there have been 12 confirmed deaths and 49 additional confirmed cases.

The mortality rate from the virus in the Iran outbreak appears to be much higher than in China.

This suggests the Chinese feds were lying about the mortality rate in China. Or there are hundreds or thousands of still-undiscovered cases of infection in Iran.

Neither is good news. And it’s leading to fears that we’re on the edge of a global coronavirus pandemic.

As I showed you in last Wednesday’s dispatch, what gold investors are responding to is the monetary madness they see coming.

China’s central bank already has negative interest rates after you account for inflation. And it’s already been flooding stimulus into the system.

In addition to cutting loan rates, it’s made 357 billion yuan available in a targeted loan program for small and medium-sized businesses. It’s also fixed the yuan to a weaker level.

But at a meeting last Friday, Chinese Communist Party officials pledged to be more “proactive” in deficit spending and to show “more flexibility” in monetary easing.

And that wasn’t the only hint that more stimulus is on the way.

China isn’t the only country in stimulus mode…

After you account for inflation, interest rates are negative in the 19 eurozone countries.

That means it’s free to borrow once you take inflation into account.

Same goes for the U.S.

And traders see the Fed pushing rates even lower from here. CME Group figures reveal that traders see a roughly 90% chance of at least one rate cut by June. That’s risen from a 20% chance a month ago.

We still don’t know how the coronavirus outbreak will end…

But we do know there is now a real chance it will tip over into a global pandemic.

And judging by the rise in gold and the fall in stocks last week, investors are starting to price in that possibility.

That doesn’t mean it’s time to panic sell your stocks. But as we’ve been showing you, it does mean now is a time to play defense as well as offense in your portfolio.

We’ll continue to keep a close eye on this fast-moving story here at the Cut. So make sure to tune in later this week for more.

Meantime, if you haven’t already, now is the time to buy some gold. I’ve been a broken record on this since we launched this newsletter to all paid-up Legacy subscribers back in August 2018.

But I believe it’s more critical now than ever… especially if the spread of coronavirus continues.

How far could gold climb from here?

As one of our go-to experts on the gold market, E.B. Tucker, told us, he sees gold topping the $1,900 mark before the end of the year.

And Postcards From the Fringe editor Tom Dyson believes gold could even pierce the $10,000-an-ounce mark in the not-too-distant future as global money debasement picks up steam.

On a final note, kudos to master trader Jeff Clark…

On February 5, he recommended his Delta Report subscribers buy put options on one of the big technology exchange-traded funds, the Technology Select Sector Fund (XLK).

In other words, he recommended his readers take a speculative “side bet” that the tech sector – and XLK – would fall.

Today, he recommended his readers sell those put options for about $5.

That’s a 137% gain in under a month… which is exactly what Jeff’s readers signed up for.

So kudos to Jeff… and congratulations if you’re a Delta Report subscriber who acted on this trade recommendation.