In this week’s mailbag, Teeka Tiwari answers a burning question on a lot of readers’ minds…

And what does the affair mean for the bitcoin mass adoption megatrend he’s been spreading the word on?

First, an update on the recent surge in crypto market volatility… 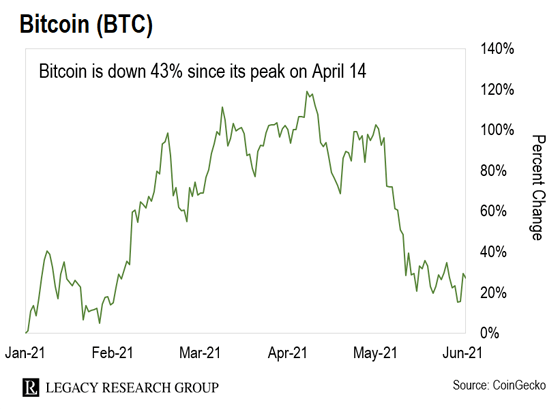 This kind of volatility can be scary. And nobody likes to see their portfolio get roiled.

But as colleague and world-renowned crypto investor Teeka Tiwari told subscribers of our crypto-focused advisory, Palm Beach Confidential, in a recent video update, volatility is nothing to fear…

Volatility is the price we pay for life-changing gains in crypto.

Since then, we’ve had a flood of feedback from Teeka’s subscribers, thanking him for his reassuring video updates…

The videos make me relax about the crypto situation. It’s good to see your passion for us subscribers to do well. I’m so happy, I never earned so much money in my life.

I want to say thank you for all the table banging and intestinal fortitude. I trust your judgement implicitly. You are making a difference in my life. I look forward to the next couple of years.

I really appreciate Teeka’s advice to hold and trust in the research, for putting out a video, and always keeping it real. It continues to give me reassurance and confidence. And it really helps me tune out the noise in the mainstream media.

Teeka’s video came at the right time, when blood was in the street. I knew I had to hold it, but having Teeka’s message is very reassuring and comforting.

Bitcoin has hardly been out of the headlines in recent weeks…

I’ve shown you how El Salvador’s adoption of bitcoin as legal tender is a game-changer.

And we explored how Elon Musk tanked bitcoin to gain favor with the government.

But the story that caught your imagination concerns the $4.4 million in ransom money Colonial Pipeline paid to hackers after they encrypted its data and caused it to shut down its 5,500-mile refined fuel pipeline that feeds the East Coast.

The company paid the ransom money in bitcoin. And according to some press reports, the FBI had hacked a private bitcoin wallet to recover the money.

But Teeka says what actually happened was very different…

Reader question: I’m sure I’m not the only one a little concerned that the government can pull money from a wallet as they did with the pipeline hackers. I’m hoping Teeka will comment on this soon.

Teeka’s response: Thanks for getting in touch, Stephen.

To recap for folks who may have missed the story… the Colonial Pipeline is responsible for shipping about 45% of the fuel across the Eastern seaboard of the U.S. It got hacked recently. And the CEO paid a ransom in bitcoin.

And it was just announced the FBI had “hacked the wallet and had recovered most of the money that was sitting in that particular wallet.”

This had people asking themselves, “Has bitcoin been hacked? Do the feds have a way to get our private keys?” And folks who don’t really understand how bitcoin works have been freaking out.

Well, I can tell you unequivocally: The bitcoin network was not hacked. Now, I want you to think about this logically. Do you think if the federal government had the ability to crack encryption of this level that they’d tip their hand to the world and their global enemies for a paltry $2.3 million?

There is absolutely no way.

What they did was rely on the stupidity of these cybercriminals. They had rented a cloud server that was based in Northern California. The feds tracked it down and filed a warrant to seize the property. And this led them to the information they needed to access the bitcoins. 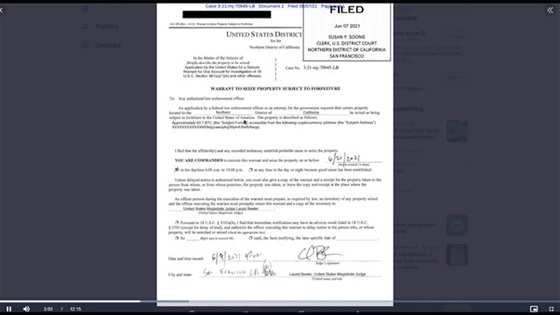 So please, if you are losing any type of peace of mind over this, don’t. I have said again and again: You have to be a special kind of dumb to use bitcoin to commit a crime.

Imagine kidnapping somebody and asking for ransom in U.S. dollar bills that have tiny microchips in them. Then imagine these microchips allow you to track every dollar from the moment they’re in your hands for the rest of their lifetime in the economy.

That’s what taking a ransom in a blockchain coin is like. The FBI can trace the bitcoins Colonial Pipeline sent to the criminals’ wallet. And even if the criminals send them to other wallets to try to hide their trail, specialist FBI agents can follow them on the blockchain network, which is open for all to see.

And if you’re dumb enough to put your private keys to those wallets on a server physically located in the U.S., where the federal government can get a warrant and seize it… I mean, it’s just a special kind of stupid to do something like that.

Again, you may hear this anti-bitcoin rhetoric come out about how hackers are using it for ransomware and how you need to have all these special controls on it. But let me tell you what government agencies won’t tell you in public…

They love bitcoin. And they love it when criminals are stupid enough to use it because it makes their jobs so much easier.

It is so much easier to track somebody engaged in nefarious activities using bitcoin than it is with physical cash. Period. End of discussion.

Sticking with the theme of bitcoin’s security, a reader wants to know if quantum computing threatens the security of blockchains…

Reader question: Will the advent of quantum computing compromise the security of bitcoin wallets, or will they be protected by advanced encryption?

Standing by with an answer is our tech expert and former Silicon Valley insider, Jeff Brown.

He’s best known for his tech stock recommendations. But he’s also an expert in the new field of digital assets.

Jeff has been advising lawmakers on Capitol Hill about digital currencies as part of his work with the Chamber of Digital Commerce.

And he’s given readers of our Near Future Report tech investing advisory the chance to make 258% on bitcoin and 453% on Ethereum (ETH) since he added them to the model portfolio in November 2017.

Jeff’s response: Hi, Ewan. Thanks for writing in.

But could a 256-qubit quantum computer “crack” bitcoin?

The answer is yes, assuming that the bitcoin blockchain is in its current state. A quantum computer could pose a threat to most blockchain technology… and pretty much any form of encrypted data.

But there is one important thing to remember about blockchain technology. It’s software. And like all software, it can be upgraded.

There are blockchain technology companies working on solutions to make blockchains quantum-resistant or quantum-proof.

There’s even one blockchain project called Quantum Resistant Ledger that has developed a blockchain from the ground up to be quantum-resistant.

And as I wrote about last August, the National Institute of Standards and Technology (NIST) is a branch of the U.S. Department of Commerce. Its mission is to promote innovation and industrial competitiveness in the U.S. And in 2016, it launched a competition for the development of quantum-proof cryptography. The target completion date was 2022.

Sixty-nine cybersecurity teams entered the competition. NIST went through each team’s proposed system and narrowed the field to 15 teams.

So the industry hasn’t been sitting on the sidelines. After all, if quantum computers pose a threat to bitcoin, they also threaten the encryption that protects our governments, our military, corporations, and e-commerce websites.

That’s why I’m keeping a close eye on cybersecurity firms that are well-positioned for the shift to quantum computing, which will happen over the next couple of years.

To wrap up today’s mailbag, we turn to Legacy cofounder Bill Bonner.

Bill has acknowledged that bitcoin could be a better form of money even than gold. But he believes speculation is rife right now in crypto.

Here’s Bill in his Diary, two weeks ago…

Cryptocurrencies are never real “investments.” There is no product or service rendered… and no earnings […]

But which one will win the race?

At least at the racetrack, you take a fair guess. Each horse has a birth certificate… a sire, a dam… And each has a record. How fast did it run the last time? Was the track muddy or dry? Who’s the jockey? And, of course, what odds are the bookies giving?

But bitcoin is a bastard nag… its anonymous founder Satoshi Nakamoto denies paternity. And none of the others has ever run around the full track… from boom to bust.

We’ll just have to wait to see which ones cross the finish line!

I always enjoy Bill’s thoughts and even his misguided thoughts on bitcoin. I’m a late bloomer on bitcoin, and a boomer.

Once Bill has done sufficient research into bitcoin, he’ll stop conflating bitcoin with cryptos. There is only one bitcoin, and there will only ever be one bitcoin. I considered myself to be very knowledgeable about the flaws in our monetary system before I bought bitcoin.

But I would admit that until I studied bitcoin, I didn’t truly understand money. Bitcoin is like having money that operates in five dimensions and can do things that the U.S. dollar and other fiat currencies can’t do.

Bill will learn… eventually. Bitcoin is insurance against Fed and government stupidity – something that Bill writes so eloquently about.

There is a lot of hype out there, as far as hustling bitcoin goes. With an open field for just about anyone to come up with a cryptocurrency, what serious investor thinks any single crypto is better than another?

China mines 65% of the bitcoins, yet will not sanction transactions done with bitcoin. Hello? Who would seriously accept bitcoin as collateral?

In April I could buy two $30,000 cars with one bitcoin. A few weeks later, only one. That’s 100% price inflation. No bitcoin owner in her right mind would buy anything with the stuff until it settles way down in volatility.

Back in my first career as a journalist on various community newspapers in the Midwest, one of our cardinal rules for validating a story was “Consider the source.”

That rule firmly embedded itself in my mind for life. I’ll consider a serious discussion of bitcoin – just as soon as someone can tell me the true identity of its inventor.