It’s as though Nikola Tesla got split in two…

Tesla was the Serbian-American inventor who did pioneering work with electricity.

In 1888, Tesla shot to fame after patenting the world’s first alternating-current electric motor.

It’s valued at $187 billion. That makes it the world’s most valuable automaker.

But as you may have read about in the news, there’s a new EV maker on the block. And it’s pitching itself as Tesla’s alter ego.

It’s called Nikola (NKLA). It went public on June 4. And its shares have rocketed 87% higher since then. 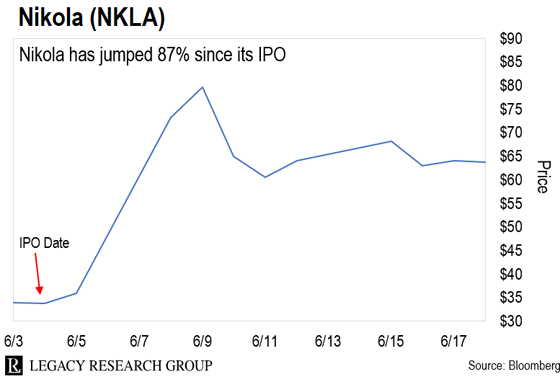 After this surge, Nikola is now worth $23 billion. That’s more than legacy automakers with sales north of $100 billion, such as Nissan and Fiat Chrysler.

And it was briefly worth more than Ford, which did $150 billion in sales last year.

But as you’ll see today, although many investors are betting big on Nikola’s success… buying shares at today’s prices is a fast track to losing money.

You see, Nikola has yet to produce a single car or truck…

As regular Cut readers know, one of the big profit themes we track for you is the electric vehicle revolution. And we’re big fans of Tesla. 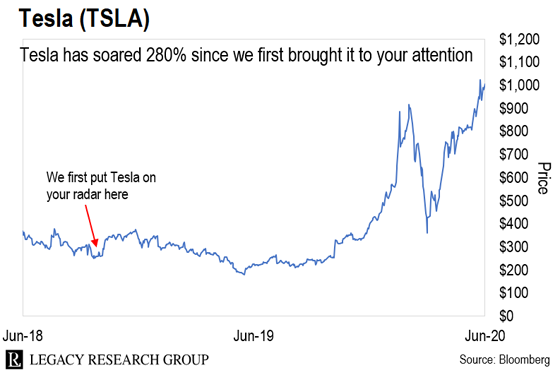 Tesla has sales north of $24 billion. Over the last year, it made profits of $840 million.

Nikola hasn’t made a red cent.

Its billionaire CEO, Trevor Milton, claims to have 14,000 reservations for Nikola vehicles. And he says that’s worth $10 billion in sales.

But that value is purely theoretical. Nikola is still months away from delivering its first product.

And there’s a more fundamental reason to worry about Nikola’s share price.

Nikola plans to build its Nikola One semi based on hydrogen as a fuel source. 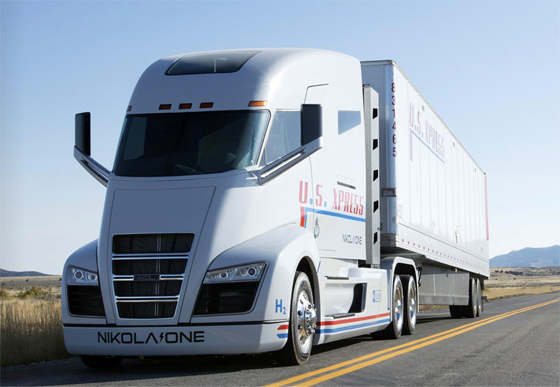 Nikola plans for its Nikola One semi to run on hydrogen power.
Source: Nikola Motor Company

That’s a big mistake, according to our tech expert, Jeff Brown.

Jeff is a Silicon Valley insider with more than 25 years’ experience in high-tech companies… including in the automotive sector, working on semiconductors for use in cars at NXP Semiconductors. And he believes hydrogen as a fuel source has major flaws.

Here he is with more on that…

Hydrogen is clean energy. It doesn’t have any emissions. It also has more “energy density” than a typical lithium-ion EV battery. You can get more energy per unit of hydrogen than you can from lithium-ion batteries.

But there’s a problem. These vehicles aren’t economical. And the hydrogen refueling infrastructure is limited.

Today’s hydrogen vehicles use hydrogen fuel cells. These need to be filled with pure hydrogen at a filling station. But it is extremely pricey to make pure hydrogen.

Figures from the National Renewable Energy Laboratory show it costs $4.50 to make a kilogram of hydrogen. Jeff again…

With hydrogen, we would see fuel prices well above $5 per kilogram.

Compare that with an average of $2.60 per gallon of gas in 2019 – it’s roughly double. And if we use fossil fuels to make the hydrogen, we end up using more carbon than if we had just stuck to normal gasoline. Clearly, hydrogen isn’t competitive.

That’s not the only problem Jeff sees with Nikola.

AI – or artificial intelligence – is software that learns. It’s an essential ingredient for self-driving cars.

And that’s critical. Because the kind of car or truck that will dominate the roads in the future will have no human drivers. Instead, AI pilots will drive it.

And as Jeff likes to remind his readers, Tesla doesn’t just make slick electric cars. It’s also one of the world’s most advanced AI companies.

Teslas have driven in fully autonomous mode a total of 3.3 billion miles. That’s more than any other company. It’s 165 times more than its nearest competitor, Google-owned Waymo. Jeff again…

Investors are putting an aggressive forward valuation on Nikola. They’re treating it as though it was technology company like Tesla. But in this case, the market has gotten way ahead of itself.

Nikola doesn’t have the advanced AI tech Tesla has. It’s more of a traditional EV maker. It would be impossible for me to recommend a company like Nikola trading at these levels. It would be a quick way to lose a lot of money.

Although he believes it’s a much better value proposition than its alter ego, Nikola, Tesla’s too richly valued right now. It’s currently trading just above $1,000.

So although Jeff is a Tesla bull… and although he strongly recommended the company back when it was trading around $300… he does not recommend buying Tesla at these levels.

Instead, Tesla stock should be at the top of your shopping list… for the next time it has a pullback.

I’ll have more for you on that as this story unfolds. The 2020s will be a decade with dramatic changes for the automobile. And Jeff expects Tesla will stay streaks ahead of the competition.