If you look at the chart, it’s an unmistakable V-shaped recovery… 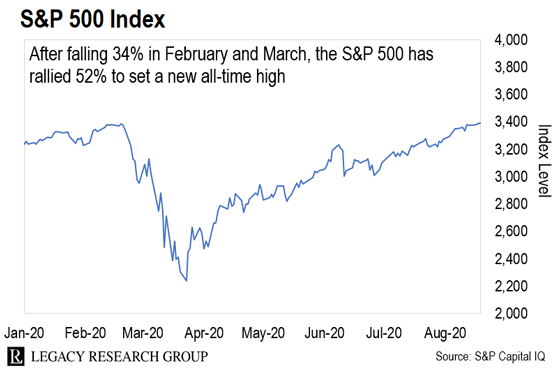 But what I (Chris Lowe) want you to understand today is you’re not looking at just a stock chart.

It teaches that the most important talent an investor can have is being able to sit still and do nothing.

This year, sitting still and doing nothing during the crash meant the difference between suffering a 34% loss… and making back all of those losses.

That fear can be paralyzing.

But as I’ll show you today, history gives us a blueprint for what comes next. And it shows there’s potential for plenty more upside ahead in the stock market.

First, kudos if you resisted the urge to panic sell…

Our mission at The Daily Cut is to make sure you never miss a big call from Jeff Brown, Dave Forest, Nick Giambruno, Jason Bodner, and the rest of the Legacy Research team.

And in our March 17 dispatch, we pleaded with you to stay rational and resist the urge to panic.

It was all down to expert insight from colleague Teeka Tiwari.

Teeka – or Big T, as his readers call him – is best known as a crypto investor. That’s only natural. Some of the biggest gains he’s handed his readers have been in crypto. 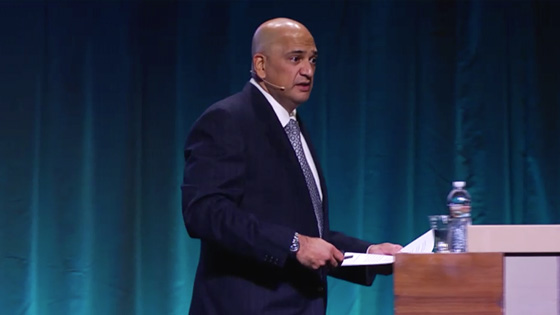 Teeka presenting at an industry conference

But Teeka cut his teeth as a stock market pro on Wall Street.

He was the youngest-ever vice president at Wall Street firm Shearson Lehman. He also ran his own hedge fund.

And in March, when the world seemed to be crashing down around investors’ heads… and the fattest bear market in history was hammering stocks… he urged calm.

If you’re a long-term investor, you can see that time repairs all stock market wounds.

So I implore you to leave your long-term investments alone. If you try to get “smart” with your long-term money, you’ll fritter away your capital. And you’ll likely cause yourself an extra five to seven years of work just to recoup your losses.

Teeka remembers the last crash… and the rally that followed. And he showed why this year’s crash was another buying opportunity for contrarian investors…

Remember the lessons of 2007-09. Please do not make long-term decisions based on short-term facts. And the fact is, while the economic and human fallouts from the coronavirus are very serious… they are temporary.

If you’re looking to buy into this market weakness, my favorite long-term exchange-traded fund (ETF) is the Vanguard Total Stock Market ETF (VTI).

I hope you tuned in. And I hope you acted on Teeka’s recommendation to buy when others were selling.

It’s not too late to profit…

Don’t get me wrong… There’s still plenty of bad news out there.

And the virus has infected about 5 million more in the U.S.

Meanwhile, dozens of iconic American companies have been left penniless.

We also just saw the worst plunge in the U.S. economy in history – and that includes the Great Depression… World War II… and the oil shock and stagflation of the 1970s.

That’s in addition to the worst race riots since the 1960s… and a political system that looks like it may pull itself apart at any moment.

Please hear me when I tell you that I do not make light of any of this.

But also hear me when I tell you that all this bad news doesn’t mean the stock market is going to respond how you think it will.

Let’s return to that “blueprint” I mentioned up top…

You can say all you want about the reasons stocks shouldn’t go higher.

Falling corporate earnings and sales, for one.

Analysts expect finalized S&P 500 earnings to show a plunge of 34% in the March-to-June quarter. And they expect sales revenue to drop by 10%.

Then there’s the drumbeat of bad news… and negative headlines that emphasize the uncertainty of the future.

But that’s no different from 2008 and 2009. If you’re over a certain age, you’ll remember it well. Those were dark days filled with uncertainty, too.

Wall Street investment bank Lehman Brothers had hit the wall… nearly 3 million Americans had defaulted on their mortgage payments… about 9 million had lost their jobs… and there were justified fears of a total meltdown of the global credit system.

This next chart tracks that recovery next to the one we’ve seen since this year’s low for the S&P 500, set on March 23.

The likeness is startling…

It also backs the bulls’ case. As you can see, at this point in the recovery a decade ago, there was still a long way for stocks to climb.

That doesn’t mean you bet the farm…

There’s nothing stopping stocks from rising, as history shows us. But that doesn’t mean stocks are cheap right now.

One way to determine that is to look at the Shiller price-to-earnings (P/E) ratio.

It’s named after Nobel Prize-winning Yale economist Robert Shiller. It looks at “smoothed” earnings over the past 10 years, adjusted for inflation, versus stock prices.

This helps account for year-to-year swings in earnings to give a more stable picture of value. 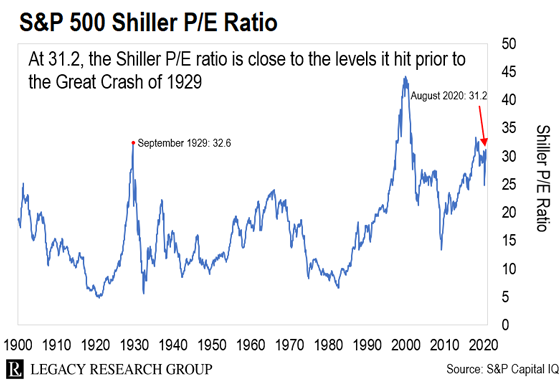 And you want to load up on stocks when they’re cheap… not expensive.

That’s why following a sensible asset allocation plan is key…

Longtime readers know I write about this a lot. But it’s critical to your long-term wealth.

Studies show that your asset allocation – not the stocks you pick – accounts for more than 90% of returns over the long run.

Instead of having it all in stocks, or bonds, or cash, or real estate, or precious metals, or crypto, or speculations… you divide it up.

Everyone will have their own take on exactly how much goes into each bucket. But here’s how Teeka and his chief analyst, Grant Wasylik, do it over at our flagship Palm Beach Letter advisory. 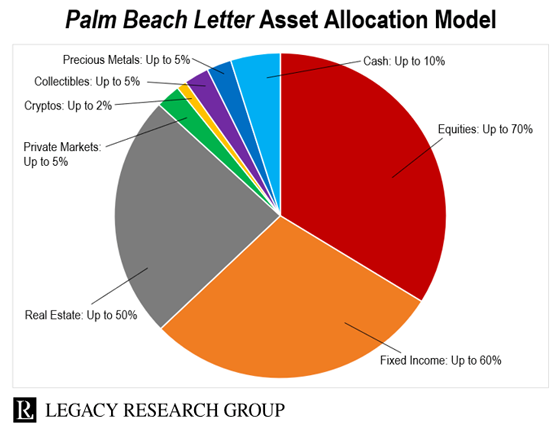 You can see that Teeka and Grant recommend putting no more than 70% of your wealth in stocks (aka equities)… and smaller percentages in bonds (fixed income), real estate, private markets, crypto, precious metals, collectibles, and cash.

Sharp-eyed readers will spot that the allocations don’t add up to 100%. That’s because how you split your wealth exactly is up to you.

But by following these guidelines, you’ll never have to worry about falling stocks… or crypto… or precious metals… or real estate wiping you out.

Spreading your wealth over different markets takes care of that risk.

And you’ll be much better equipped psychologically to ride out market crashes when they happen. (And they will happen.)

As Teeka says, diversification will generate long-term outperformance of the market and shield your portfolio – even during the toughest times.

So I urge you to make sure you have an asset allocation model at the core of your wealth-building strategy. If you do, you’ll be prepared for wherever the market goes next.

And if you’re sitting on the sidelines… and you’re scared to get back into stocks… just think about what happened in the last crash.

Doing what scared you… and buying when fear levels were still high… was the profitable thing to do.