That puts it on track for its best month since 1976.

That’s the year I (Chris Lowe) was born. So, this has been the best month for the Dow in my lifetime.

What’s got investors so excited about stocks again? And does it mean the end of the bear market?

These are the questions on the table today…

It’s a problem-solving principle William of Ockham, an English Franciscan friar, developed in the 14th century.

He showed that, when you have competing answers to a question, the simplest one is usually right.

The same goes for why investors started buying stocks hand over fist at the start of the month.

If stocks get cheap enough, this draws in value-minded buyers… who bid up prices. 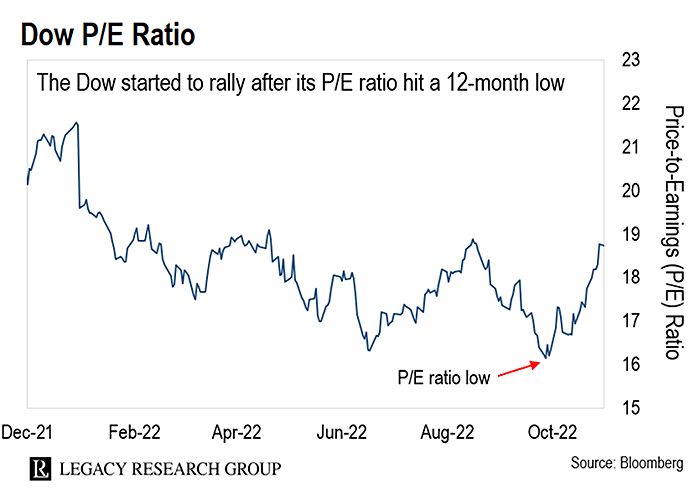 Said another way, you had to spend $21.50 for each dollar of earnings its companies produced.

And that 25% drop in valuations has drawn in buyers.

After dropping interest rates to the floor during the Covid-19 pandemic, the Fed started to raise rates again in March.

And it’s bad news for stocks…

Higher rates raise the amount of income you can earn, with less risk, in the bond market. So money leaves stocks and goes into bonds.

And investors have been looking for a pivot from the Fed on interest rates as a sign to jump back into stocks.

Another three-quarter-point rate hike is locked when the Fed wraps up its November rate-setting meeting this week.

But last Thursday, the market-implied odds of a hike this size at the Fed’s December meeting slipped to 38% from 75% a week ago.

Traders also pulled back on expectations for how high rates could go next year.

She’s given talks on how to fix the banking system at the Federal Reserve, the International Monetary Fund, and the World Bank.

She’s also written several books – including her latest, Permanent Distortion – about how central banks have distorted the global economy beyond recognition.

Here at Legacy, Nomi heads up The Distortion Report. It’s all about the opportunities to profit as central banks continue to gush stimulus into markets and the economy.

And for months, she’s been predicting the Fed would begin to dial back on its aggressive rate hikes before the end of the year.

Nomi says the Fed’s pivot will come in three phases…

She laid it all out in a video update she sent to her readers in August, after the Fed’s annual conference in Jackson Hole, Wyoming. As she put it…

The markets in general are going to continue to struggle to figure out whether the Fed is incompetent, dangerous, or both. But I still firmly believe the Fed will have to pivot… It’s going to go through three stages of that pivot.

The first is going to be a reduction in the size of rate hikes. The second will be a pause in rate hikes. The third will be rate cuts, when it becomes blatantly obvious that the Fed is killing the economy.

The week before last, the Wall Street Journal ran the headline, “Fed Set to Raise Rates by 0.75 Point and Debate Size of Future Hikes.”

I was curious about it. So I got on the phone with one of my contacts in the media. And I learned that, for its past two meetings, the Fed has been alerting the Wall Street Journal and The New York Times two weeks in advance of its rate moves.

This tells me the Fed is signaling the initial stages of its pivot to the media. And, by extension, to the big banks and the market.

We already have a precedent for this from across the Atlantic. Last month, a crisis engulfed the British pound. And the Bank of England became the first major central bank to pivot to “restore market functioning.”

So, why would the Fed start easing off on rate hikes?

One reason to be optimistic is the better news on inflation…

We hear a lot about how broken supply chains and rising energy costs push up inflation.

But inflation tends to get really nasty when wages start spiraling to keep up with rising costs.

It’s what economists call a wage-cost spiral. And it terrifies Fed chairman Jay Powell and other central bankers.

In a wage-cost spiral, rising prices cause workers to demand higher wages. This leads to higher costs for goods and services. Workers also have more spending power, which further pushes up prices.

And on Friday, we got news that the government measure of wages and benefits is peaking.

It’s called the Employment Cost Index. And it rose just 1.2% in the third quarter.

That’s lower than the 1.3% jump in the second quarter.

And we’re seeing a sharp fall in money supply growth.

In September, the U.S. money supply shrunk by $129 billion. That’s the largest monthly fall since 1959.

And it’s part of a downward trend in money supply growth that’s been in place since the start of the year.

Inflation is caused by too much money chasing goods and services. Less money sloshing around the economy means less inflation.

If Nomi is right, we’re in the late innings of the bear market…

And she’s been encouraging her readers to take advantage of this setup by easing into stocks again.

Here she is with more on that…

History shows that buying quality stocks at bargain prices is the best way to build lasting wealth as an investor. And that’s what you should do now.

Don’t invest a large amount in one go. Instead, invest smaller amounts over time. This is what we called “legging in” when I worked on Wall Street. It’s also known as dollar-cost averaging.

You decide on a dollar amount you’re going to invest every week. It could be as little as $50. Then invest that amount in your favorite stocks every week… no matter what the market does.

This allows you to take advantage of the discounts on offer. But you’re not betting the farm. There’s still going to be a lot of chop in the market, as investors try to figure out the Fed’s next moves. So, you need to be extra careful about managing risk.

That’s it for today.

As Nomi cautions, we’re not out of the woods yet. But there are growing reasons for optimism.

So, keep an eye out for more from me this week on how to position yourself for the next bull market.