2022 keeps getting gloomier for us as investors…

After weeks of heavy selling pressure, the tech-heavy Nasdaq is down 27% from its all-time high in November of last year.

That’s a bear market, which we commonly define as a 20% or more drop from a peak.

Meanwhile, the broader S&P 500 is down 16% since its all-time high at the start of the year.

And those losses are mild compared to the plunges in biotech stocks.

These companies are experiencing what our tech expert, Jeff Brown, calls “Biotech Winter.”

Here’s what’s happened to the SPDR S&P Biotech ETF (XBI). It tracks some of the leading biotech stocks: 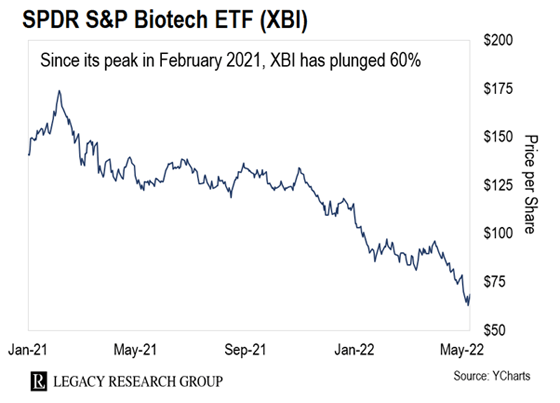 And biotech isn’t the only sector feeling pain. This week, we’ve seen a bloodbath in the crypto market.

Over the past five days, the granddaddy of cryptos, bitcoin (BTC), plunged 14%.

This has to do with the crash in U.S. dollar stablecoin TerraUSD (UST).

Without getting into the weeds, algorithmic buying and selling was supposed to keep UST pegged to the dollar.

In other words, one UST was supposed to always equal one U.S. dollar.

At this writing, one UST is worth just 11 cents.

This has triggered the near wipe-out of Terra (LUNA). It’s the crypto asset associated with the blockchain project that issued UST. (Palm Beach Crypto Income subscribers can go here for a full update.)

This is all absolutely gut-wrenching.

But if you’ve been following along in these pages, it won’t come as a huge surprise.

As I (Chris Lowe) hammer on all the time, tech stocks, biotech stocks, crypto, and other speculative assets offer the chance at life-changing gains. But they often come with massive volatility like we’re seeing this week.

But given the ferocity of the recent plunges in crypto, let’s begin our mailbag with one Teeka Tiwari reader who’s worried about what the future holds…

Reader question: What’s going on in the crypto market? This doesn’t feel like normal crypto volatility. It feels like another crypto winter, one with a LOT more downside to go.

My portfolio is already down 70% from its all-time high in 2021. With the current market momentum, I’ll be down at least 95% before the bleeding stops.

Teeka’s response: As I’ve always said to my readers, you’ve got to be prepared for massive volatility as a crypto investor.

There’s no way to be in this asset class and successfully sidestep every jag of volatility that hits the market.

The crypto market is ugly right now. And I’m not sure it’s done being ugly…

Things have gotten so bad, folks are wondering if we’ll go through another Crypto Winter bear market.

From the end of 2017 through December 2018, bitcoin plummeted more than 80%. And the world’s second most valuable crypto asset, Ethereum (ETH), plunged 90%.

But as I showed my readers earlier this year, it’s unlikely we’ll see price falls that extreme this time around.

During Crypto Winter, many of the use cases for these blockchain projects were still theoretical.

A lot of these theoretical use cases only started to become real at the end of 2019 and early 2020. That’s when commerce began across these digital platforms.

That’s also when institutional started allocating tens of billions of dollars to them. And there are many more of these types of investors in the crypto market now than there were back then.

And that’s a big change…

Because the folks involved now have much deeper pockets. They’re longer-term thinkers. And they’re not afraid of volatility. Instead, they’ve learned to embrace it.

Volatility is always there to some degree. You can’t remove it from the market. In fact, if there was no volatility, you wouldn’t make money over the long term. Cryptos would be just like cash or money market funds. They wouldn’t go down by much… but they wouldn’t go up either.

That’s why I try to ignore the day-to-day volatility and focus instead on where crypto adoption is headed over the long run. That’s what determines where the long-term value of this asset is going.

That’s why I’m still bullish, despite the recent price falls.

At that point, I’ll recommend my readers take some profits. Until then, my strong recommendation is to hold on. Selling now just doesn’t make any sense.

I know it’s difficult to watch the crypto market drop like this. But it’s the price to pay for the life-changing gains that await investors who stay the course.

Next, we shine the spotlight on master trader Jeff Clark.

He’s also an expert at harvesting profits from bear markets.

Now, one of his readers wants to know if he can count on gold and silver to offset some of the losses in stocks as they slip into a bear market.

Reader question: Can we still consider gold and silver as hedges in bear markets in stocks, like in 2020?

This no longer seems to be the case for the large group of new young investors in the stock market. What are your thoughts?

Jeff’s response: I don’t think gold is a hedge in a bear market.

The last time we had a big dip in stocks was in March 2020 during the pandemic-induced crash. And gold got pummelled – just like everything else. Same thing at the start of the 2008 crash.

But gold tends to bottom before stocks do.

After the 2008 crash, gold and gold mining stocks bottomed about six months before the rest of the market did.

In March 2020, everything was falling, including gold. But gold and gold mining stocks bottomed about two weeks before everything else did.

That makes them a good barometer for the broader stock market.

If gold has bottomed, you can feel a little bit more comfortable about the stock market bottoming shortly after.

If you’d like to hear more of Jeff’s market insights, on Wednesday, he launched a new trading advisory. It aims to help traders profit from big reversions in stocks. You can catch up on that right here.

We’ll wrap up with a question for the newest analyst on the Legacy team, Nomi Prins.

Twenty years ago, Nomi quit a seven-figure job at Goldman Sachs (GS). Since then, she’s been on a mission to help ordinary investors profit using the knowledge and insights she learned on Wall Street.

She’s an expert on how central banks affect the economy and markets.

And she’s a best-selling author. She’s written two books that expose the influence central bankers have over our lives – All the President’s Bankers and Collusion: How Central Bankers Rigged the World.

That’s made her an expert on how the international fiat money system works. And one of her readers has a question about whether China is a threat to the U.S. dollar’s status as a global reserve currency.

Reader question: This country has made China the economic mogul it is now by outsourcing virtually all our manufacturers’ needs. And China has been trying to undermine the U.S. dollar for many years now.

China is a real threat to us. If it succeeds, this country will never be the same. It will stoop and perhaps never rise again. I pray their goal never comes to fruition for the U.S.’ sake.

Nomi’s response: Hi, Deleta. You’re right. China has been angling to take the world’s preeminent superpower title away from the U.S.

China is already an important superpower, of course. It has a population of more than 1.4 billion and a government that rules with an iron fist.

One way China has been raising its prominence in the world is by cultivating trade relationships around the world that don’t rely on the U.S. dollar.

Trade relationships are as much about the currencies they take place in as they are about geopolitics. For instance, China and Russia have established currency relationships between their respective banks.

This allows the two countries to make payments to each other for goods and services without using the U.S. dollar, as is the norm.

China is Russia’s biggest trading partner. In 2021, total trade between the two countries hit nearly $150 billion. About $25 billion of that was conducted in the Chinese currency, the yuan.

That said, trade with Russia accounts for just 2% of China’s total trade volume. If significantly more trade happens without the dollar being involved, its influence will wane.

But we’re a long way from that. So the U.S. dollar will be top dog for a while longer.

That’s all we have time for this week.

If you have a question for Teeka, Jeff, Nomi, or any of the other experts we feature here at the Cut, write us at [email protected].