That’s the word that leapt into my mind.

Those are insane returns. Especially when you consider the holding times involved. Nick recommended the first of these stocks a little under three and a half years ago.

He recommended the second in March of this year – just nine months ago.

Based off of their average annual returns, you’d have had to wait at least 25 years for these kinds of returns as an investor in the S&P 500 or the Dow.

What’s the special sauce behind these gains?

They were plays related to a market megatrend we’ve been tracking for you – the wave of cannabis legalization sweeping the world.

It shows how investing in a megatrend early on… and waiting for the crowd to latch on… puts potentially life-changing profits within reach.

It’s been a standout year for our Crisis Investing readers…

And Nick has been doing just that…

A Casey Free Ride is when you sell enough of a stock you own that’s gone up a lot to get back your original stake. Then you let the rest “ride” for free.

These call options were up 224% since Nick recommended them in August 2019.

And by the time he recommended closing the position, readers who followed his advice were up 421%.

Last Thursday, he blew the doors off again.

He recommended closing out a 400% gain on call options on the iShares MSCI South Korea ETF (EWY).

Nick added them to the model portfolio in September 2019 as a way to profit from a resurgent South Korean economy.

Now, those gains are spectacular… especially given the turbulent year we’ve just been through.

But they didn’t prepare me for the magnitude of the wins he recommended closing out in the profit alert he sent out yesterday.

Nick closed out not one, but two 10-baggers…

These are the Moby Dicks of the investing world. They’re rare and illusive creatures investors seek out obsessively but often fail to find.

Legendary Wall Street fund manager Peter Lynch coined the term in his bestseller One Up on Wall Street.

If you’ve been following the legal cannabis story… you’ll know that most of the easily investable cannabis companies are based in Canada.

And their primary listings are on Canadian stock exchanges.

But IIPR is a rare play on the U.S. cannabis market. This San Diego-based company finances and leases facilities to cannabis growers in the U.S.

A REIT allows investors to conveniently own real estate through the purchase of a stock. The company is based in the U.S., and its stock trades on the New York Stock Exchange, just like any other U.S. stock.

IIPR has a unique and compelling business model that takes advantage of the legal gray area surrounding the U.S. marijuana industry.

Not only did Nick like the company’s business model. It also paid out a dividend, which at the time was 1%. As he concluded…

I believe IIPR could turn into at least a 5-bagger on price appreciation alone and a 10-bagger when dividends are factored in.

Look what happened next…

It’s all in this chart of IIPR’s returns. This includes dividend income, which is now at 2.4% a year. 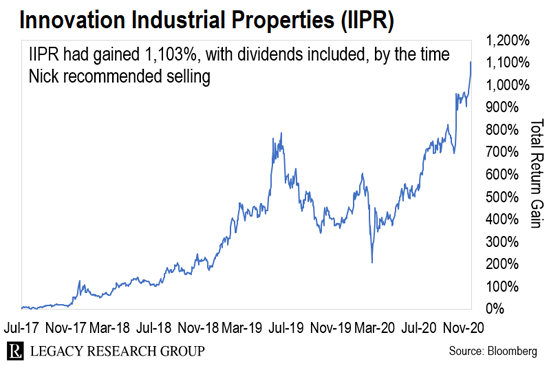 And readers who acted on his recommendation realized that gain in just over three years. That’s more than the 687% gain on bitcoin over the same time.

That would allow you to take the vacation of a lifetime… or put down a deposit on a home. It would also go a long way to paying for the kids’ college fund… or paying down a student loan.

And Nick didn’t stop there…

It was up 1,282% in the model portfolio when Nick sent out yesterday’s sell alert. As I mentioned above, Nick recommended this stock in March, just nine months ago. 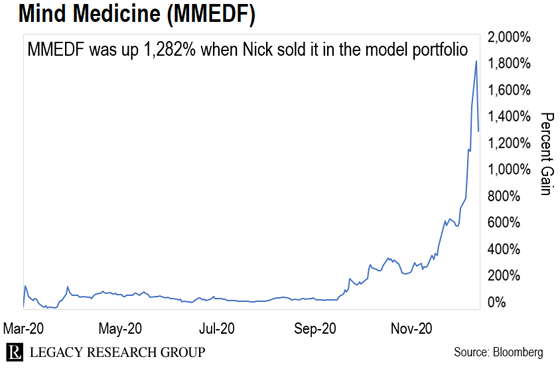 If you’re just joining us, you may be thinking, “What the heck is psychedelic medicine? How come it’s delivering these kinds of returns?”

As Nick explained in these pages last month…

Psychedelics are a class of drugs whose primary action is to trigger thought, visual, and auditory changes, and an altered state of consciousness. Major psychedelic drugs include mescaline, LSD, psilocybin (magic mushrooms), and DMT.

Humans have used these mind-altering substances for thousands of years.

Growing evidence suggests psychedelics can help treat depression, anxiety, addiction, and PTSD. But like with cannabis, the feds have driven them underground with harsh laws. Nick again…

It’s terrible enough for the politicians in Washington, D.C., to send young people into these ridiculous endless wars. But it’s truly beyond unconscionable to threaten veterans with arrest and imprisonment when they return with PTSD and seek lifesaving medicine.

Thankfully, the situation is changing rapidly. The legalization of psychedelic-based medicine is coming soon. It’s going to save countless lives. […]

The situation with psilocybin is reminiscent of cannabis around 2012, right around when the first states started legalizing recreational use. It gave birth to a global megatrend worth hundreds of billions of dollars and created fortunes for early investors.

Nick alerted his readers to this emerging trend early on. When he added MMEDF to the model portfolio, its shares were selling for just $0.41 each.

Kudos if you bought and sold when Nick recommended…

That sounds easy. But it’s not. Especially when it comes to when you sell.

Take it from paid-up Crisis Investing subscriber Daniel F. As he wrote in…

This, of course, is a learning experience, as my profit would have been $17,291 if I had just held my original shares. It’s nice to see in black and white, involving real money I invested, the lesson I learned, which is buy when you guys say to buy and sell when you say to sell – because you guys know how to let winners run and limit losses. Thank you for the gains and the lessons.

Daniel is right. Finding stocks that are headed higher is only one part of the investing process. But you profit only when you sell.

What determines whether you make life-changing gains is the ability to hold on and not let go along the way.

As I said, Nick has issued sell alerts for both stocks.

But if you’re looking for a broad play on the legal cannabis megatrend, consider the Horizons Marijuana Life Sciences ETF (HMLSF). It tracks 26 leading global cannabis stocks. That makes it an easy, “one-click” way to get exposure.

If you’re looking for higher profit potential, you can find out how to access Nick’s recommendations here.

And stay tuned for more in these pages on the legal cannabis… and the emerging psychedelic medicine… megatrends.