This time to wiping out cancer.

It’s an aggressive type of cancer that attacks the lymphatic system. About 3 in 10 people who get it die within five years.

These kill the cancer cells along with the healthy cells in our bodies.

But using the God Key, the folks at Caribou were able to target just the cancer cells… leaving the rest of the patients’ bodies unharmed.

The results were jaw-dropping.

And four of the five went into in complete remission.

This breakthrough could lead to the eradication of all forms of cancer.

So today, we’ll explore this God Key tech that’s revolutionizing medicine. Then we’ll look at how you can profit.

The “God Key” is how Jeff describes CRISPR gene editing…

Longtime readers will know all about it. Jeff has been writing about CRISPR at Legacy since 2016.

That’s a mouthful. But CRISPR is easy to understand conceptually.

It’s based on something bacteria have been doing for billions of years.

Bacteria keep track of viruses that attack them. Then they use molecular “scissors” to cut up those viruses if they attack again.

And as American biochemist Jennifer Doudna discovered 10 years ago, we can use those scissors to edit our genomes.

A genome is a person’s complete set of DNA. It’s what makes each of us unique. And mutations in our genomes cause at least 6,000 diseases.

These include multiple sclerosis, a disease of the brain and spinal cord… cystic fibrosis, which mostly affects the lungs… and Huntington’s disease, which attacks the nerve cells in the brain.

Although genetic disorders are relatively rare, one in five of us carries mutations that cause them.

That’s where the molecular scissors Doudna discovered come in. Jeff has more on that…

CRISPR allows us to “cut” out unhealthy segments of our genome… and “paste” in healthy segments. That’s why I call CRISPR the “God Key” – it gives us godlike control over our bodies.

It’s the biggest breakthrough since antibiotics. It can cure you before you even feel sick.

And CRISPR doesn’t help us fight just inherited diseases. It also helps us fight cancer and other diseases that don’t have a direct genetic link.

The God Key can give our immune systems superpowers…

One way researchers are doing that is through something called CAR (chimeric antigen receptor) T-cell therapy.

It’s what Caribou used in its trial on B-cell non-Hodgkin lymphoma sufferers.

T cells are central players in our immune systems that protect our bodies from disease. But cancer cells can evade T cells and render them ineffective.

That’s where the God Key comes in. Over to Jeff for more details…

First, clinicians remove T cells from a patient’s body. Then they use CRISPR to edit the T cells to identify and kill cancerous blood cells.

They then edit the T cells again to keep the body from rejecting them. They do a third edit to block something called the PD-1 receptor. It slows the immune system when it comes into contact with cancer cells.

Once clinicians make these three edits, they put the cells back into the patient through an injection.

This non-invasive therapy was all it took to send four of five non-Hodgkin lymphoma patients into remission.

But investors have been hating the biotech sector – including leading clinical-stage CRISPR companies such as Caribou. 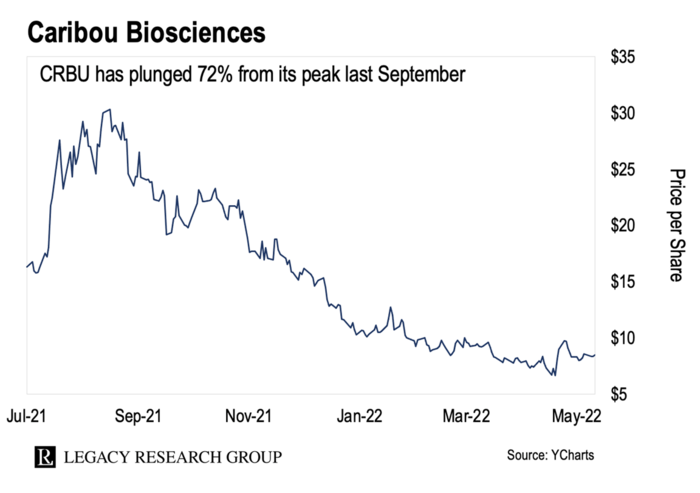 As you can see, Caribou’s share price is down 72% since it peaked last September.

The SPDR S&P Biotech ETF (XBI) is also reeling. It tracks a basket of U.S.-listed biotech stocks – including leading CRISPR stocks. And it’s down 60% since its peak last February.

We’re in what Jeff has been calling “Biotech Winter”…

You may recall the Crypto Winter bear market that raged between December 2017 and December 2018.

It took bitcoin (BTC) down as much as 83%. Smaller altcoins – cryptocurrencies other than bitcoin – fell as much as 90%.

It wasn’t the end of the crypto industry. But it was painful to go through as an investor.

Now, the Biotech Winter bear market has inflicted these kinds of losses on some of the world’s best biotech stocks.

Investor sentiment is so low right now, more than 25% of small biotech companies have market valuations less than the value of the cash on their books. That’s the highest percentage of biotech stocks trading below the value of their cash levels in 15 years.

In other words, investors are severely undervaluing these companies.

The biotech stocks he’s recommended at our Early Stage Trader advisory have sunk along with the rest of the sector. If you invested in these recommendations, it’s been tough to endure.

But Jeff remains extremely bullish on CRISPR companies and the biotech sector in general.

He was an angel investor in one of Caribou Biosciences’ early private funding rounds. And as he told his readers recently, he doesn’t plan to sell his shares anytime soon.

In fact, he sees the Biotech Winter as a great opportunity to buy shares in best-in-breed biotech companies. Back to Jeff…

The market still thinks CRISPR tech is a lab experiment… But multiple companies have already shown clinical evidence that the technology can cure diseases.

These types of negative valuations don’t last. So pick up cheap shares while you can… and you’ll be set to profit when the sector shoots up again.

That spells opportunity for contrarian investors…

If you’ve yet to invest in CRISPR and other biotech stocks, consider picking up shares in the SPDR S&P Biotech ETF (XBI).

This exchange-traded fund (ETF) tracks small- and micro-cap biotech companies as well as larger ones.

You can also look at the ARK Genomic Revolution ETF (ARKG). It’s an actively managed fund that focuses more on CRISPR stocks.

Buying into a sector that’s been hurting as badly as biotech isn’t easy. It takes guts to go against the crowd and buy when most investors are selling.

But as Jeff has been hammering on, it’s also how to make the biggest fortunes.

You can now buy into world-changing companies at bargain basement prices. And prices are so low already, the downside risk is relatively low too.