Chris’ note: Every four years, the supply of new bitcoin is cut in half. It’s called the halving. And after past halvings, colleague Teeka Tiwari has given his subscribers the chance at gains of up to 26,977%.

Now, he’s uncovered a new, halving-like event… with the potential to deliver even bigger gains. He’s calling it the “Super Halving.” And he’s hosting a free special event all about it tomorrow night.

As Teeka explains below, helping readers secure huge gains like this is part of why he’s been voted the most trusted man in crypto…

Over the past five years, I’ve delivered 10 crypto halving picks that have soared over 1,000%.

(More on those halvings in a moment.)

My crypto model portfolio has 68 open positions. 52 are winners.

These rare gains are one of the reasons I was voted crypto’s most trusted source among experts.

But I didn’t become the No. 1 crypto expert by sheer luck.

It took painstaking hard work. I had to build an entire network from scratch.

Today, I’ll tell you how I became the most trusted man in crypto… and how it has led me to one of the biggest discoveries I’ve ever made in this space.

In 2016, I attended the Consumer Electronics Show in Las Vegas. At the time, it had just one speaker talking about bitcoin (BTC).

He explained what bitcoin was… why it was valuable… and, more importantly, why its underlying blockchain technology would be so revolutionary.

As you may know, blockchain is the innovative tech behind bitcoin and other cryptos. It uses a public ledger to verify every transaction. And when I fully grasped the power of the blockchain, a lightbulb went off in my head. I knew I had seen the future.

So I immediately changed my travel plans, flew back to Florida, and told my publisher, “I’m writing about bitcoin.”

They thought I was nuts.

But I knew I had to become a cryptocurrency expert.

Back then, though, crypto was very insular. If you were an outsider, you couldn’t just walk into a meeting with developers or venture capitalists (VCs) and start asking questions.

Wall Street and the mainstream press weren’t covering crypto. You had to go to the events.

You had to get invited to private parties. You had to meet people in their homes, where they could talk more candidly about different projects. You had to be friends with all the crypto PR agents.

So, to break into this secret society of crypto experts, I reached out to people.

One of the first people I reached out to was a whiz kid named Vitalik Buterin. He’s a co-creator of Ethereum, the network behind ether (ETH). Lo and behold, he let me interview him. 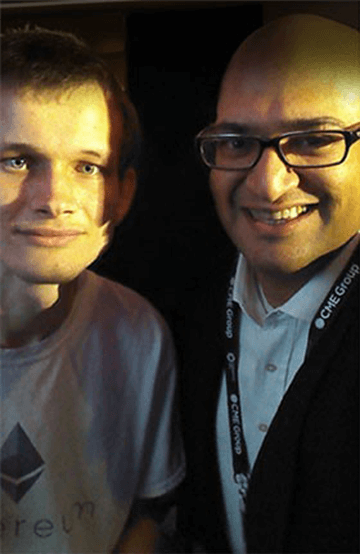 In April 2016, I became the first newsletter editor to do a full write-up on Vitalik.

After our interview, I asked him to introduce me to other people. And all of a sudden, I was meeting more big-name players in the space.

I met Charlie Shrem, one of the earliest bitcoin millionaires. And Roger Ver, an early bitcoin advocate formerly known as “Bitcoin Jesus.”

They led me to some of my first big crypto plays… including Vitalik’s Ethereum project.

Research From Beyond the Desk

But I didn’t stop there. I realized you don’t find life-changing recommendations like Ethereum sitting behind a desk.

You’ve got to get out and meet the people behind the projects… the real crypto experts.

And I don’t know the exact number of red-eye flights I’ve caught or sleepless nights of research I’ve done in a hotel in some faraway country… It’s been too many to count.

I’ve met crypto influencers at a 10th-century castle in Tuscany, Italy… spoken to billionaires about crypto at the World Economic Forum in Davos, Switzerland… and nearly got arrested for accidentally entering Belarus without a proper visa during a research trip to Minsk.

All of this to bring the best crypto ideas to my readers.

And after five years of international travel, kicking in doors, and building an elite network of crypto insiders… I’ve become the most trusted man among crypto experts.

I can get pretty much anybody on the phone or get a meeting with anyone I want. On top of that, I have a world-class team of crypto researchers and writers.

The Secret Crypto Event No One Is Telling You About

Friends, I don’t tell you all about myself to brag. I want you to understand that no one in the newsletter industry is more plugged into the crypto space than I am.

When I say something big is going down in crypto… I mean it.

Most importantly, I have the track record to back it up.

And just recently, I uncovered a “secret” halving-like event about to take place in bitcoin this year.

Most of you are probably saying, “Tiwari, you must be nuts. Bitcoin just had its last halving in 2020. And the next one isn’t until 2024. Bitcoin’s code allows halvings only every four years. There’s no way we’re having another this year…”

But in November 2020, I told an audience of more than 18,000 about five altcoins with similar halving-like events… And every one of the picks I recommended is up today.

Now I’ve discovered that some of the biggest names in crypto are positioning themselves for what I’m calling the “Super Halving.”

Hear me when I tell you this: It’ll be bigger than all the other halvings combined.

That’s why tomorrow at 8 p.m. ET, I’m holding a special event to explain exactly what this “Super Halving” is.

Friends, if you watch the news, you haven’t heard a word about this event… The mainstream financial media has no clue.

That’s because they’re not in the room with crypto founders like I am. They don’t have the phone numbers of dozens of the top crypto VCs on speed dial like I do.

They’re not meeting with developers. They’re not getting pitched to join the boards of blockchain startups…

They have no idea what’s really going on in this space.

But I do. And tomorrow night, I’ll reveal all during my free Super Halving Summit.

Or my altcoin halvings event last year, which delivered gains over 1,000%…

You have one last chance to profit from a lucrative “halving” like these.

During my event, I’ll also show you how to access the most exclusive opportunity I’ve ever shared. You’ll have the chance to access a set of investments I’ve never discussed with anyone before.

I’ve never published a word about them. I haven’t mentioned them in any of my research services… video updates… or articles.

So click here to reserve your spot at the Super Halving Summit.

And let me show you why I’ve been voted the most trusted man in crypto.