Fire up the whirlybirds!

If you’ve been glued to the mainstream media’s coverage of the coronavirus, you’ve likely missed an important story out of Hong Kong.

The Hong Kong authorities have decided to fight the economic slump there with a new type of “stimulus” – cash handouts.

Hong Kong permanent residents aged 18 and above will each receive a cash handout of HK$10,000 (US$1,200) in a HK$120 billion (US$15 billion) relief deal rolled out by the government to ease the burden on individuals and companies, while saving jobs.

How are they making these handouts?

This is known as “helicopter money”…

He claimed that a central bank could never run out of stimulus “ammo” to fight a crisis. It could simply dump $1,000 from a helicopter to inflate the money supply if it wanted to.

The Hong Kong feds are doing a digital money drop instead of raining banknotes from the sky. But the effect is the same – inflation.

As I hope to convince you today, it’s just the start of a flood of central bank stimulus that will send the price of inflation-fighting gold through the roof.

If you’re new to The Daily Cut, welcome aboard!

Our mission is to share with you the top moneymaking ideas from Bill Bonner, Doug Casey, Teeka Tiwari, Jeff Brown, E.B. Tucker, and the rest of the team here at Legacy Research.

One of the big ideas we’ve spilled the most digital ink on is the rise in the price of gold as a result of the global experiment in monetary manipulation central bankers are engaged in.

And as I showed you at the time, gold is a great way to protect yourself…

The supply of the dollar… the euro… and the yen is elastic. And central banks are doing everything they can to boost supply and chip away at currencies’ buying power.

This way, they hope to persuade us all to go out and splurge. If your money in the bank buys less each year, they reason, the more incentive you have to spend it now.

But the supply of gold is fixed. This makes it resistant to central bank manipulation. So owning it helps preserve your buying power.

Gold was trading at $1,510 an ounce when I wrote those words.

Gold currently trades at $1,648. That’s a 9.1% gain since my October recommendation.

And that wasn’t my first attempt to spur you into action to add gold to your portfolio.

The red arrows on the chart below point to just some of the times I urged you to buy gold. 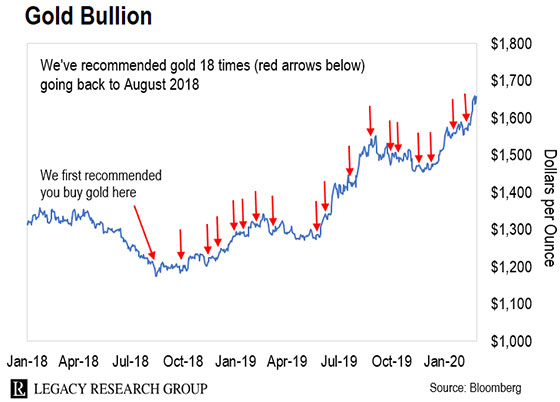 As you can see, there are a lot of red arrows on chart…

They go back to the launch of The Daily Cut to all Legacy Research readers in August 2018. (That’s when colleague E.B. Tucker called a bottom in the gold market.)

We’re aware that we’re in the minority here…

But as Legacy Research cofounder Bill Bonner has been warning, all the evidence and sensible theory is against that.

The likelihood a bunch of Ivy League PhDs will find exactly the prices that the economy needs is remote. The Soviets couldn’t do it. The Chinese couldn’t do it, either.

The reason is simple. No central authority has all the information it needs to perfectly plan an economy. Bill again…

That’s the beauty of a free-market economy. It doesn’t require quack economists who claim to be able to do impossible things.

A planned economy will work properly only if the planners know what the hell they are doing. A free-market economy can work well in total ignorance. Markets discover new prices every day. No one needs to know the answers in advance.

But the geniuses at the Fed deny it. They claim they can do what no mortal has ever done – impose their judgment on the markets and make the economy better than it would have been without them.

That insight is more important to understand now than ever before.

That’s because we’re entering into an even more dangerous phase of central bank “stimulus.”

First, they keep rates too low for too long. This pumps up stock market bubbles.

Second, they raise rates in a panic, causing investors to have a serious allergic reaction.

Then, they commit Mistake No. 3. They medicate stock markets with more low rates so they can reinflate the bubble.

But helicopter money is something different. It’s what Bill calls Mistake No. 4. And it’s a doozy. We’ll leave him with the final word on that…

The Fed will fire up the money helicopters. It will permanently emit money to promote purchases of goods and services by households.

What’s the best kind of gold to own to protect yourself?

One of our go-to experts on gold here at Legacy is E.B. Tucker.

E.B. used to comanage a fund that invested in gold mining stocks. And he refused to open an account for new clients until they first bought some physical gold.

Here’s the advice he’s been sharing with readers…

Before owning a gold stock, it’s wise to have some physical gold. That’s because gold is a tangible asset that you can hold in your hand. It’s real money, a safe-haven asset, and a way to protect your wealth. It’s survived every financial crisis and will continue to do so.

Then, you can speculate on higher gold prices by buying gold miners, which gives you the chance to multiply your money in a gold bull market.

You can look into an ETF [exchange-traded fund] like the VanEck Vectors Gold Miners ETF (GDX), which holds a basket of gold stocks.

For your physical gold, E.B. recommends you start with common (as opposed to rare) 1 oz gold coins.

That’s why E.B. asked one of the premier gold coin dealers in the U.S., Gainesville Coins, to create this page as a starting point for his paid-up Strategic Investor subscribers.

E.B. has kindly extended this special offer to Daily Cut readers. (We do not get any compensation from Gainesville Coins for bringing you this offer.)

A great coin to start with is the 1 oz American Gold Eagle listed on the Gainesville Coins page.