But after yesterday’s plunge, this bull market is on the ropes.

If you’ve been following the Cut, the end of the 10-year bull market in stocks will be a familiar theme.

In December, we passed on some recommendations to help you make sure your portfolio is prepared.

And since then, we’ve written to you several times reminding you to play defense in your portfolio with cash, gold, and even some bitcoin.

Still, you may be wondering what all the fuss is about.

That’s the biggest start to a year since 1997… during the dot-com bubble.

Then came yesterday’s plunge. It was the worst day for U.S. stocks this year.

But according to the perma bulls on cable news, any dip in stocks is a buying opportunity.

Context is everything, though…

And the context for this year’s rally is the steep plunge for stocks in the holiday quarter of last year.

Between September 20 and Christmas Eve, the S&P 500 plunged 20%. That’s the official definition of a bear market. 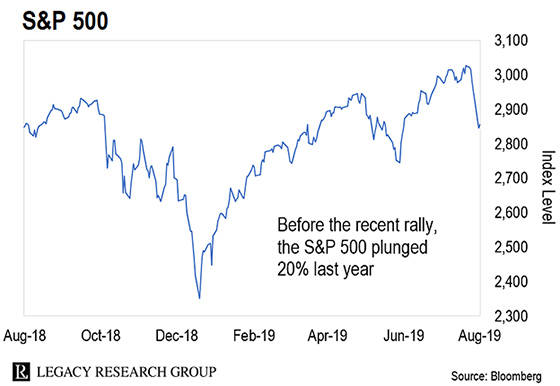 That should give you pause.

As you’ll learn in today’s dispatch, when violent rallies follow plunges like last year’s, it often means even steeper drops ahead.

As I (Chris) showed you in the March 7 Daily Cut, they suck unsuspecting investors back into shaky markets… just before they inflict maximum damage.

Here’s the chart I showed you. It tracks the two sharpest bear market rallies since the turn of the millennium… and the gut-wrenching plunges that followed. 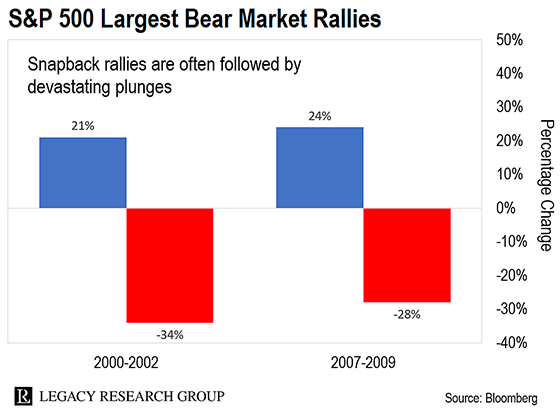 As I wrote at the time…

That led investors to believe that the worst was over. But the index plunged 28% over the next three months.

Now, you could bet “this time is different.” And maybe you’ll be right. Our crystal ball is as murky as everyone else’s.

But now is still a great time to make sure your wealth is protected… even if stocks continue to head higher over the near term.

You can’t count on the Fed fighting off the bear forever, either…

Sure, Fed chief Jerome Powell can take to the podium again. He can announce more interest rate cuts to try to keep the bull market going.

That’s what he did last Wednesday. The Fed cut the key lending rate for the economy for the first time since the dark days of 2008. And Powell said there’d be more on the way if needed. 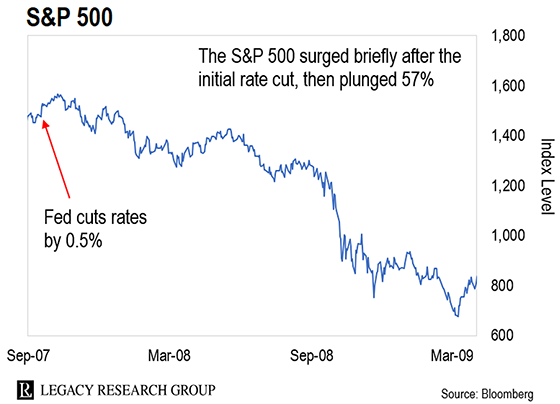 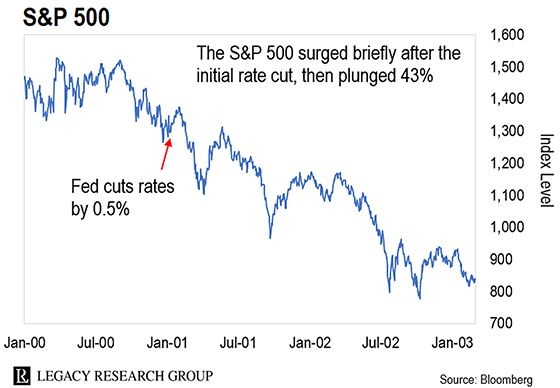 See the spikes in stocks after each of these Fed interventions?

That’s investors piling in… thinking the coast is clear.

All the Fed did was suck more investors into the market… right before stocks got cut in half.

And it’s not just stocks that are on shaky ground…

So is the economic boom on Main Street.

It’s now in its 121st month. That’s already the longest U.S. economic expansion on record. And it’s starting to gasp for breath.

That’s not something the market’s cheerleaders in Washington and the mass media want you to know.

But it’s something Legacy Research cofounder Bill Bonner and his right-hand man, Dan Denning, have been reminding readers over at The Bonner-Denning Letter.

Here’s Dan with some of the warning signs he sees in the U.S. economy right now…

I won’t bore your readers with how the yield curve predicts recessions. In a nutshell, long-term Treasury bond yields go down if investors expect the economy will slow. And the yield curve has inverted before every U.S. recession over the past 50 years.

And it’s not just the inverted yield curve that should worry you. Corporate execs see a recession ahead, too. Dan again…

Duke University recently completed its latest quarterly survey of 248 chief financial officers at U.S firms. These are the folks who are paid to worry about recessions and the effects they’ll have on sales.

If you think the stock market is in trouble now… what happens when investors wake up to the fact that a recession is around the corner?

Recessions and bear markets are the “terrible twins”…

They tend to happen together.

Since 1926, there have been eight bear markets. They’ve lasted between six months to nearly three years. And they’ve sent the S&P 500 plunging between 83% and 22%.

Of these eight bear markets, five coincided with economic recessions.

No one can know for sure if this year’s snapback rally is about to give way to a stock market plunge.

And there are some smart folks here at Legacy Research who think this bull market still has a ways to go.

What we do know from history is that violent plunges have followed snapback rallies in the past… catching investors off guard and wiping out their wealth.

We also know the time to prepare for a bear market is before it hits… not when it’s already cut your wealth in half.

That’s why, all week, we’ll be focusing on what you can do to prepare for a bear market. We’ll also show you how you can profit…

As you’ll find out, there are plenty of ways to make money when a bear market strikes – from buying precious metals, to betting on bonds, to using options to profit from rebound rallies.

Now is a good time to dust off our Ultimate Crisis Playbook if you haven’t already.

It’s 109 pages filled with advice on how to profit in a crisis – from guys like Doug Casey, Bill Bonner, Jeff Brown, Teeka Tiwari, and Jeff Clark.

You’ll learn about how owning gold and gold coins can protect your downside… how to profit from volatility using options… and how to shock-proof your portfolio.