Yesterday, the Federal Reserve slashed interest rates for the first time since 2008.

The 12 Fed board members who vote on interest rates determined that the U.S. economy, its stock market, and its capital structure could not survive if they left the economy’s key lending rate at 2.5%.

By adjusting this down to 2.25%, they say, we will have an economy and a stock market just like the porridge in the Goldilocks tale – not too hot and not too cold.

In yesterday’s dispatch, Legacy Research cofounder Bill Bonner put to bed a common myth… That a bunch of PhDs in Washington can figure out the best interest rate for the economy.

First, it keeps rates too low for too long and blows up an asset price bubble. Second, it raises rates to try to let some air out of the bubble, causing an allergic reaction on Wall Street.

That’s when it commits Mistake No. 3: It lowers rates again to keep the fake-money boom going.

That’s the phase of the cycle we’re in now. And it’s a dangerous place to be. Today, we’ll show you why… and what you can do about it.

It’s part of our mandate here at the Cut…

It’s our mission to spot market trends that still have massive growth potential. We also keep watch for crises, catastrophes, and collapses.

And we do that by plugging you into the latest insights from Bill, Doug Casey, Teeka Tiwari, Jeff Brown, Jeff Clark, and the rest of the Legacy Research team.

What are their latest big ideas? Where do they see opportunities to profit? What risks do they see on the horizon?

If you have any interest in making money over time in the markets, these are the big-picture questions you have to get right.

It clearly hasn’t been paying attention to history.

The last two times the Fed committed Mistake No. 3 (and cut rates after a hiking cycle) was ahead of the two most recent stock market crashes – the dot-com crash in 2000 and the 2008 crash.

Think back to September 2007. George W. Bush is finishing out his second term.

The S&P 500 is in a roaring bull market. Since the previous bear market bottomed five years earlier, it’s up 101%.

After having left rates too low for too long (Mistake No. 1), the Fed has been raising rates (Mistake No. 2) for the past three years or so.

Then the Fed reverses course.

On September 18, 2007… believing a rate cut is needed to stave off the effects of the mortgage meltdown… the Fed commits Mistake No. 3.

It cuts its key rate by half a point… 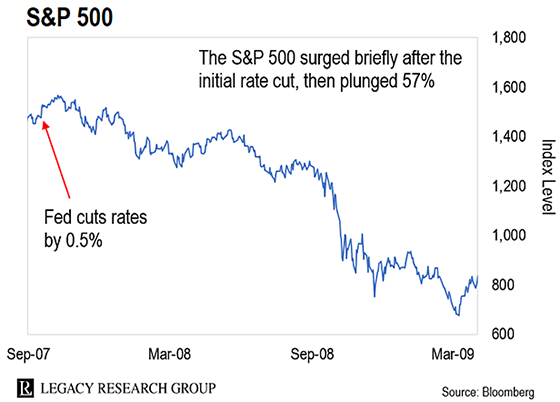 As you can see, stocks surge briefly after the rate cut. Twenty-one days later, the S&P 500 hits a new all-time high.

But the euphoria doesn’t last. Stocks then start to fall. And despite nine more rate cuts from the Fed, the S&P 500 loses 57% of its value before bottoming in March 2009.

The Fed did something similar before the dot-com crash…

The Fed has been in rate-hiking mode (Mistake No. 2) for the past two years, trying to deflate the dot-com bubble.

Citing “slowing growth,” the Fed cuts rates by half a point. 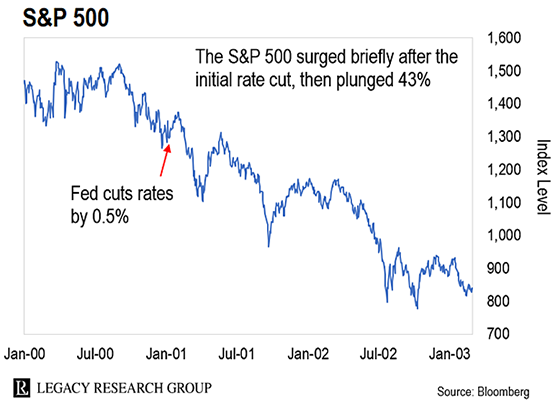 Stocks surge briefly after the announcement. Then the S&P 500 gets cut almost in half over the next two years.

We don’t tell you this to scare you…

It’s possible that a Fed U-turn on rates does the trick this time around.

And there are some smart folks on the Legacy team who believe we’re still in a long-term uptrend in stocks.

But we’re putting this story on your radar because the mainstream media is geared to be bullish. Mainstream outlets rely on advertiser dollars to pay the bills. Those advertisers don’t like to scare you with bear market or recession warnings.

Thankfully, we’re not in that position here at Legacy.

Our only loyalty is to you, our reader. That means sharing what you need to hear, not what corporate advertisers want you to hear.

So what should you do now?

First, know that rate cuts don’t necessarily mean the stock market and the economy are going to boom… despite what the talking heads on TV say.

In fact, the last two Wall Street crashes show the opposite is true.

And as Bill noted yesterday, since the 1960s, the Fed has cut rates 140 times. And those rate cuts didn’t stop the U.S. from going through 30 double-digit stock market plunges and eight recessions.

That doesn’t mean you should panic and pull your money out of the stock market. But it’s a good time to think carefully about how stocks fit into your overall portfolio.

Bill and his coauthor at The Bonner-Denning Letter, Dan Denning, recommend keeping just one-quarter of your investment portfolio in stocks.

They also recommend you keep a chunk of your wealth in cash and precious metals.

It’s up to you to determine what exact mix works for you. But these are great ways to protect your wealth from the kind of crashes we saw in 2000 and 2008.