The darkest hour is just before the dawn…

It’s something my grandmother, Doreen Weir, used to say to me as a kid.

I didn’t know it then… But she’d been shaped by some of the darkest hours of the 20th century.

Two hundred German Luftwaffe bombers flew over the city that night. Their targets were shipyards and factories. But visibility was poor. And instead, the Germans rained down high-explosive bombs on its most densely packed areas.

The attack left about 1,000 people dead. And it wounded thousands more. Apart from the raids on London, it was the greatest loss of life of any night raid during the Blitz.

Doreen was on the scene the next morning…

She was an NCO in the Auxiliary Territorial Service (“ATS”) at the time. It was the women’s regiment of British Army.

My grandmother in her ATS uniform

She helped clear the debris… and the bodies… after the raid. And for the survivors, she staunched wounds… tied tourniquets… and helped set smashed bones.

I often think how bleak the outlook must have seemed to her at the time.

She still had to endure two more brutal Luftwaffe raids on Belfast that May. And in April 1941, only Britain stood between Hitler and European domination.

But in June, Hitler launched an attack on the Soviet Union. Then in December, the Imperial Japanese Navy launched its surprise attack on Pearl Harbor. And the tide of war began to turn.

He was one of the world’s most successful fund managers. A $10,000 investment in his Templeton Growth Fund when he took over in 1954 would have been worth $2 million when he sold the fund in 1992.

And one of his insights was that bull markets are “born on pessimism, grown on skepticism, mature on optimism, and die on euphoria.”

So, he looked for what he called moments of “maximum pessimism.” He believed those moments signaled bear markets were slowing… and it was time to invest.

In 1939, on the eve of World War II, he spotted such a moment. Hitler was menacing Poland. And Britain and France had pledged to come to its aid.

Templeton bought $100 worth of every stock trading on the New York Stock Exchange selling for less than $1.

After an average holding period of four years, that portfolio returned 400%.

Where are we now in the cycle Templeton sketched out?

It’s been a brutal year no matter where you’ve put your money. Stocks, bonds, and crypto have all had a rough time.

So if you’re like most folks, you’re nursing losses… hunkering down… and feeling a sense of dread about the markets.

But look at this chart of the Dow… 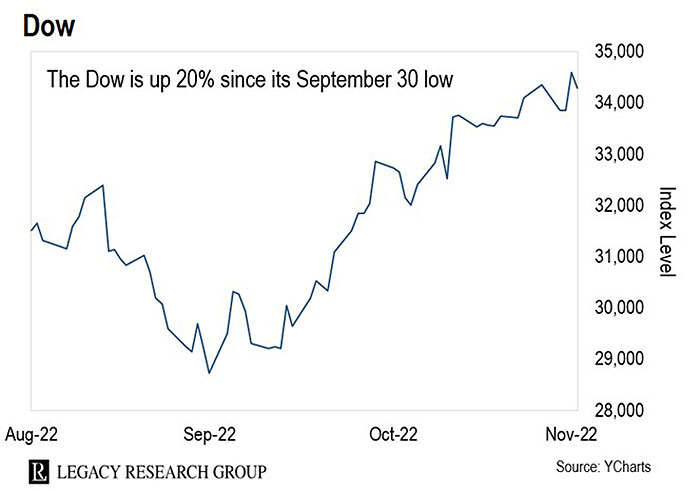 This index of 30 of America’s most renowned blue-chip stocks is up 20% since September 30, its low for the year.

That puts it back in bull market territory, which is defined as a 20% rise or more from a low.

That’s the largest two-month percentage gain for the Dow since July 1938… at the end of the Great Depression.

It’s up 14% from its recent low. That’s not officially a bull market… yet.

But yesterday, it closed above the trend-tracking indicator called the 200-day moving average.

Don’t be put off by the jargon.

All you need to know is that it’s a chart line that shows you what the average price was over the last 200 days. And many traders and investors think of it as a “line in the sand” between a bull and a bear trend.

If the S&P 500 is under this line, it’s in a bearish downtrend. If it’s above it, it’s in bullish uptrend. 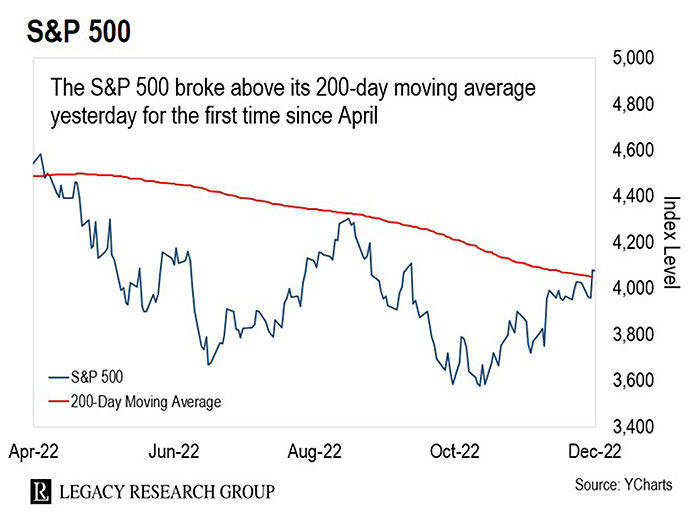 As you can see, the S&P 500 bumped into this trend line over the summer… but didn’t break above it.

Then yesterday, it broke above it for the first time since April.

If it can stay above this line, it signals a bullish trend ahead.

We’ve also had some bullish news on the economy…

Don’t get me wrong… There are still dark clouds overhead. But there are some rays of light, too.

And there are reasons to be optimistic that inflation will continue to slow.

The price of a barrel of U.S. crude oil is roughly the level it was at before Russia invaded Ukraine and send prices spiking.

And a national index of apartment rents fell 1% this month. That’s the sharpest month-over-month drop in rents since 2017… and the third straight month of declines.

And because rents are biggest single weighting in the CPI, they have the biggest impact on inflation.

We’ve also seen the end of backlogs at U.S. seaports. It’s a sign the supply chains are getting back to normal.

The Los Angeles and Long Beach backlogs in California that had climbed to a high of 109 vessels in January have fallen to zero.

That should further ease inflation as the supply of imported goods increases.

So, the Fed has signaled it could ease off on its rate hikes…

And he said, the Fed could scale back the pace of its interest rate hikes “as soon as December.”

That’s not set in stone. Powell has plenty of wiggle room if inflation starts to take off again. But it’s aligned with the prediction our resident “Fed watcher,” Nomi Prins, has made about the Fed’s pivot.

As she explained it to one reader in a mailbag issue of the Cut last month, it will come in three stages. Nomi…

First, it will slow the pace of its interest rate hikes – or at least reduce their magnitude. So instead of more three-quarter point hikes (75 basis points), we may get half-point hikes (50 basis points).

Second, it will stay neutral – meaning it will pause the rate hikes.

Third, it will start cutting rates again. This will happen when it becomes obvious to the Fed that its actions are killing the economy.

And investors were certainly paying attention to Powell’s speech.

None of this guarantees we’re out of the woods yet…

These rallies could be bear market traps.

In other words, they could be luring in buyers who anticipate a more sustained rally that never shows up.

Again, no guarantees. But those are decent odds.

So, if you’ve been following our advice… and resisting the urge to panic sell… stay strong.

Even if the moment of maximum pessimism lies ahead… history shows that holding stocks through good times and bad… is the best way to grow your wealth.