How much lower will stocks go?

I spend a lot of time looking through the feedback you send in.

And I know that’s a question you and many of your fellow Legacy Research readers are asking right now.

And the Nasdaq-100 – packed with giant tech stocks like Amazon (AMZN), Apple (AAPL), and Microsoft (MSFT) – has fared worse.

Investors often define a bear market as a 20% or more fall from a peak. By this measure, the tech benchmark is in a bear market… and then some.

Especially if you’re just starting out as an investor and this is your fiercest market pullback.

But don’t worry. Here at Legacy, we’ve got your back.

Just like when stocks crashed at the start of 2020 on news of the coronavirus lockdowns… Teeka Tiwari, Jeff Brown, Dave Forest, and the rest of the team are working hard to help you through this challenging time.

I’m not just talking about helping you protect your wealth. If you know how to take advantage of them, bear markets are also fantastic opportunities to grow your wealth.

He spoke at our subscriber event in Washington, D.C., last month about how to handle stock market volatility. 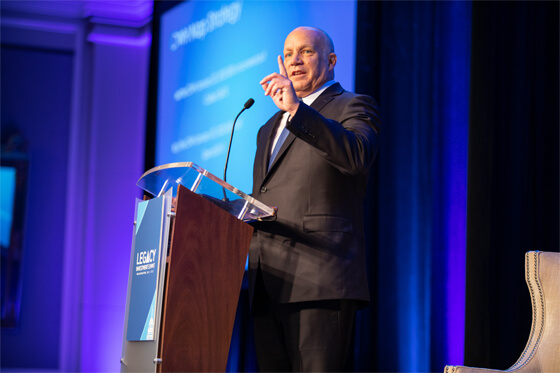 Jeff delivering his speech at our recent subscriber event

As you’ll see, he’s something of a bear market guru. And he’s out with a new trading strategy to help you profit in any kind of market environment… including this one.

Jeff made some of his biggest gains during the 2008 crisis…

That’s the year the subprime mortgage market melted down… Bear Stearns and Lehman Brothers hit the wall… and the S&P 500 plunged 38%.

Most folks yanked their money out of the stock market as fast as they could. But not Jeff…

He made his first trade when he was 19 years old.

He’d seen the dot-com bubble burst in March 2000 and lead to a 77% peak-to-trough fall for the Nasdaq.

And he knew he could make a lot of money during these times as a trader.

Back then, he headed up a trading advisory called The S&A Short Report with our colleagues at Stanberry Research.

And instead of panicking, Jeff used what he’d learned in the 26 years since his first trade to help his readers profit.

Boy, did it work out well…

As the worst of the crisis raged… and fears mounted that the world was facing another Great Depression… Jeff’s subscribers had the chance to make transformative wealth.

Jeff’s trading this year in The S&A Short Report was nothing short of heroic. He made 52 recommendations – all of them short-term trades. Out of these, 42 made money. A win rate of more than 80% in options trading is ridiculous. The average return of every trade was a bit more than 31%.

That’s outrageous when you understand the short duration of these trades and the turnover in the portfolio. How outrageous? The cumulative total return was greater than 1,700%.

When you short a stock, you’re betting its price will fall.

And it can be a powerful tool in your arsenal during bear markets.

But it’s not the only strategy Jeff uses to profit in times like now when stocks are falling.

He’s also racked up gains for his readers in falling markets by betting on rising, not falling, stock prices.

That’s due to something Jeff calls this the “rubber band effect.” I’ll let him explain it…

Imagine you have a rubber band, and you stretch it out. You let it go, and it snaps back. The same thing is true for stocks. They get extremely overbought or oversold, and the rubber band stretches. Then it snaps back.

I trade extremely “stretched” conditions. They tend to be high-probability, low-risk trades. I wait for the rubber band to be stretched to the downside. And I bet on it snapping back.

A lot of folks don’t understand it. But bear markets are just straight shots lower for stocks. You get these big plunges followed by fierce snapback rallies.

The numbers back it up…

Ned Davis Research looked at the period from 2001 to 2021. Over that time, half of the S&P 500’s biggest up days happened during a bear market.

That’s why Jeff likes to trade them so much. The rubber band stretches as stocks plunge. The snapbacks are wild. Back to Jeff…

The secret to making to making lot of money in a bear market is shortening your time frames and betting on the rubber band snapping back. If you can place a trade at 9:30 a.m. and sell out at a profit by 11 a.m., what the hell are you sticking around for?

You won’t be able to predict the exact bottom of a bear market drop. Or the top of a rebound rally. But capturing a half… or even a third of those moves… leads to fabulous gains.

It’s how I regularly closed out triple-digit winners in my model portfolio in 2008. I caught these explosive rebounds off the lows and rode them higher.

That doesn’t mean bear markets are good news for everyone…

If you’re not prepared, they can be brutal.

But for folks who know how to trade them, they can be surprisingly profitable.

So if you’re already a Jeff subscriber, make sure to pay special attention to his recommendations over the coming weeks. Now is a great time to be a trader because we’re seeing such big moves in stocks.

And if you’re not already a subscriber, you’ll want to tune into Jeff’s new presentation this Wednesday at 8 p.m. ET.

He’ll reveal what he believes will be the most reliable strategy of his career.

I won’t steal Jeff’s thunder. But it has to do with a 44-day window he’s spotted with dozens of opportunities to double your money, or more.

So far in back testing, Jeff has seen a 95% win rate. That’s impressive. And this isn’t just a strategy for bull markets. It works no matter which way the stock market is headed.

So go here now to reserve your spot. And see you at Jeff’s event Wednesday.