Welcome to the first weekly mailbag edition of The Daily Cut in 2021.

But our core mission remains the same. We’re here to keep you up to date with the best moneymaking and wealth-protection ideas from the Legacy Research team.

So if you’re a fan of Teeka Tiwari, Jeff Brown, Nick Giambruno, Jason Bodner, Dan Denning, Bill Bonner, Doug Casey, or any of our other experts, you’re in the right place.

Below, Casey Research analyst John Pangere lifts the lid on a little-known strategy he’s been using to hand our Strategic Investor and Strategic Trader readers the chance at gains of 698%… 2,805%… and 4,942%.

And Jason Bodner, who heads up our Palm Beach Trader advisory, shows why you should expect a short-term pullback in this overheated stock market.

But first, we turn to the “king of cryptocurrencies,” bitcoin.

Standing by with an answer is Casey Research analyst Nick Giambruno. Nick recommended bitcoin to his readers in 2018. Since then, it’s up 273%.

Like the other bitcoin bulls here at Legacy – Teeka Tiwari and Jeff Brown – Nick believes the rally is just getting started as bitcoin adoption ramps up.

But one reader is worried the feds may spoil the party…

Further, bitcoin has no central authority and no single point of failure [a part of a system whose failure will stop the whole system from working]. Instead, it runs on a decentralized and voluntary network scattered around the world on many thousands of computers.

With bitcoin, there’s no central location for a SWAT team to raid. There’s no capo to arrest. Governments can do nothing but play an endless game of whack-a-mole across the globe.

It’s impossible for the U.S. government, the Chinese government, or any government to kill bitcoin. It would have to shut down the entire internet everywhere in the world and then keep it off.

The cat is out of the bag. Bitcoin is bigger than any government.

Well, if the government can’t shut it down, won’t it ban bitcoin?

First, the idea that the U.S. government would want to throw peaceful people in cages for using bitcoin is an insult to anyone who values personal and financial freedom. It would be a sign much worse things are coming, and I would suggest leaving the country if such a thing happened.

Second, if the U.S. government tries to ban bitcoin, it would be an explicit recognition of bitcoin’s value and threat to the government’s control of money. Governments wouldn’t bother banning something that didn’t matter. That’s why I would consider it an enormous stamp of approval if a bunch of bureaucrats tried to ban bitcoin.

Third, in any case, banning bitcoin is impractical. Look at how successful governments have been at prohibiting cannabis over the decades. Despite their best efforts, cannabis has always been readily available in most big cities. Trying to enforce a prohibition on something intangible like bitcoin would be much less practical.

I’d like to see governments try to ban it and then fail spectacularly. It would be a volatile ride… but in the end, a massive reinforcement of bitcoin’s value proposition.

Here’s the bottom line. The U.S. government can’t stop bitcoin. It’s being forced to adopt a digital dollar because it recognizes other monetary goods that it does not control are starting to compete with the dollar, namely a digital yuan (China’s new digital-only currency) and bitcoin.

So the government’s going to adopt a digital dollar in the misguided belief it will help keep the U.S. dollar competitive. But that’s unlikely to happen. It will backfire and cause more people to go to bitcoin.

Either way, a digital dollar is coming soon. That means we are going to see more inflation and more bitcoin adoption. Position yourself accordingly.

Next up, a question on stock warrants. As I wrote you about here, warrants are ways to bet on stocks rising… with less money down and higher potential returns.

In other words, they’re great asymmetric bets. And they’re the best way to turn small grubstakes into potentially life-changing windfalls.

For instance, John Pangere handed our Strategic Trader readers the chance to make 4,942% in 20 months on one warrant trade. It’s piqued the interest of our readers… like this one below.

Reader question: What is the worst thing that can happen with a warrant? Is it just that you lose your entire investment if the warrants become worthless – or do you ever have to buy shares of the underlying stock under any conditions to “cover” the loss?

John’s response: Hi, Drew. Thanks for the question.

There are only two things you can do with warrants. Trade them or exercise them.

Just like stocks, they have unlimited upside. We’ve already seen this in our Strategic Trader advisory. We’ve handed our paid-up subscribers the chance to make gains of 698%… 2,805%… even 4,942%.

Here’s what I love so much about warrants. If the company that issues them does okay, its warrants will still be worth quite a bit of money. But if the company flames out, you’ve staked only a small amount anyway, so no harm, no foul.

And if the company really takes off, the gains from warrants are jaw-dropping.

When you buy a warrant, you will never have to exercise your warrant to buy the underlying stock. That’s why we like them as trading tools. They end up giving us a low-risk, high-reward setup.

We wrap up today with a question for Jason Bodner…

Jason was one of the few guys on Wall Street authorized to make trades worth $1 billion… and up. He now helps his subscribers profit in the stock market using a strategy he developed after he quit his job on Wall Street.

And he’s been knocking it out of the park in the Palm Beach Trader model portfolio. His top three open recommendations are up 303%… 532%… and 752%… with the longest holding period 30 months.

The average gain across the 20 open recommendations in the model portfolio is 114%.

Below, Jason responds to a question from a subscriber about how much cash to keep in an investment portfolio with the stock market at an all-time high…

Reader question: This is for Jason at Palm Beach Trader. If the market is overbought, how much do you think we should allocate to cash in our portfolios?

Jason’s answer: Frederick, thanks so much for writing in. Let me first say that our publishing policy prevents me from giving you personalized advice. So I’ll speak in general terms about where I see the stock market right now… and what that means in terms of an allocation to cash.

As you know, I use my Big Money Index (BMI) to track big-money buying in the stock market.

It’s all in the chart below. The blue line tracks U.S. stock market bellwether the S&P 500. The yellow line tracks big-money buying. Above the horizontal red line is overbought territory. 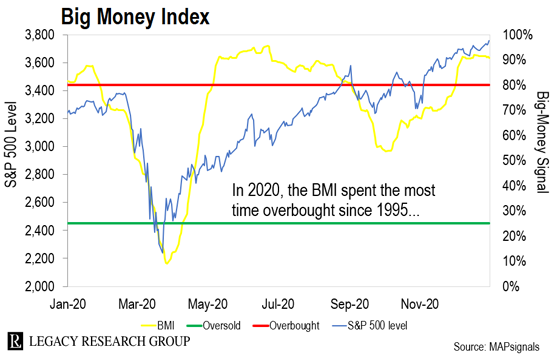 As you can see, the S&P 500 is heavily overbought right now. Money has been gushing in, pushing up prices and valuations.

The key is knowing when big-money investors are getting out of stocks while regular investors are still buying. That’s happening now. Which leads me to the following prediction: The stock market will start to fall this month and ultimately trough in April.

This isn’t me turning bearish long term. But when stocks go too far, too fast, in one direction, they snap back – like a rubber band. The same is true for when things get overly bearish and oversold, as we saw last March. After falling 34% over February and March, the S&P 500 is now up 70%.

Now to the question of cash…

Cash gives you the “ammo” you need to buy stocks in a correction like the one I see coming. When no one can take the pain anymore… and you start seeing money managers appear on CNBC calling for the end of the world – that’s usually when I recommend my readers pounce on high-quality stocks selling at bargain-counter prices.

I hope that helps, Frederick. Thanks again for your question. Happy New Year!

If you’d like to put a question to the Legacy experts, be sure to get in touch at [email protected].