Gold has suffered a setback…

I (Chris Lowe) bang on all the time about the opportunity ahead in gold and gold stocks.

The reason is simple…

Unlike the U.S. dollar and other government-issued currencies, gold supply is limited. Governments and central banks can’t inflate its value away.

That’s increasingly important now that governments are digitally “printing” the equivalent of trillions of dollars.

And as gold rises, gold stocks do even better (for reasons I’ll touch on below).

But it won’t be a straight shot higher. And last week, gold and gold stocks took a hit… 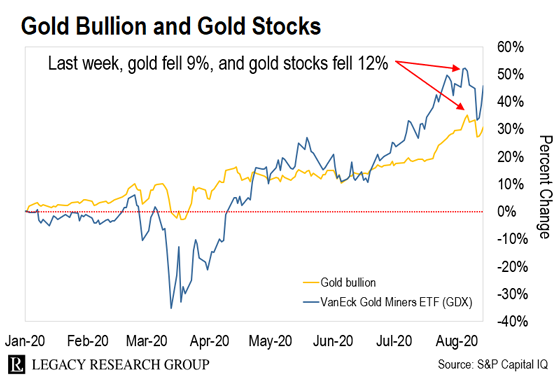 That’s nearly one-third of what it’s gained since its low for the year on March 18.

And after soaring as much as 134% from its March low, the VanEck Gold Miners ETF (GDX) – our regular stand-in for gold stocks – dropped 12%.

There’s been a lot of hand-wringing and teeth gnashing about this in the mainstream press. But as you’ll see today, this is a healthy correction… not the end of the gold bull market.

So if you’ve been meaning to buy gold but haven’t pulled the trigger, now is a great time.

That’s what billionaire investor Warren Buffett has been doing…

Buffett is one of the most famous… and most successful… investors alive.

His investment company, Berkshire Hathaway (BRK.A), has compounded profits at an annualized (or “smoothed out”) rate of 18% going back to 1988.

That’s partly because Buffett is a talented crisis investor. He made $12 billion following the 2008 global financial crisis. He bet big on banks Goldman Sachs (GS) and Bank of America (BAC) at the depths of the collapse.

This time around… he’s dumping banks and buying gold stocks.

According to a 13F disclosure filing released on Friday, he closed his entire Goldman Sachs position. He also sold about two-thirds of his stake in JPMorgan Chase (JPM). He unloaded about one-quarter of his position in Wells Fargo (WFC).

And he plonked down $563.5 million for 20.9 million shares of the world’s largest gold miner, Barrick Gold (GOLD).

Commercial banks create U.S. dollars when they make loans. They’re the only entities that can do this other than the Fed (America’s central bank) and the U.S. Treasury Department.

Barrick Gold produces what I like to call the “anti-dollar” – gold.

Last year, Barrick hauled 5.5 million ounces of gold out of the ground. That was roughly 4% of the world’s new supply.

Buffett’s position in Barrick is still a small part of his portfolio. But it’s a significant move. Buffett is a well-known gold naysayer.

So his Barrick purchase shows how this crisis has changed his thinking.

Buffett is usually a dollar bull and a gold bear…

That includes in the depths of the last crisis. Here’s what he said about gold in a CNBC interview in 2009…

I have no views as to where [gold] will be, but the one thing I can tell you is it won’t do anything between now and then except look at you.

So why… in this crisis… has he changed his stance?

The answer is Buffett may be a gold naysayer, but he’s no dummy.

His track record is proof he knows how to sniff out profits. And right now, he sees an opportunity in gold and gold producers.

On the one hand, you’ve got commercial banks.

They grow profits by loaning to creditworthy borrowers. But with the U.S. economy under assault from the coronavirus, fewer folks are taking out loans.

The value of loans on the books of all U.S. commercial banks is down by about one-third since this time last year.

Another problem for banks is interest rates are also on a downward path.

Without getting too far into the weeds, lower rates erode a bank’s net interest margin. It’s the “spread” – or gap – between what banks charge in interest on loans… and what they pay out in interest to deposit holders.

On the flip side, Buffett can see that we’re in a rising gold market. That means it’s a great time to own gold producers.

Gold miners give you extra “oomph” over the gold price…

As I explained in more detail here, when gold goes up 1x… gold stocks can go up multiple times more.

That’s why, over the past four gold bull markets, gold mining stocks have been the best place to be. 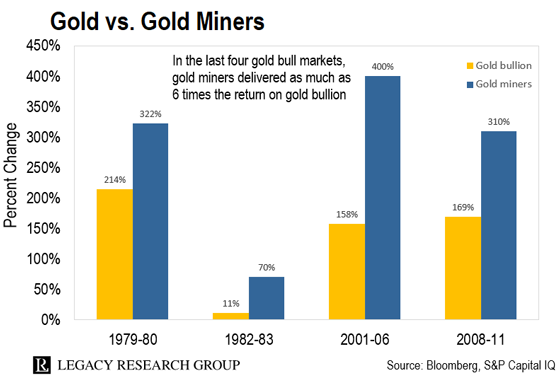 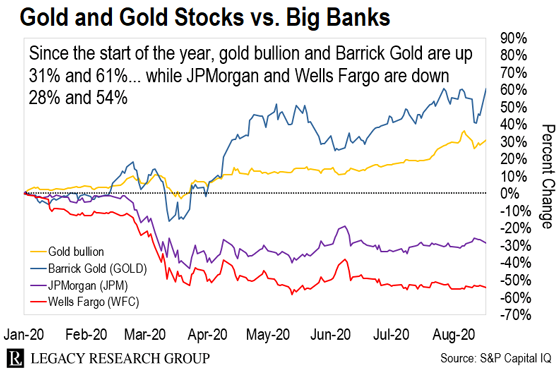 Since the start of the year, shares in JPMorgan Chase and Wells Fargo have tumbled 28% and 54%.

And as Teeka, Bill, Doug, Dan, Dave, Tom, and Nick have been reminding their readers… we can expect this outperformance to continue.

Governments globally are printing trillions of new dollars. The U.S. alone has pumped over $1.5 trillion into the economy since March. That’s significantly more than the total cash injection in the wake of the 2008 crisis.

And as the money-printer continues to go “BRRR,” we can expect gold to continue to climb.

A 9% drop is nothing to fear. Gold has been rising for 10 straight months. Nothing keeps going higher forever.

The median correction for gold in any given calendar year going back to 1980 is 14%.

Lower prices bring your cost of owning gold down. And it’s a simple law of math that the lower the price you pay for something, the higher your profits will be when you sell.

And don’t forgot to own some gold stocks along with your physical gold. You can do this through your regular online broker by investing in the VanEck Vectors Gold Miners ETF (GDX).

It invests on your behalf in 54 of the world’s leading gold mining shares.

Just remember… gold stocks are high-risk/high-reward bets. Invest only small amounts. And prepare for a bumpy ride along your path to profits.