Few investors have been paying attention to gold miners…

By contrast, gold mining stocks – as measured by the VanEck Vectors Gold Miners ETF (GDX) – are UP 19%. 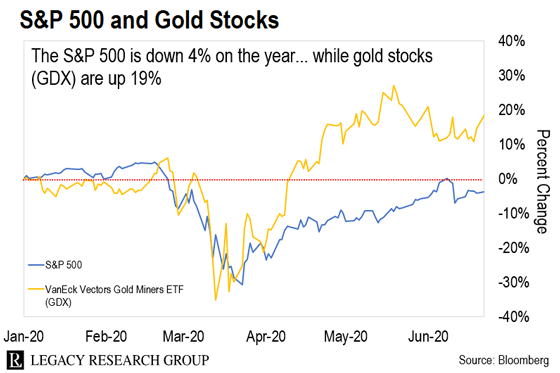 Despite these gains, gold stocks are still off the radar for most investors.

But as I (Chris) will show you today, that’s because they don’t have access to insights from our globetrotting commodities expert Dave Forest.

This year’s 19% gain for GDX – a broad play on the gold mining sector – is just the tip of the iceberg.

Each week, thousands of new readers sign up to one of the 17 paid investing advisories we publish at Legacy Research.

The Daily Cut is the premium e-letter we created in August 2018 as a bonus for paid subscribers. Our goal is helping you really move the needle on your wealth.

I don’t mean making enough money to pay the bills… go to a nice restaurant… take a vacation… buy a nice car… or pay down a mortgage.

I mean enough to ensure you never have to worry about money ever again.

That’s why, each weekday, I plug you into the top moneymaking ideas from Teeka Tiwari, Jeff Brown, Bill Bonner, Doug Casey, Dan Denning, Dave Forest, Nick Giambruno, Jason Bodner, and the rest of the Legacy team.

They have long track records of getting big-picture calls right… well before mainstream investors pile in.

Standout calls include Teeka recommending bitcoin back in 2016 ahead of a 4,340% run… Nick recommending legal cannabis stocks in 2017 ahead of a roughly 650% run… and Jeff Brown recommending gene-editing company CRISPR Therapeutics before it ran up about 330%.

Another megatrend we called early is the rise in gold…

We first put gold on your radar in these pages in August 2018.

It’s hard to imagine today how bearish investors were on the metal at the time.

The price of gold bullion was down 37% from its peak. Gold mining stocks – as measured by GDX – were down 72%. 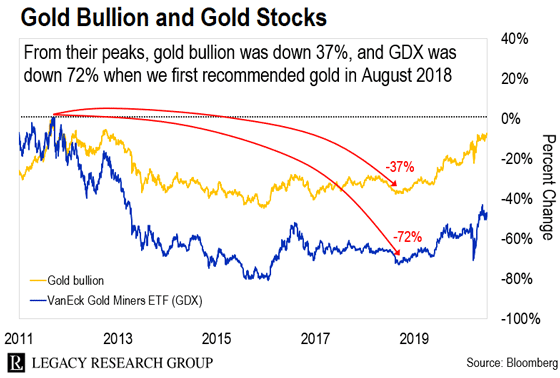 Things had gotten so bad that the Vanguard Group shuttered its flagship precious metals fund.

Investors were so done with gold… there wasn’t enough interest to keep the fund open.

But as mom-and-pop investors were throwing in the towel, industry insiders were turning bullish.

As we put on your radar at the time, our globetrotting geologist, Dave Forest, was picking up on some interesting chatter in the mining industry…

I think of him as the “Indiana Jones of Legacy.” He spends his time crisscrossing the world looking for buried treasures.

He even looks the part. Here’s a shot of Dave in Nevada, examining the rocks in an area that the NASA GOLD satellite system indicated was positive for copper and gold. 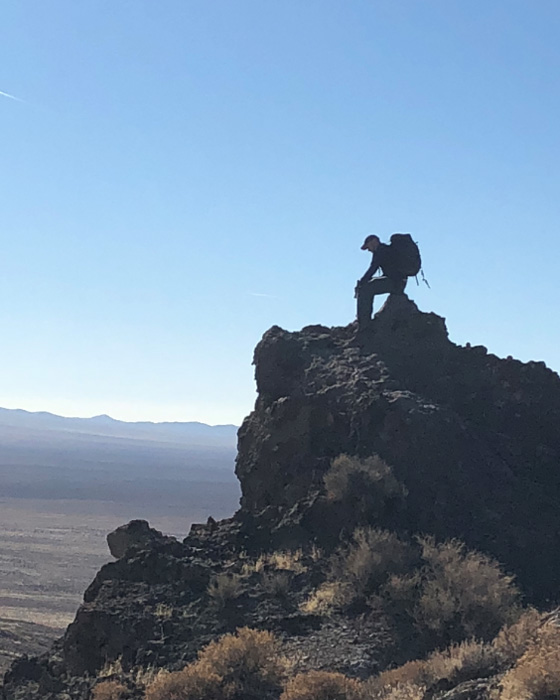 He helped develop the sixth-largest platinum-producing district in the world. He discovered more than 1 billion pounds of copper in Asia and South America. And he was the first natural-resource explorer the government of Myanmar (formerly Burma) licensed.

This gives him insights you won’t find in Bloomberg or The Wall Street Journal.

Public investor sentiment was in the ditch. But Dave was picking up on stories of mining industry insiders opening their wallets to fund new mines.

Many traditional brokers and funds have turned out the lights and closed the door on gold over the last few months. But the fall in the gold price has increased investment interest in some corners of the financial world.

For instance, after the gold price hit $1,250 in July – the lowest it’s been since December 2017 – it didn’t take long for me to find a group that was happy to commit $5 million to a gold mining project in Brazil.

They told me, “We really like gold. It’s so unpopular right now.”

That kind of enthusiasm among the industry’s inner circle – at a time when mainstream investors were crying uncle – made Dave prick up his ears. As he put it…

Public sentiment is horrible at a time when insider deals in the gold sector are running hot. And that’s extremely bullish.

Since then, the price of an ounce of gold bullion is up 45%. And our proxy for the gold mining sector, GDX, is up 83%.

Dave’s readers had the chance to make even bigger gains…

It’s been a stellar year for International Speculator subscribers.

The following three winners are above Dave’s buy-up-to prices now. But they show the power of buying best-in-breed miners at the right time.

Kinross Gold (KGC), a gold miner Dave recommended in March of last year, is up 93%.

His October 2019 model portfolio addition, Azimut Exploration (AZM), is up 571% after it discovered a completely new gold deposit in northern Quebec.

His latest portfolio addition, American Pacific Mining (USGD), is up 192% since he recommended it in a May 12 alert.

And he has 10 other triple-digit winners out of 48 open recommendations right now.

Gold stocks give you extra oomph over physical gold…

You see, gold mining companies have a fixed cost to mine. It doesn’t matter if gold is selling at $1,000 or $1,500 an ounce… that cost stays the same.

But a mining company’s profits explode as the price of gold rises. Let me show you what I mean…

That surge in profits makes that company’s shares surge, too. It makes gold miners some of the most explosive stocks in the world when conditions are right for a rally in the underlying metal.

If you haven’t acted yet, there’s still time…

Dave believes the rally in gold will play out over several years. And it’s still in the early innings, so it’s not too late for newcomers to get involved.

If you’re already an International Speculator subscriber, you can find the full list of Dave’s individual gold stock recommendations… along with his recommended buy-up-to prices… in your model portfolio.

And if you’re not yet a Dave subscriber, don’t worry. You can find out more about how to access his recommendations here.

Meantime, as a second-best option to the best-of-breed gold mining stocks he recommends, you can buy shares in GDX.

It won’t give you the same explosive gains Dave’s recommendations have delivered.

But it will give you broad exposure to the sector… and position you to profit as gold stocks continue to skyrocket.

P.S. Dave is always thinking about his next discovery. I found that out at our first annual Legacy Investment Summit in Bermuda in 2018.

I bumped into him at the hotel bar the night before the summit. He’d just come back from Brazil, where he bought rights to one of the highest-grade gold mines ever found.

But Dave wasn’t doing small talk. He was staring intensely at the Google Maps app on his phone. I asked him what he was looking for. He told me he was using satellite images of the Earth to hunt for ore deposits under the ground.

If you’ve used Google Maps, you know how crazy that sounds. And I have to admit, the details didn’t make a lot of sense to me. But Dave showed me the kind of lines and shading on the map that are telltale signs of ore deposits.

Dave told me how he’d found cobalt and nickel this way in Nevada. He “staked” the deposit. He went there with physical stakes and a camera to mark the area he’d spotted on the map.

Dave uses this same technique – harnessing a satellite to find gold deposits from space – to help him pick miners worth investing in. In fact, one of the companies this “Digital Treasure Map” identified is up 462% since Dave recommended it to his readers.

If you want to learn how to get in on this kind of gain, here’s the link again to find out more about International Speculator.