Regular readers know we’re always pounding the table on buying gold here at The Daily Cut. And for this week’s mailbag edition, we’re zeroing in on our favorite metal.

And globetrotting gold investor Tom Dyson offers insight on how to invest in the physical metal.

But first, we’re winding back the clock 50 years…

He had important news about the nation’s finances. And he needed to announce it before the market opened the next day.

To prevent a run on the gold in Fort Knox, he said the U.S. would no longer honor its promise to redeem dollars for gold.

This ended the gold-backed international money system in place since the Bretton Woods agreement of 1944. And it ushered in the paper-money era.

One of your fellow readers wants to know more about this change. For an answer, we turned to Bonner-Denning Letter coauthor Dan Denning…

Reader question: Could you please remind me of the real reasons Nixon separated the dollar from gold?

I was thinking it was to stop the outflow of our physical gold to foreign countries. That is, we had imported more than we could pay for in gold.

Being old enough to have watched Nixon reveal that on national TV, it sounded so reasonable at the time.

Dan’s response: Well, I could write a thousand words. Or ten thousand. But I thought this picture would do just as well. 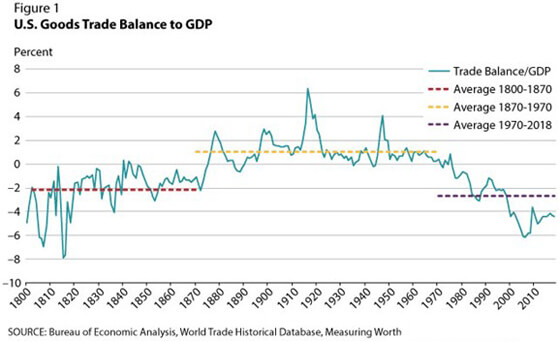 The U.S. started as a net importer and agricultural country, playing catch-up with Europe in the 19th century.

Then, the U.S. industrial boom… where it exported both raw materials and finished goods to the rest of the world. This “capitalized” the country and gave us our richest robber barons and best infrastructure.

And now… the U.S. is a net importer again.

Nixon had to end the convertibility of gold to dollars because the U.S. had become a much bigger consumer than it was a producer.

By 1971, the U.S. was importing manufactured goods from South Korea, West Germany, and Japan. Imports were greater than exports. Consumption was greater than production.

You could argue that this was structural… The U.S. was a mature industrial economy at the time, with relatively high labor costs. Meanwhile, other post-war economies were rebuilding from scratch.

Or you could argue that it was social… The U.S. had evolved into a welfare state after LBJ’s Great Society and Nixon’s wage and price controls to stem inflation.

But other than in 1975, the U.S. has run current account deficits (mostly driven by goods) ever since.

Under the Bretton Woods system of 1944, major currencies were fixed to the U.S. dollar. And the dollar was fixed to gold – which the U.S. had a lot of at the time.

Once the U.S. began running a balance-of-payments deficit, there were too many dollars abroad. This undermined global confidence that the dollar was a stable world reserve currency. High U.S. inflation didn’t help.

Nixon ended the run on the dollar by ending the gold standard.

In 1970, 85% of global reserve currency assets were denominated in dollars, according to the International Monetary Fund.

Last year, for the first time ever, that number went below 60%.

The dollar is slowly losing reserve currency status. The only questions now are what will replace it… and how long it will take. It’s a process we’ve dubbed Monetary Regime Change in The Bonner-Denning Letter.

We’re living off our accumulated capital (which is considerable) and the surplus on trade in services… mostly financial.

That’s the weird part. The most valuable American export has still been the dollar. That’s because those dollars come right back into U.S. stocks and bonds.

And for the last 40 years, they’ve generated much higher returns than almost any other country’s financial assets.

That’s what makes a financial crash so dangerous to the economy – and so scary to the Fed and the Wall Street elite.

If U.S. financial assets are no longer absorbing huge foreign capital flows – and making insiders and baby boomers fabulously rich – what on Earth is our economy going to do?

It’ll go to the Moon and leave the Earth behind. I jest, sort of.

But historically and structurally, you have to be hoping Jeff Bezos’ rocket ship to low Earth orbit kicks off a new era of American technological innovation and growth.

Here at the Cut, I (Chris Lowe) have been showing you how we’re about to go through a similar shock to the money system. And we believe gold is still one of the best ways to safeguard your wealth in times of crisis.

But one of your fellow readers isn’t convinced. So we turned to Crisis Investing chief analyst Nick Giambruno for more insight…

Reader question: I have never understood holding gold in a crisis. Governments can confiscate it and make it illegal to use as tender. It might be used for black market barter, but at what exchange rate, divisibility, and transportability?

Nick’s response: For thousands of years, gold has been the safe-haven asset. It’s preserved wealth through every kind of crisis imaginable. It will preserve wealth during the next crisis, too. That’s because it’s durable, divisible, consistent, convenient, and most importantly, it’s the commodity that is most resistant to inflation.

When you hold physical gold, no government can easily confiscate, nationalize, freeze, or devalue it at the drop of a hat.

Gold is universally valued. Its worth doesn’t depend on any government.

There is nothing particularly American, Chinese, Russian, or European about gold. It’s always been an inherently international asset. Different civilizations have used it as money for millennia.

And while you’re right that governments can confiscate gold – like the U.S. feds did in 1933 under the pretext of a national emergency – it would be pointless for them to do so again.

Today, only a tiny fraction of the U.S. population owns gold. Heck, I’d bet most Americans have never even seen a gold coin, much less appreciated its value.

This wasn’t the case in 1933, when the U.S. was still on a variation of the gold standard. That’s why the government probably won’t repeat the 1933 rip-off. It’s simply not worth the effort.

For proof, I suggest watching this video of a social experiment of average people on the street being given the choice between a candy bar and a gold coin.

If the government wants to confiscate wealth, it’s far more likely to go for the easy option… steadily debasing the currency by printing money. It’s a stealthy way to confiscate from savers.

Finally, a reader wants to know about investing in physical gold. For an answer, we turn to our globetrotting gold bug, Tom Dyson…

Reader question: Do you buy your gold in one-ounce coins, smaller fractions of those, or bars of bullion? Or do you just have some paperwork from a company showing you own some gold?

I thought the small coins would come in handy for bartering someday. I’d appreciate any suggestions.

Tom’s response: I bought the cheapest physical gold I could find. I looked at Krugerrands, Maple Leafs, and Chinese Gold Pandas. I looked into buying gold bars. I called a handful of dealers. And I calculated the price I was paying per ounce of actual gold. (Some coins aren’t pure gold.)

In the end, I found one-ounce American gold coins from the late 19th century and early 20th century were just about the cheapest way I could buy physical gold.

I was the type of kid who loved finding and collecting old pennies. So I went for the vintage coins over Maple Leafs, Gold Eagles, etc. But I wouldn’t have done this if they weren’t also the cheapest way of buying physical gold.

I also bought a basket of blue-chip gold and silver mining stocks and a silver ETF [exchange-traded fund].