Tech stocks are dominating in 2020…

As I (Chris) have been showing you, tech stocks got shellacked in the 2000 and 2008 recessions.

But in the 2020 “pandession” (a recession triggered by a pandemic), they’ve stood strong.

The next chart says it all. It’s of the change in market values of blue-chip tech stocks versus top blue chips in the banking, finance, and oil sectors.

Don’t worry if you’ve missed out. As you’ll hear today from our tech expert, Jeff Brown, the bull market in tech is still in its infancy.

So if you haven’t already, pick up some exposure now. (More on how below.) If Jeff is right, tech will outperform all other sectors over the next decade.

First, if you’re just joining us, it’s good to have you on board…

The Daily Cut is where you’ll catch the latest big ideas from the team of independent analysts at Legacy Research.

Our mission is to help you really move the needle on your wealth. That’s why we focus on tracking big-picture market trends.

As Teeka says, if you want to make a fortune… but you don’t have a fortune to invest… you need to invest in megatrends early on and stick with them.

That’s why we’ve spilled so much ink in these pages on the rise of the crypto economy… the rally in gold… and the wave of cannabis legalization sweeping North America.

And one of the most promising megatrends on our radar is exponential growth in tech.

It’s not just well-known tech blue chips such as Amazon, Apple, and Microsoft that are delivering gains.

Since he joined the Legacy team in 2015, Jeff’s given his readers the chance to close out gains of 259% on could-based electronic agreements company DocuSign (DOCU)… 278% on chipmaker Advanced Micro Devices (AMD)… and 332% on gene-editing company CRISPR Therapeutics (CRSP).

That’s the power of exponential growth…

If you follow Jeff, you’ll already know about this phenomenon… and how it drives rapidly accelerating profits.

But if you’re new to the conversation, don’t worry. It’s all in the diagram below. 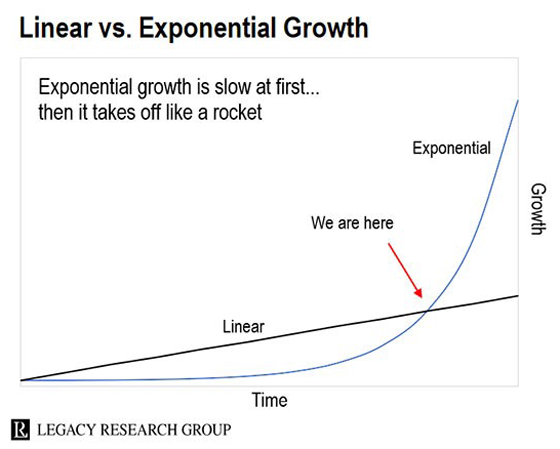 Linear growth – the black, straight line above – is the growth we understand intuitively. It’s stable and predictable. The future looks a lot like the past. And the pace of growth is constant.

That makes tech growth like the blue, curved line above. Here’s Jeff with more…

Exponential growth shows greater increases over time. The reason most folks don’t know about it is exponential growth stays nearly flat for a time. You hardly notice it. Then, suddenly, it forms this sharp “elbow” and goes almost vertical.

That’s what makes what’s happening in tech – and in particular, biotech – right now so extraordinary. The pace of innovation is accelerating on a monthly basis. Meanwhile, record levels of private capital are flowing into early stage companies.

I’ve never seen so many exciting opportunities. I know of no other sector that consistently keeps up with tech. A company that develops a new source of clean energy… a cure for COVID-19 or cancer… or a way to dramatically increase computing power… could double, triple, or even 10x your investment.

The classic example of exponential growth is Moore’s Law…

It’s named after Gordon Moore. He was the cofounder of chipmaker Intel Corporation (INTC).

In 1965, Moore observed that the number of transistors – or tiny switches – on a microchip doubled every two years. Today, this doubling of computing power happens roughly every 18 months.

More powerful computing as a result of more powerful chips… and the breakthroughs in materials and manufacturing that went with it… allowed chipmakers to dramatically shrink transistors.

In the late 1940s, we measured transistors in millimeters. Today, we measure them in tens of nanometers.

A nanometer is one billionth of a meter. So that’s a reduction factor of over 100,000 over 80 years.

Something similar is happening in biotech…

As Jeff explained Wednesday during a free online seminar, breakthroughs in biotech that would have previously taken years are now happening in days.

That’s because biotech companies are starting to use artificial intelligence (AI) and other bleeding-edge technologies to speed up the process of drug discovery.

Consider what Canadian early-stage biotech firm AbCellera did in March.

It took blood samples from patients who had recovered from COVID-19. It then used a type of AI called machine learning to screen more than 5 million immune cells in the samples. This identified about 500 antibodies that helped the patients fight off the virus. Jeff…

These antibodies could be the key to treating COVID-19. And AbCellera used this as a starting point to create an antibody therapy that could potentially cure the disease. Historically, this process would have taken years to accomplish. It took AbCellera 11 days.

That’s exponential growth in action. And it’s just one of dozens of examples…

So how do you play it?

So if you don’t already, make sure to follow Jeff’s insights on those in his free tech-investing e-letter, The Bleeding Edge.

You can also get into tech stocks via the ETF route.

Exchange-traded funds (ETFs) trade like regular stocks on an exchange. But they give you exposure to an index of stocks such as the Nasdaq.

Jeff is not a fan of ETFs because they give you only broad exposure to tech. And he prefers to target gains in best-of-breed companies in the most explosive tech niches.

But if you’re not interested in maximizing your gains in tech… and you still want some exposure to this broad trend… consider a tech-focused ETF.

You can do that by way of the Invesco QQQ Trust (QQQ). This ETF mimics the performance of the stocks in the tech-heavy Nasdaq-100 Index.

These aren’t stocks issued by scrappy startups fraught with risk. They’re in well-established multinationals that generate billions of dollars in annual sales.

Four of them – Apple, Microsoft, Amazon, and Google parent Alphabet – have market values of more than $1 trillion. But unlike most regular blue-chip stocks, these tech blue chips have the power of exponential growth behind them…

If Jeff is right about the rise of tech, as we hit the elbow phase of exponential growth, the next decade could see even more dramatic gains.

If you do want to maximize your gains in tech, that’s the place to start.

Thanks to the federal government, stocks in this subsector have a preset “timer” attached to their share prices. When the timer hits zero, these stocks can climb hundreds of percent in a matter of days… and sometimes hours.

Jeff spent five years crafting a proprietary system to identify and trade these timed stocks. And he’s used it to identify four with timers set to hit zero within the next two months.

It’s all in the replay of last week’s big event. Go here now to watch it.