Tech stocks are in a bear market… and then some…

That’s going by the Nasdaq. It’s crammed with mega-cap tech stocks such as Apple (AAPL), Microsoft (MSFT), and Google (GOOG).

The common definition of a bear market is a 20% or more fall from a peak.

And after five straight weeks of brutal selling, the Nasdaq is now down over 27% from its peak last November.

Folks, the mainstream financial press are running around in a panic. So are mainstream investors.

“Investor sentiment in Silicon Valley is the most negative since the dot-com crash,” David Sacks, a venture capitalist in San Francisco, told CNBC over the weekend.

So if you’re looking at the tech stocks in your portfolio and feeling queasy, I don’t blame you.

But as you’ll see today, pullbacks like this are par for the course for the Nasdaq.

So instead of offloading tech stocks you already own, you should use this opportunity to get in on your favorite tech megatrends at discounted prices.

Since it launched in 1971, the Nasdaq has been a bumpy ride…

You can see it in the chart below… 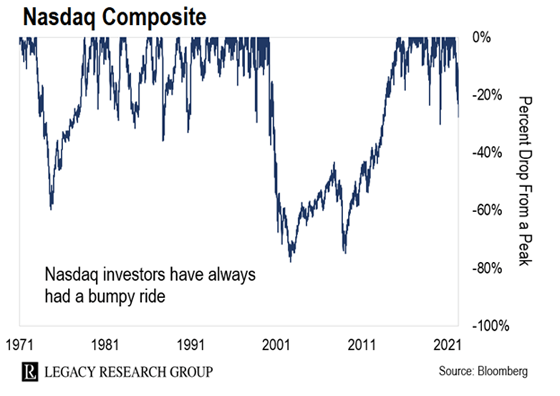 Those are some bone-crunching drops.

The Nasdaq dropped between 10% and 20% on average every two years.

It dropped between 20% and 30% on average every four years.

And it dropped 30% or more every seven years.

But investors who stayed the course over that 50-year-period could’ve grown their wealth by 11,594%.

And you didn’t need to have invested in 1970 to make transformative gains. Over the last decade, coolheaded investors could’ve bagged a return of 630% by just holding a Nasdaq-tracking index fund.

It’s something Jeff Brown has been warning about.

If you don’t already know him, he’s a former Silicon Valley insider and early-stage tech investor.

He joined the Legacy team in 2015. And ever since, his mission has been to help you and your fellow readers profit from the exponential growth in technology.

And he’s wildly bullish on the tech sector over the next decade and beyond.

But last year, Jeff warned that some high-flying tech stocks were trading at nosebleed valuations… and were due for a tumble as a result.

In September 2020 it had the biggest IPO (initial public offering) in history for a software company.

Its shares were supposed to sell at $80 a share when it went public. But there was so much hype around the IPO, it was impossible for regular investors to get in for less than $245 a share.

This put Snowflake at a shocking valuation. As Jeff explained when I talked to him about it last June…

At $245 a share, investors were paying 177 times annual sales. That means it would have taken 177 years of sales to reach the valuation SNOW traded at straight out of the gate.

To give you a 20-year payback, that company would have to pay you 100% of its sales revenue for 20 straight years in dividends. And it can’t do that because it still needs to pay its employees’ wages… cover other costs… and deal with tax liabilities.

So 20 times is already quite high. Anyone investing at 177 times sales will lose an absolute fortune.

Since that warning, SNOW has fallen 44%…

And other overvalued tech companies Jeff singled out have also been badly beaten.

Video chat service Zoom (ZM), for instance, is down 73% over the same time. And cloud-computing company Fastly (FSLY) is down 92% from its high in October 2020.

That doesn’t mean the gains in tech are over…

It just means that some of the froth is coming out of the Nasdaq… as we see every couple of years.

That’s always unpleasant to go through.

That’s why Jeff put out this quick video update to his readers yesterday.

If you have money invested in the tech sector right now, I strongly recommend you watch it. It’s a great overview of what’s going on… and why the sell-off will likely be short-lived.

He’s uncovered a way to get in on one of the most powerful tech megatrends we follow – the rise of blockchain – alongside the smart money.

It’s what he calls “crypto placements.” These are ways you can invest in the world’s most exciting crypto projects in their early stages… much like venture capital (VC) investors do.

As Jeff has been showing his readers, if you get in early on a good investment, you can compound your gains with each valuation increase as a company grows.

And next Wednesday at 8 p.m. ET, in a new online presentation, he’ll reveal how an upcoming event could yield even bigger gains…

So be sure to secure your spot here.