Chris’ note: As regular readers will know, one of the top speculative opportunities on our radar right now is in IPO stocks. That’s when stocks first become available to regular investors on a public stock exchange.

But not all IPO strategies are created equal. Tech expert Jeff Brown has been giving his readers the chance to profit in an unusual way. And it has nothing to do with following the crowd and buying popular stocks on the days they go public. As he makes clear in the insight below, that’s a surefire way to get ripped off.

If you’re considering speculating in IPO stocks, please pay special attention to Jeff’s warning. And make sure to join his free IPO seminar next Wednesday. It’s all about the “Penny IPO” strategy he’s developed and why now is the perfect time to invest. Sign up for that here.

One simple illustration from history will show you what I mean…

That’s when regular investors can buy shares for the first time on a public stock exchange such as the New York Stock Exchange or the Nasdaq.

And at the time, it was still a small company. Its market value was just $438 million.

But look how things have changed… 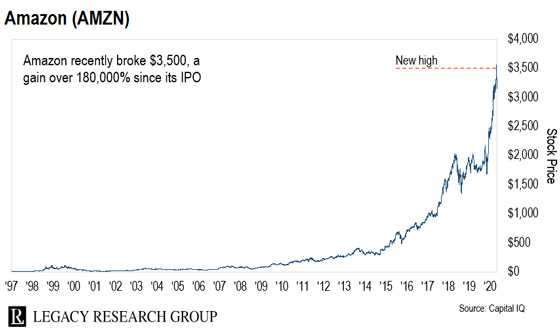 Now, Amazon is the world’s fourth-most valuable company. It’s worth north of $1.5 trillion. On a split-adjusted stock basis (accounting for newly issued shares), Amazon shot up from $1.54 a share to more than $3,500.

The best part… anyone with a brokerage account could have enjoyed those gains.

But sadly, the opportunity to invest early has almost disappeared.

It went public in May 2019 at $45 a share. But Uber was nearly nine years old at that stage. That’s three times older than Amazon was when it had its IPO.

By the time its IPO day rolled around, UBER already had a market value of more than $74 billion.

That’s more than 168 times what Amazon was worth when it went public.

And where is UBER today?

Its shares trade at about $36 and change. That’s 20% less than when it went public.

And it isn’t forecast to turn a profit until 2024.

Investors at the IPO got their faces ripped off by Wall Street.

We’ve seen a similar pattern in many of the “hot” IPOs that have emerged in recent years. Because they’re already so big when they go public, it’s nearly impossible to find opportunities with the same potential as Amazon 20 years ago.

Uber competitor Lyft (LYFT) is down 61% from its IPO at the time of writing. And The We Company, of WeWork infamy, ended up indefinitely delaying its IPO. It’s now down more than 90% from its peak valuation in the private market.

Don’t Get “Locked Out” of the Best IPOs

So where have all the good investments gone?

Where is the chance to invest in the next Amazon?

They’re still out there. But 99% of retail investors are “locked out.”

Venture capitalists (VCs) and private equity firms have been working hard to keep exciting companies private as long as they can.

This allows them to capture the majority of the investment upside while selling overvalued shares to the public.

That’s because the largest investment gains come from investing at the earliest stages and selling when a company becomes a multibillion-dollar corporation.

Sometimes a company will stay private for a decade or more. Then, when the company has become overvalued in the private markets, private investors push it to go public so they can dump their shares on retail (regular) investors – often at an even higher valuation.

But regular investors are left with the equivalent of table scraps. In some cases, they’re buying into companies that are overhyped and way overvalued. This is a surefire way to lose money on an investment.

That’s why, for the last five-plus years, my goal has been to change that. I’ve been on a mission to find a way to bring the best early stage investments… companies with the potential to bring investors life-changing gains… to my readers.

And I think I’ve found the answer…

It’s all in a small subsector of the tech market, a class of stocks I call “Penny IPOs.”

Compared to huge, billion-dollar companies like Uber… these stocks are still minnows when they go public.

This gives them the same kind of potential Amazon had back in 1997.

I’ve seen these stocks jump hundreds – and on occasion even thousands – of percent in a single day. But hardly any investors know they exist.

What’s even more exciting… this tiny IPO subsector is approaching a special time I call the “4X Window.”

That’s when we’ll see these explosive stocks go into hyperdrive.

It’s a chance I don’t want you to miss out on.

I’ll show you why these stocks can be so powerful… share what exactly the 4X Window is… and reveal how you can add these trades to your portfolio right away.

Go here to reserve your spot. I hope to see you there.