Are you a news junkie?

If you are… you’re probably making one of the biggest investing mistakes there is.

“You can find good reasons to scuttle your equities in every morning paper and on every broadcast of the nightly news,” he warned.

What he was getting at is that most folks panic sell their stocks (equities) based on nasty newspaper headlines. So they rob their investments of a necessary ingredient – time. And they wind up losing money.

Lynch is worth paying attention to.

He headed up Fidelity’s Magellan Fund between 1977 and 1990. Over that time, he earned an annualized return of 29%.

That’s more than double the return of the S&P 500.

Why am I (Chris) telling you this?

It’s not to stop you from watching the news…

It’s to show you that thousands – maybe even millions – of investors are making this mistake right now.

And they’re creating a great opportunity for you to reap some big wins in a specific category of beaten-down stocks.

This makes it a decent proxy for the legal cannabis sector. And it has fallen off a cliff… 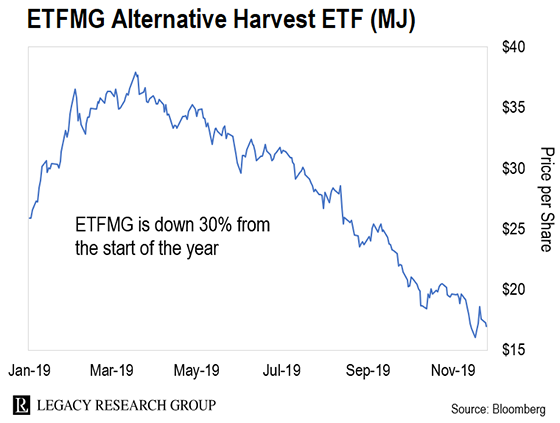 As you’ve probably seen, folks are using pen-shaped battery-powered devices to vaporize liquids and inhale them.

It’s a way to consume cannabis without inhaling any smoke.

It’s long been considered a healthier alternative to smoking. But since March, there have been 47 reported deaths in the U.S. from vaping. And 2,290 Americans have suffered serious lung injuries.

The Food and Drug Administration (FDA) and the Drug Enforcement Administration (DEA) have started investigations into these vaping-related deaths. And the Centers for Disease Control and Prevention (CDC) has warned folks to stop using vape pens.

Meanwhile, each week, new cities are passing legislation that bans vaping products. President Trump has even considered a federal ban on sales of vape pens to minors.

Naturally, investors are concerned. Vaping products account for about 25% of overall cannabis sales.

The deaths and injuries are tragic. That’s easy to agree on.

But as we covered here, it’s not legally produced vapes from regulated companies that are responsible. It’s people buying black-market vape liquids in states where cannabis is illegal.

So, this is not a long-term threat to cannabis companies… even if that’s what folks in the mainstream press are saying.

Tune out the hysteria the mass media spreads about vaping, and you’ll pick up on some less attention-grabbing developments that are positive for legal pot stocks.

Right now, cannabis is illegal at the federal level, but legal in some form in 39 states plus Washington, D.C.

But last Wednesday, for the first time in history, a congressional committee approved a bill to end more than 80 years of federal cannabis prohibition.

The House Judiciary Committee passed the Marijuana Opportunity Reinvestment and Expungement (MORE) Act by 24 to 10 votes. And it was bipartisan. Among those who voted in favor of the bill were two Republicans – Matt Gaetz of Florida and Tom McClintock of California.

This sets the stage for a full floor vote in the House on ending the federal ban on cannabis.

There’s good news out of the Senate, too…

Republican senators are pushing for action on a separate piece of bipartisan legislation.

It’s called the Strengthening the Tenth Amendment Through Entrusting States (STATES) Act. It doesn’t formally remove the federal ban on cannabis like the MORE Act would. But it prevents the feds from butting in on pro-cannabis state laws.

And it’s not just in the U.S. where the legalization wave keeps rolling.

That means legalization in Mexico – a country with a population of 126 million – is now not a matter of if, but of when.

What should you do about it as an investor?

It’s important to recognize a massive trend and where we are in it. The earlier you get into a trend, the more money you’ll make as the market flip-flops between fear and fantasy.

We’re still in the early innings of legal cannabis. But to be clear, there’ll be more volatility and negative headlines ahead as this space develops – along with lawsuits and aggressive reports from short-sellers.

That means we’ll see a pattern of fear and fantasy alternate for years. Meanwhile, the stocks in the sector could go up five, 10, or even 100 times or more.

But there’s a right way and a wrong way to invest.

The key to long-term gains is rational position sizing…

Keep your position sizes small when it comes to speculations.

And make no mistake: Pot stocks are speculations. They shouldn’t make up a large portion of your portfolio.

Teeka recommends you invest no more than $400 per idea for smaller accounts… and between $500 and $1,000 for larger accounts.

Rational position sizing limits your downside. This allows you to ignore the negative headlines – and the price swings – along the way.

Instead, you can concentrate on the big picture. And as Teeka has been showing his readers, the big picture is that legal cannabis is the definition of a massive, unstoppable trend just getting started.

That means outsized returns if you have the patience… and the fortitude… to ride out the nasty news headlines along the way.

Here’s more on how you can profit…

To be clear, there’ll be more volatility and negative headlines ahead as this space matures. But as Teeka says, we’re still in the early innings with legal cannabis…

To take advantage of the recent sell-off, look for cannabis companies with at least double-digit sales growth, little debt, and cash and equivalents making up 20% of the market cap.

If you’d like broader exposure, consider a small stake in the MJ. It holds a basket of the top cannabis plays. And when the violent rebound comes – which it will – shares will shoot higher.

Switching gears, our tech expert calls it the single greatest breakthrough of his career…

Jeff Brown has been tracking the progress of CRISPR gene-editing technology for his readers since he came on board here at Legacy Research.

And readers of his small-cap-focused tech advisory, Exponential Tech Investor, are up 366% since Jeff added leading gene-editing stock CRISPR Therapeutics (CRSP) to the model portfolio in October 2016.

Up until last week, we hadn’t seen clinical trial results on humans that confirmed CRISPR’s powers to cure diseases.

This is the first confirmation that CRISPR works on humans. And it’s going to revolutionize medicine.

I’ll have more for you tomorrow on this breakthrough in your regular Daily Cut dispatch.

In the meantime, make sure to check out Jeff’s urgent briefing on how to profit from this setup.

It’s something Jeff was so keen to get in front of you, he recorded it… audio only… at a studio in his hometown.